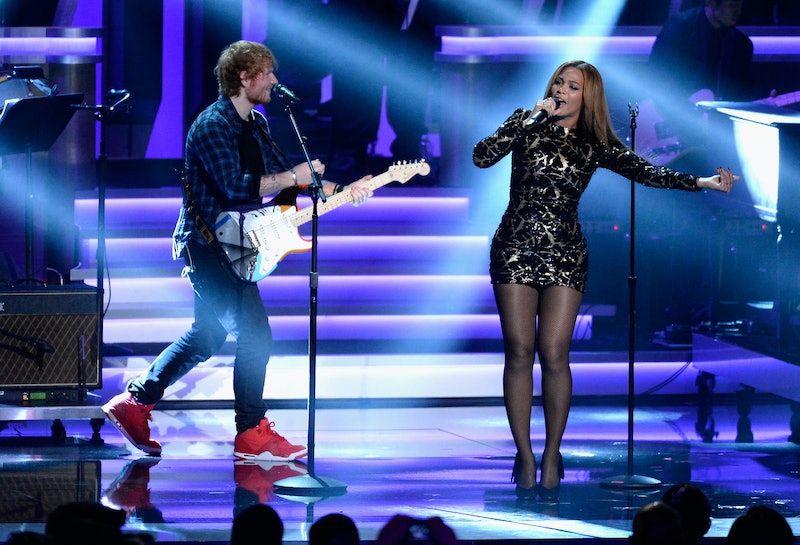 On Tuesday night, something magical happened in Los Angeles — yes, even more magical than last weekend's Grammys. As I so obliviously ate Chipotle while watching New Girl, Beyoncé and Ed Sheeran performed in a Stevie Wonder tribute concert, and, by all accounts, it seems like it was (obviously) absolutely amazing. According to E! Online, Beyoncé jumping on stage to perform was a total surprise, and people at the event thought she and Jay Z were just there to enjoy the show. Well, enjoy the show they did, because onlookers say that, when Wonder took the stage himself, Beyoncé pulled out her best T. Swift moves and "went all out with her dancing." Naturally.

And Beyoncé and Sheeran weren't even the only celebs there, although the event would've still been stellar if they had. Lady Gaga and Tony Bennett also performed together, and artists like John Legend, Ariana Grande, and Ne-Yo were there to pay tribute to Wonder, too.

But, anyway, back to Beyoncé, because that's what really matters. She performed Fingertips Pt. 2, Master Blaster (Jammin'), and Higher Ground with Sheeran, and, If you're as disappointed as I am that your invitation got lost in the mail — even though the concert happened less than 24 hours ago, we're in the age of information, baby. Videos have already materialized, and they are incredible.

Obviously, Bey looked (and sounded) fantastic in her Michael Costello minidress, and I am eternally jealous I will never be able to pull a look like that off. Sigh. Only Beyoncé. And Sheeran also turned to Instagram to post about the event, as you do when you've spent an evening with the queen.

Even better news? We get to see the whole thing soon enough. Stevie Wonder, Songs in The Key of Life: An All Star Grammy Salute is airing Monday, February 16 at 8 p.m. EST on CBS. If you need me the next morning, you can find me passed out on the floor as a result of being hit with so much greatness all at once.