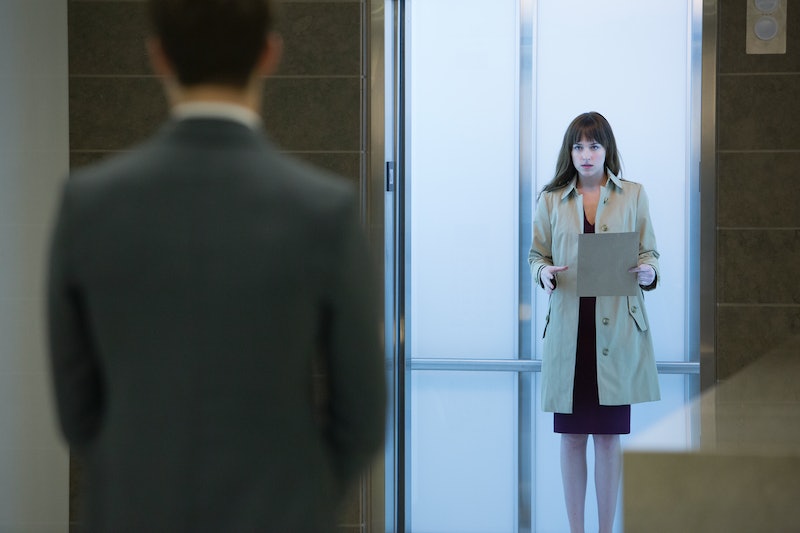 We know about the kinky sex in Fifty Shades of Grey. And we know about the weird non-disclosure agreements and sex contracts. But does it lead to anything, or is it all just an excuse to see Jamie Dornan shirtless and Dakota Johnson biting her lip over and over again? In other words: How does the Fifty Shades of Grey movie end, and is it the same as the book? After all, there are some sequels on the way, so the movie has to end in a way that it feels satisfying, yet also tees up the next film. They couldn't mess around with the book too much, could they?

I know a spoiler warning should go without saying here, but I mean it: I'm about to spoil the end of the movie. Even if you've read the books, make sure you don't want to be surprised by the movie's ending before you continue reading — it may or may not be different (something I won't yet confirm nor deny). I know I'm offering you some instant gratification, but if Fifty Shades of Grey has taught us anything, it's that there's at least some degree of pleasure in anticipation and waiting (um, among other things).

Everyone still here? I knew you wouldn't be able to stay away.

OK, the movie ends like this: Anastasia Steele (Dakota Johnson), having experienced the worst that the "Red Room of Pain" has to offer, decides she can't be with Christian. He tries to convince her, but her mind is made up, and she gives back the car and asks for the money for the old Beetle he sold without asking. (Which, if I can editorialize here for a second, is totally not cool.) He follows her as she heads to to his private elevator to leave his apartment, and tries to follow her inside, but she stops him with an emphatic "No!" Then, as the doors close, he says, "Anastasia," and she says, "Christian" — mirroring the way they parted at the elevators when she first meets him — and that's it. Hard cut to credits.

I understand that the ending of the movie is the same as the ending of the book, in broad strokes, but different in the details. (Again, spoilers for the book ahead.) In the book, Ana also decides to leave Christian, gives back the gifts he gave her, and gets the money for the Beetle. But the book doesn't stop at the elevator. It follows her all the way home, and ends with her crying in her apartment.

Personally, I happen to love the ending of the movie. I like it even though EL James insisted that Anastasia say "stop" instead of "red," which is her safe word. Director Sam Taylor-Johnson wanted the last word to be "red," but ultimately, James won. "Red" would've been even better that "stop," IMHO. Regardless, the ending was basically my favorite part. Not only am I a sucker for the whole elevator-callback thing, it ends on a moment of strength for Anastasia. She made the decision to leave. She has agency. It's abrupt, and she stands firm. To me, that's all way better than watching her bawl in bed.

More like this
10 Must-Read New Books Out This Week
By K.W. Colyard
'The Summer I Turned Pretty' Book Ending Is An Emotional Rollercoaster
By K.W. Colyard
The 'Spiderhead' Movie Ending Is Nothing Like The Short Story It’s Based On
By Morgan Leigh Davies
At 14, Bryce Dallas Howard Was Being Grounded From Set
By Olivia-Anne Cleary
Get Even More From Bustle — Sign Up For The Newsletter