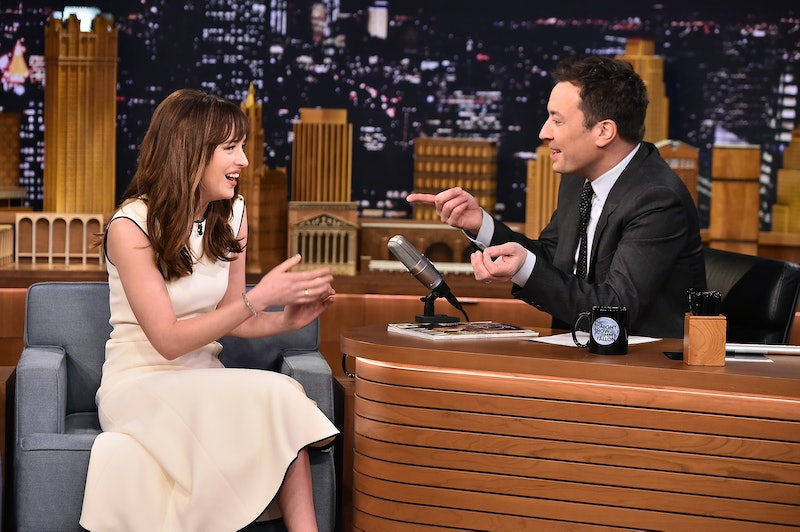 It's Fifty Shades of Silly. Though Dakota Johnson's role of Anastasia Steele in upcoming movie Fifty Shades of Grey is not meant to be a humorous one, the actress let her full-fledged funny side out on The Tonight Show with Jimmy Fallon on Tuesday night. The day after Johnson's costar Jamie Dornan, who plays Christian Grey in the movie, came on the show to read passages from the book in a variety of accents, she made an appearance on the show to do a little bit of hilarious reading herself — this time off-script. Dakota Johnson and Jimmy Fallon played "anything can be sexy," a game where they each picked cards from a deck at random and read whatever was written on the card in their sexiest voice possible. And of course, all of the phrases written on the cards were decidedly un-sexy.

Both Johnson and Fallon manage to pull off serious readings of the sexless phrases, and although neither of them was exactly "steaming up the lens," as Fallon cheekily said, it was a hilarious chance for them to show off their acting chops. Since there wasn't a clear winner announced in the game, it's only fitting that the phrases are ranked in order of both hilarity and the speaker's ability to keep a completely straight face. Check out the (very subjective) ranking below.

6. "Excuse me while I go slip into a pair of old sweatpants."

Why it's placed here: Granted, this is the first phrase she tries out, but she could have amped up her serious expression a little more for this sentence. It comes off as slightly dry — which it is, but that's not the point of this game.

Why it's placed here: The Star Wars reference is funny and all, but Fallon doesn't seem to fully commit to making this phrase sound sexy. It comes off as scripted.

4. "Sure, I'd love to take off my underwear. But you'll have to excuse the cloud of Gold Bond powder."

Why it's placed here: This one is much funnier, albeit a little nasty. I must say, the wink that he adds at the end of the phrase really helps his case, though.

3. "Excuse me, sir, but this strawberry-flavored chapstick just fell out of your fanny pack."

Why it's placed here: She does a dramatic pause before "fanny pack," which is an awesome lead-in for the only two words that really makes the entire sentence funny. (Sorry, tourists!)

2. "I want to go fishing this afternoon. Do you know where I can buy grubs or worms?"

Why it's placed here: This almost seems like a nod to the hardware store scene in Fifty Shades, so kudos to Fallon if that's the case! His deep voice paired with the soulful stare into the camera lens is perfect humor for the funny request — no cable ties or rope here!

1. "Let's go to Red Lobster. I'll get the Cheddar Bay biscuits, you can get the Popcorn Skrimps."

Why it's placed here: The actress not only pulls off the word "skrimps" with a convincing southern twang, but also couples her line with a hair flip. Everyone knows a dramatic hair flip can seal the deal, after all. Even for Red Lobster.

Check out the full round below and see if you agree!