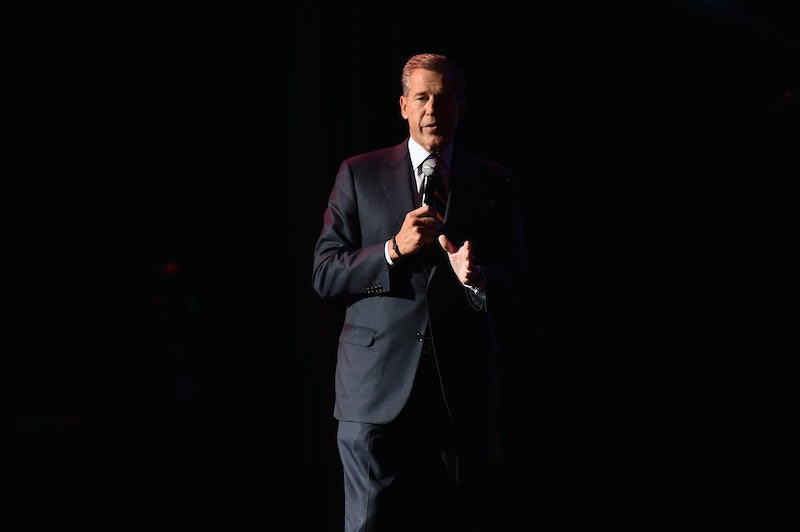 If you somehow missed it, Brian Williams is in hot water over the revelation that he falsely claimed to have been on a military helicopter downed by rocket fire in Iraq. Now, Williams is taking a leave of absence for the next six months without pay, leaving his future at NBC News in question. He isn't the first anchor to step down amid controversy, but what does past anchors' rises and falls indicate about Williams' future at NBC — and, for that matter, in the news industry?

There's some precedent here. Former CBS news anchor Dan Rather started his own firestorm when he used false documents to question the National Guard service of former president George W. Bush. Ultimately, he resigned (that's not too encouraging) and is now offering some words of support for his fellow disgraced anchor. Rather told Politico that Williams is "an honest, decent man, an excellent reporter and anchor — and a brave one." I'm not sure how his testament will help matters.

Diane Sawyer left her spot at ABC News in September, though not amid any controversy. She cited her interest to report on more in-depth subjects, but there has been speculation that her poor ratings might have prompted her to abandon her desk. If a trusted anchor, whose journalistic integrity has not been challenged, managed to lose her position — if the poor ratings speculation is true — then William's loss of credibility poses tremendous challenge to him regaining his nightly spot.

Still, he seems pretty confident about returning in a released memo to staff:

Upon my return, I will continue my career-long effort to be worthy of the trust of those who place their trust in us.

Even if William's plans don't work out with NBC, a news show isn't necessarily out of the question for him. Dan Rather now anchors a weekly show on AXS TV, a satellite channel. OK, you may not recognize the name, but it's still a job. Let's face it — that's something Williams may not be too picky about if a deal doesn't come through.

Now that John Stewart is leaving The Daily Show, a new anchor is needed for the show; perhaps Williams would be a better fit at Comedy Central. During Stewart's announcement, he said: “I am a terrible employee. But in my heart I know it is time for someone else to have that opportunity.”

Maybe Williams stands a chance at being that someone. OK, this probably won't happen, but given past precedent, it doesn't seem too likely that he'll be seen around the NBC water cooler, either.