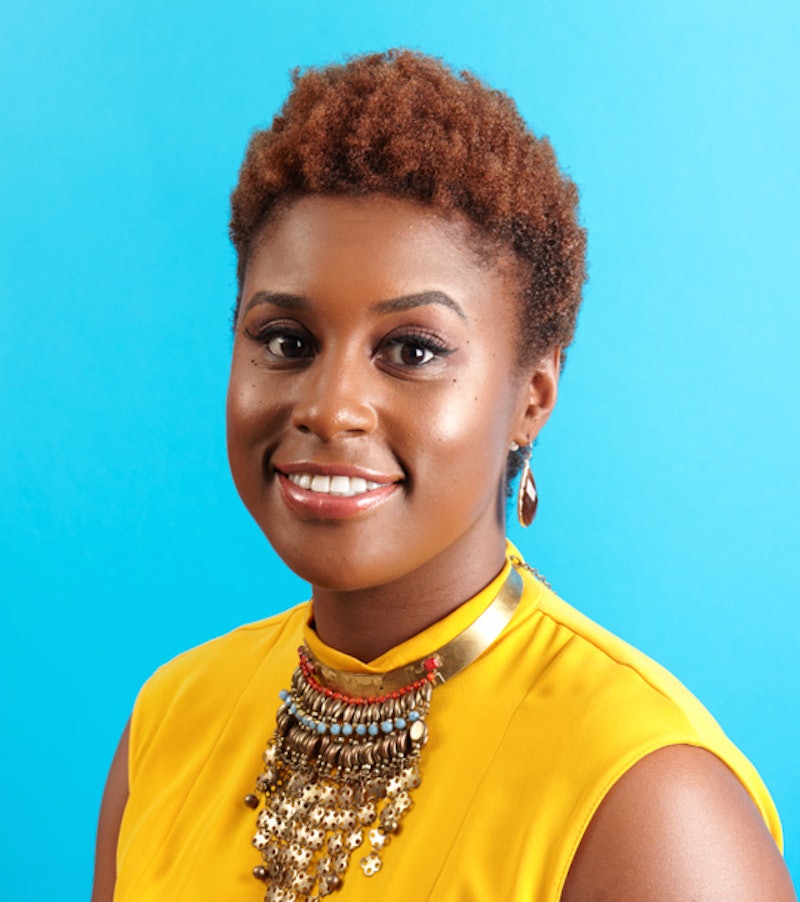 “It all feels pretty surreal,” says writer/actress/director/author Issa Rae right before the launch event for her first book, The Misadventures of Awkward Black Girl, at The Last Bookstore in downtown Los Angeles. “I’m just taking it all in.”

You’d think Rae would be used to the attention by now. She busted onto the scene when her Web series The Misadventures of Awkward Black Girl went viral a few years back. Her work caught the attention of people like Shonda Rhimes, Pharrell, and Larry Wilmore, and her YouTube content has over 25 million views — and counting. She’s said that the idea for the series was inspired by a magazine article she read called “Where’s the Black Liz Lemon,” referring to Tina Fey’s smart but bumbling 30 Rock character. Rae didn’t sit around wondering where that character was – she went out and created her. And the fans responded. At the Q&A after her recent Los Angeles book reading, one woman stood up not to ask a question, but to say, “I love you. I just really love you.”

Rae created a comedy pilot called I Hate LA Dudes with TV powerhouse Rhimes, but, because Hollywood is a fickle mistress, ABC passed on the series in 2013. It was recently announced that HBO is moving forward with Insecure, a comedy pilot Rae co-wrote with The Nightly Show’s Wilmore, and she somehow found time to write her first book between working on her Web series and developing television pilots.

I sat down with Rae at The Last Bookstore to talk about her book, her influences, and why she writes.

BUSTLE: How did the book come about? Was it an idea you had or did someone approach you about it?

ISSA RAE: It was a combination. I knew I wanted to write a book down the line but I thought it was going to be fictional, kind of based off the series. I was approached by a few publishers and Dawn [Davis, VP and Publisher, 37INK] asked, ‘Well what about you? What makes you awkward? What stories do you have to tell?’ I didn’t think I had any stories but she started asking me specific questions and I started to think maybe I could do this. I was reading Mindy [Kaling’s] book at the time and I loved it and thought it would be fun to do something like that. So it just happened at the right time.

What aspects of Mindy’s book influenced you?

Mindy’s book was universally specific, which I really appreciate. I can identify with her so much. And I read Tina Fey’s book and Sarah Silverman’s book, and even Chelsea Handler’s books. They were similar in the way they sort of bare it all about themselves, but the comedy in each was uniquely different.

How was the writing process for you, compared to working on your series and being part of a team of collaborators?

So lonely and sad. If I didn’t have deadlines I can’t imagine that I would have finished this book, ever. At least with filmmaking there’s accountability, and with episodic series people expect a certain consistency. This was such a solo process, just being alone with my thoughts. The only time I really talked to people about it was to get approval from my editor or fact check with friends. It was really intimidating.

There are personal stories in the book, about you but also about your siblings and parents. Did you talk to them about that before you started writing, or after?

Initially, I just did it. A lot of it felt like a diary entry, I was just getting it out there. When I got the final digital copy, I realized people were actually going to read this and I was having anxiety about the content. I really am a private person and my family is private, so I was feeling self-conscious. I sent it to my little sister to read to see if I was saying too much. She read it and said, "You need to let dad read this."

That must have been nerve-wracking.

He didn’t get back to me for three days. Then he just said, "We need to talk." I called him and he said he was proud but he just said, "Keep in mind you’re writing this — your family isn’t writing this. You’re part of this social media generation where you tell, tell, tell. Just think about your last name; it isn’t held by you alone."

Does putting the book out there feel different to putting your series out into the world?

For sure it does. With a Web series, it’s fictional and it’s still part of me but it just feels different. It’s meant to be humorous. With the book, this is stuff that happened to me in real life, and it’s a big deal to me.

Towards the end of the book you write, "Innocence after elementary school is so contrived." Can you talk about that line?

A lot of what I wrote was tongue-in-cheek, but it is about this perception of how people want you to grow up so fast, and I wish I would have held onto my innocence a little bit longer. There’s so much pressure to grow up and be an adult.

Was there one chapter that was most fun to write?

Definitely the chapter about meeting and connecting with other black people. It just speaks to my own experience.

Your HBO show with Larry Wilmore was just announced, so can you talk about that at all?

It’s still in development. There’s still one more step for it to go to series and that’s when I’ll be like, "Yes!" It’s really close to my life but a bit more exaggerated.

You’ve had the support of some amazingly creative people, like Wilmore, Shonda Rhimes, and Pharrell. Have any of them given you advice along the way that helped when you were writing the book?

If I’m being 100 percent honest? Not really. But by helping me and putting a lot of weigh behind what I do, they help me tremendously.

Last question: Why do you write? What’s it all about for you?

In a selfish way it’s about creating what I want to see, and that’s the most exciting part. Especially when I get to see it come to life and see other people bring it to life — that collaborative process is so thrilling to me. There’s something about creating something out of nothing that’s so exhilarating and so fun. I just love it.

If you can’t make any of the stops on Rae's book tour, she's doing a live Web chat about the book on March 10. Check out The Inkwell Book Club for more info.