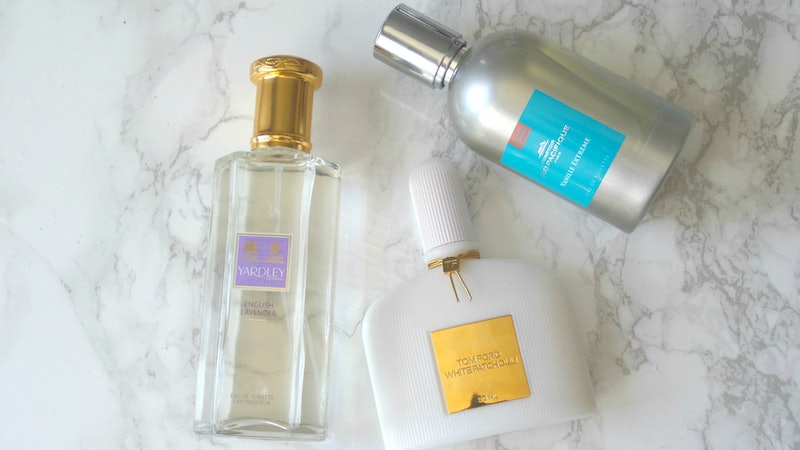 If you're anything like the majority of us, you probably picked your perfume solely because, well, you liked the way it smells. But would you pick a different fragrance if you knew it would change other people's perception of you for the better? A recent Leiden University study showed that the scent of lavender can promote trust. Volunteers in the study played a "trust game," in which they were divided into trustors, who held five euros to either share or keep, and trustees, who could either keep the money themselves or give it back to the trustor. The study discovered that players in a room filled with the fragrance of lavender (as opposed to a peppermint-scented room and a neutral-scented room) were more likely to entrust their partner with money.

It's a compelling idea: Wear the scent of lavender, gain people's trust (and money, hopefully). But does it work in real life? There aren't a lot of easy ways to test this outside of a controlled scientific experiment complete with volunteers. If you ask random people on the street to loan you $5 as part of "a fragrance-based trust experiment," that's just panhandling with a fancy name. If your family and friends are anything like mine, they'll just laugh and walk away because you already owe them $10.

Still, I wanted to test-drive this fragrance theory in real life for a week. With some help from FragranceNet.com, who gamely provided three very different perfumes (and their accompanying essential oils), I tried to see if people's perceptions of me changed based on my scent.

One thing I learned from my experiment is that scent is highly personal, and there's a big difference between judging someone's fragrance consciously and subconsciously. When I wore one perfume as opposed to the other, there wasn't a huge difference in how the same people treated me. If I sprayed too much of the Tom Ford, my mother could be counted on to complain of a headache, but otherwise nobody seemed to notice if I smelled like vanilla or patchouli. And nobody was more willing to loan me money when I was wearing lavender.

However, ask people to consciously judge you based on your perfume and their declarations will be swift and sure. I know because I tried it.

When wearing Tom Ford White Patchouli, random people described me (with eyes closed and based solely on my scent) as:

When wearing patchouli essential oil, I got:

One person said I smelled like her dad, but who knows if that's a negative or positive association.

When wearing Comptoir Sud Pacifique Vanille Extreme, people described me based on my scent as:

With vanilla essential oil, I heard:

I also got "baker" a lot with both vanilla scents, understandably.

Wasn't that a fun game? I hope nobody was offended if they wear those specific scents. I wouldn't recommend trying this at home with your favorite perfume, lest opinionated strangers ruin it for you forever.

If you always get positive feedback on your perfume (you lucky duck) and want an even stronger effect, you could skip the perfume and go straight to the source: essential oils. Below are the ones I tried in my experiment:

FragranceNet provided Patchouli Oil from Now Essential Oils, Vanilla Aroma Roll On from Terra Essential Oils, and Lavender Essential Oil from Aura Cacia. Each one packs a punch of pure, undiluted fragrance. They're easy to dab onto your wrist and other pulse points, and small enough to keep handy in your purse.

You could also layer them under a complimenting perfume for extra potency, such as combining the vanilla essential oil with the Vanille Extreme perfume for the ultimate bakery scent.

Personally, I might layer Yardley English Lavender perfume over lavender essential oil the next time I have a meeting with my boss to talk about a promotion. Even if it just makes me feel confident, it helps. Unless my boss thinks lavender smells promiscuous for some reason. Scent truly is very subjective.

Finally, if you're still convinced by the lavender study but the idea of wearing lavender fragrance every day doesn't appeal to you, get creative. Stick a couple of lavender-diffusing reeds in your office, or put some lavender soap in the work bathroom. (I really like Mrs. Meyer's Clean Day Lavender Soap and Dr. Bronner's Shikakai Lavender Soap.)

There's nothing more relaxing than washing your hands with lavender soap. It will definitely create a calmer (and cleaner) workplace and, with any luck, inspire a sense of confidence and trust in the office.

Other than that, my only advice is to wear whatever fragrance you like most days, and only wear the perfume that your mom, boss, or boyfriend loves on the days that you really need to trick them into doing something for you. Science! Or something.

More like this
All The Products Hailey Bieber Used For Her Birthday Makeup Look
By Olivia Rose Ferreiro
10 Makeup, Hair, & Skin Care Gifts That Beauty Lovers Will Drool Over
By Erin Stovall
Kim Kardashian On The Beauty Hack That “Changed My Life, My Skin, My Confidence”
By Taylor Jean Stephan
Why TikTok's 15-Minute Cleansing Challenge Isn't All It's Cracked Up To Be
By Rebecca Fearn
Get Even More From Bustle — Sign Up For The Newsletter