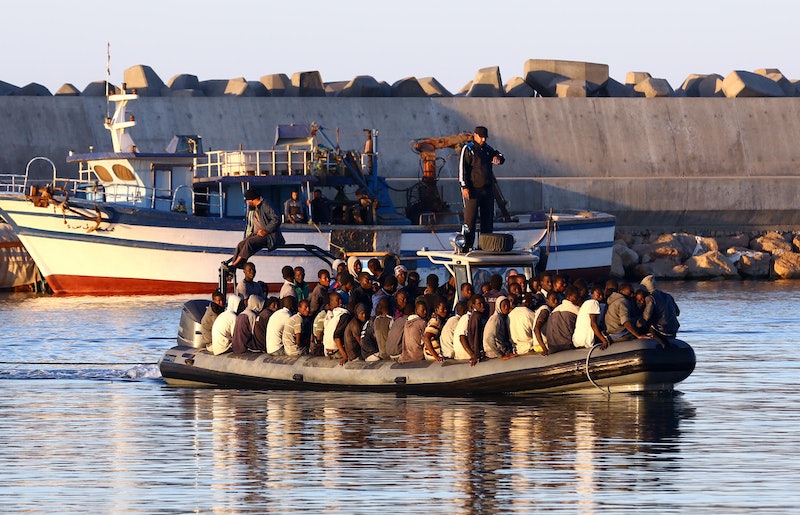 Upwards of some 300 refugees and migrants are believed to have died this week when trying to cross the frigid Mediterranean Sea from North Africa to Italy on four rubber dinghies, according to the United Nations High Commissioner for Refugees. According to survivors, each boat set out from Libya with more than a hundred on board. The refugees floated for days without food or water, and the boats began leaking cold seawater almost immediately. The Italian coast guard rescued approximately 107 migrants making the trip. Only two of 107 passengers made it from one dinghy; on another boat, seven survived out of the 109 who initially boarded in Libya. Another boat has yet to be found.

"This is a tragedy on an enormous scale and a stark reminder that more lives could be lost if those seeking safety are left at the mercy of the sea," UNHCR Europe Director Vincent Cochetel said in a statement. “Saving lives should be our top priority. Europe cannot afford to do too little too late.”

Struggling with war, oppression and lack of opportunity at home, hundreds of thousands of people from North Africa, sub-Saharan Africa and the Middle East risk the perilous trek across the Mediterranean Sea each year in hopes of making it to Southern Europe and the promise of a better life. About a quarter of the migrants who attempted the journey last year were fleeing the Syrian civil war. Without much recourse to legal immigration channels, many people instead turn to smugglers in North Africa, who charge exorbitant amounts and then turn the boats loose on the sea without much interest in whether or not their charges live or die.

In 2014, more than 200,000 were rescued trying to cross the Mediterranean; 3,500 died in the attempt, according to the UNHCR. And the statistics for January 2015 show that pace of migration is only quickening.

The tragedy comes months after the UN refugee group and other human rights organizations warned that many would die if the European Union did not dedicate more resources and men to searching for migrants struggling off the coast of Libya and North Africa, crammed onto ill-equipped boats like sardines.

William Lacy Swing, director general of the International Organization for Migration, warned in a statement that a greater commitment to rescue would be needed to stave off incidents like this one.

What's happening now is worse than a tragedy — it is a crime — one as bad as any I have seen in 50 years of service. These smuggling networks act with virtual impunity and hundreds are dying. The world must act.

For a while, it appeared that Italy had stepped up to deal with the humanitarian emergency. Following another catastrophic run of 360 migrant deaths in 2013 on the Mediterranean, Italy introduced a new Mare Nostrum program that stepped up its search and rescue efforts in the Mediterranean. Italian naval ships conducted frequent sweeps near the Libyan coast to watch out for and rescue migrants before their dinghies could sink or wreck.

But after some European leaders worried that the program’s protections were inviting more refugees and economic migrants to make the dangerous journey, the program was discontinued. Instead, the EU took over and put in place a scaled-back patrol system that keeps boats closer to the Italian coast. Operation Triton, as it is called, aims more to control the region’s borders than to rescue struggling boats.

Giusi Nicolini, the mayor of Lampedusa, a small island off the Italian coast, had harsh words for the elimination of the Mare Nostrum program. After the Italian coast guard stumbled upon one of the dinghies this week, they attempted to transport all of the migrants back to Lampedusa, but on the smaller boats, not all of the rescued could fit below deck. Instead, many had to remain up in the elements for up to 18 hours in frigid temperatures as the coast guard boats made their way back to Italy. At least 29 migrants died of hypothermia on the journey back.

"Mare Nostrum was an emergency solution to a humanitarian crisis, so closing it was a huge and intolerable step backward,” Nicolini said. “To organized crime it’s not important if people make it across the sea alive or dead. But now, without Mare Nostrum, it’s as if no one, and not just the criminals, cares if they live or die.”

Likewise, the UNHCR reiterated “its concern about the lack of a strong search and rescue operation in the Mediterranean” in a statement. The agency expressed concern that the Operation Triton did not have the requisite resources and tools for handling crises of this scale.

After all, getting rid of robust search-and-rescue outfits does not deter refugees and migrants from making the journey. People boarding these dinghies are aware of the high risks, but continue to do it anyways because they feel they have no other livable option available to them. As Leonard Doyle, a spokesman for the International Organization for Migration, told The Guardian:

If we believed that families drowning in the Mediterranean would be a deterrent to other migrants, well it’s not. People are leaving because they’re being pushed out.

These 300 presumed deaths are a tragedy. While we cannot know whether or not continuing the Mare Nostrum program would have prevented these deaths, it is clear that the European Union needs to commit more of its resources to looking out for refugees stranded just beyond its borders. Otherwise, the death toll will only continue to climb.