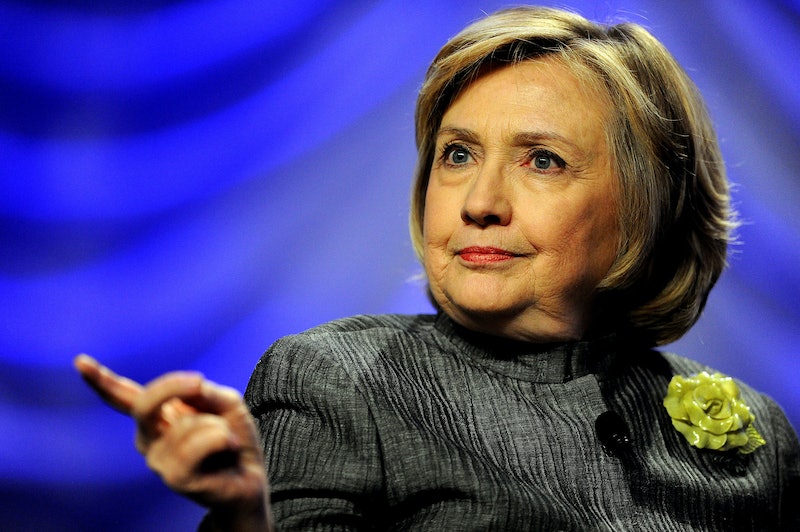 It's getting a little tiring, this waiting game. You know the one I mean. The one where we all sit around and wait for Hillary Clinton to tell us what we all already basically know — that she'll run for president in 2016, boasting a seemingly dominant, frontrunner position. And with no anticipated challengers who seem like genuine, heavyweight threats (sorry, Martin O'Malley, you're no Senator Obama), Hillary fans have cause to be happy. But anybody can get irked sometimes — there are three things to never tell a Hillary Clinton diehard, because believe me, you won't fare well.

It's understandable in a way, given the massively historical importance of Hillary's assumed campaign to come — we've never had a female president before, let alone a presidential nominee. Nor have we ever had a primary field that seemed quite so stacked in a woman's favor. But despite all this, there's a range of inane, irritating criticisms that get leveled at her, either for things she can't help, things that don't really matter, or things that a man in her position would never have to deal with. Here are some of the big ones, and again, don't be the person spouting this stuff.

I Don't Want To Vote For A Presidential Dynasty

As it turns out, Hillary's got a rather famous husband, a guy by the name of Bill. He was elected President in 1992, and served two terms, eventually giving way to the George W. Bush presidency in 2001. And that's led to a predictable refrain from some anti-Hillary observers — should we really be kicking the Presidency around just one family?

It's a feeling I admit being sympathetic to. Our electoral system, after all, theoretically allows us to elect anyone, and in the sheerest statistical sense it's staggeringly unlikely that both Bill and Hillary Clinton would just happen to be ideal Americans presidential fodder. But elections aren't theoretical — they're altogether real, contextual and practical. The fact is, if Hillary is nominated to represent the Democratic brand, becoming the guardian of all the foundational, crucial policies and values the party stands for, well, it's a no-brainer.

Also, this is an absurdly bad-faith argument from any Republican who supported any Bush candidacy after 1992 — are they seriously going to nominate a third one this time? Chew on this strange fact for a second: the Republican Party has failed to elect a non-Bush to the White House in 27 years.

But Isn't She Too Old To Be President?

This. Is. The. Worst. It's probably the nakedest, most transparent double-standard Clinton's would-be candidacy has faced so far, and the one in which implicit, thoughtless sexism is most evident. Let's think for a moment — what male prospective candidates have earned the title "too old to be president?"

I can think of precisely one, huge example: California Governor Jerry Brown. A runaway success story among a broadly weak field of Democratic state executives, Brown would be a presidential heavyweight were he just a decade younger — he's currently 76, and would be 78 on election day.

Clinton, to be clear, will be 69 on election day. Here's a handful of other notable people who would be/were considered "too old to run" by this standard.

Yup, it's about sexism.

This is both the most reasonable thing you can say to rankle a Hillary supporter, and probably the most haunting for them. What if she loses to a Republican challenger? Worse yet, what if she isn't even nominated? Lest we forget, we've been here before — in the run-up to 2008, she seemed like a dominant odds-on favorite to take the whole thing, with a frayed, beleaguered post-Bush Republican Party and a primary field of relative unknowns. But then came a certain sharp, smooth Senator from Illinois to steal away the thunder, postponing her ambitions for a whopping eight years.

And while there's not a single Democratic politician likely to run (or, really, in the party writ large) that can stir the levels of inspiration and zealous support that then-Senator Obama did, rest assured, it could happen again. Two years or so is an awfully long time, after all, and if some top-flight prospective candidates jumped into the fray — Elizabeth Warren, perhaps, in spite of all the denials? — there's no telling how things could turn out. And, of course, maybe the most stinging possibility — what if she lost to Jeb Bush ? My god, what a nightmare.