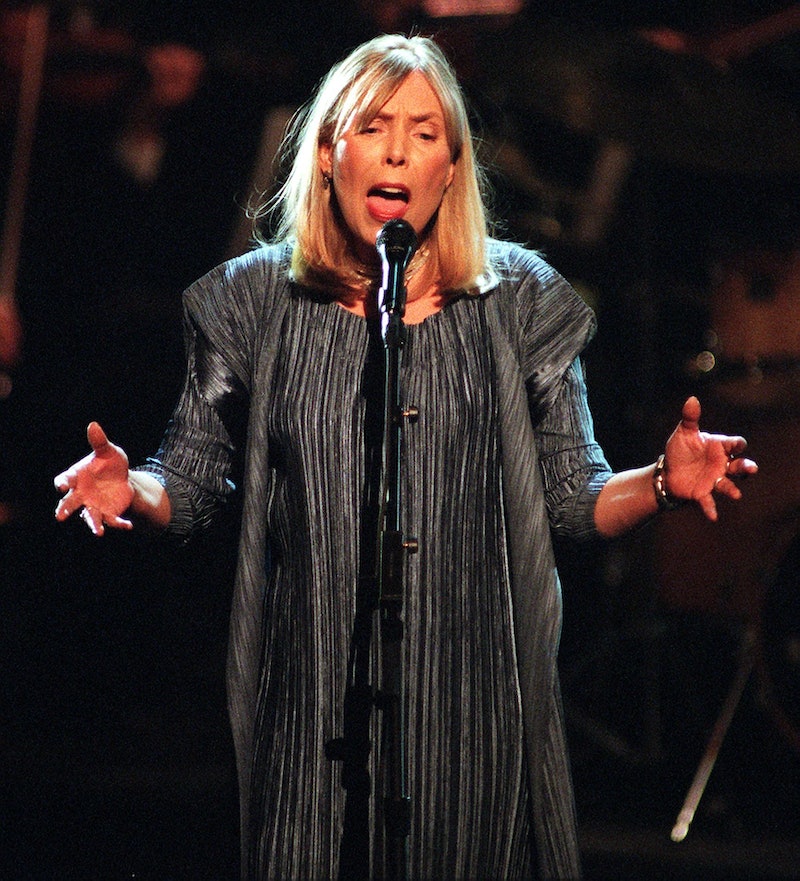 Joni Mitchell is many things, and as is the case with all of us, some of them are good and some of them are not so good. Although I'm hesitant to slap yet another label on her, though, recent statements she made are difficult to ignore: Joni Mitchell somehow believes that she has experienced what it's like to be black. Those are actually the words that came out of her mouth: “I have experienced being a black guy on several occasions.” I am not kidding, although I really, really wish I were.

Carl Swanson recently profiled Mitchell for New York Magazine's The Cut. Much was made about how beautiful the accompanying photographs are (and to be fair, they are gorgeous), and the profile itself is really quite interesting… but I'm having a really huge problem trying to process part of it, and it's the section wherein Mitchell discusses race. It's a doozy, and no matter which way you look at it, it's troubling.

Swanson's name was actually the catalyst for this portion of the conversation. Mitchell apparently asked him whether it was Scandinavian, which in turn led to a discussion of her own ethnic background (“I'm a little schiz-y,” she said; her father was Norwegian, her mother was Irish, French, and Scottish, and she thinks her ancestors were Sami). Ultimately she arrived at the following point: “I wish I had every blood. Then I could tell everybody off and not be a bigot.”

And that's where it starts to get weird. Immediately following that last comment is this:

“She mentions that she feels she has a shared identification with black men. 'When I see black men sitting, I have a tendency to go — like I nod like I'm a brother. I really feel an affinity because I have experienced being a black guy on several occasions.'”

Swanson asked her to elaborate, on that bombshell of a statement. She begins by bringing up the cover for her 1977 album Don Juan's Reckless Daughter:

Yes, that's Mitchell center — but the figure on the left? That's also Mitchell. The "character" she's dressed up as there is referred to as her alter ego, Art Nouveau... but yeah. It's still blackface, and that's still not OK.

What follows is a long and somewhat rambling explanation of how that album cover came to be. It began when her dentist said to her one day while capping her teeth, “Oh, you've got the worst bite I've ever seen. You have teeth like a Negro male.” Following this piece of casual racism, she had the experience of running into a Black man on Hollywood Boulevard at a time when she was trying to decide what to dress up as for a Halloween party. Mitchell noticed he had a unique gait; then he spoke to her: “And he says, 'Mmm, mmm, mm, you looking good, sister, you looking good,” Mitchell said. “My mother always told me to stick up my nose, but I couldn’t help it, I broke out into a big grin. And he kept going and I was trying to imitate his walk. I said, ‘I’m going to go as him.’” Then, after the splash she and her costume made at the party, she decided to pull it out again during the album cover shoot—purely because she didn't like the guy who was shooting the photos. “It was a great revenge,” she said. “That was all to get his ass. To freak him out. I had to keep him on the defensive.”

Now, it's probably worth noting that Mitchell has suffered in recent years from an illness with as yet undetermined and possibly psychological causes; it's also possible that there's a greater context here that either didn't make it into the article or that Mitchell failed to communicate while recounting the story in the first place. But even allowing for those possibilities… what?! Just… what?!

I'm trying to be extremely careful about how I talk about this, given that I myself am not Black. From where I'm sitting, though, Mitchell's whole story looks like one of the most tone deaf instances of cultural appropriation I've ever seen. Not only is she so cavalier about having dressed up in blackface as a Halloween costume (which continues to be not at all OK, no matter who is doing it or when), but moreover… how, exactly can a blonde, white woman believe she knows what it's like to be a Black man? I mean, I'm part Asian (and not an insignificant part, either) — but I don't look it. Because I look so Anglo — light skin, medium brown hair, green eyes — that's what my experience has been. I wouldn't even be able to begin discussing racism and the Asian American experience, because people have always treated me as white — with all of the privilege that goes along with it. Given, then, that Mitchell has a primarily white, European background, I find it incredibly difficult to understand how she could think she has “experienced being a black guy.”

This isn't to say that people of all types can't be affected by prejudice; one group's experience doesn't negate another's, even when they're vastly different from each other. But what we can't go doing is equating one experience with another. The Black experience in America is so specific, and with such a specific history behind it, that, although we can and should all be sympathetic to it and want to work to eradicate racism, anyone who has not experienced it themselves can never, ever say that they have. Period.

Why am I pointing this out? Because we all need to be aware enough of casual racism to stop this sort of thing from happening. This awareness is something that must be developed, and one of the best ways to do that is by looking at instances in which we failed to employ it. We will make mistakes, but what we do with those mistakes is what matters. We have to own up to them and to learn from them. We have to strive to be better than we are. There is no other option.