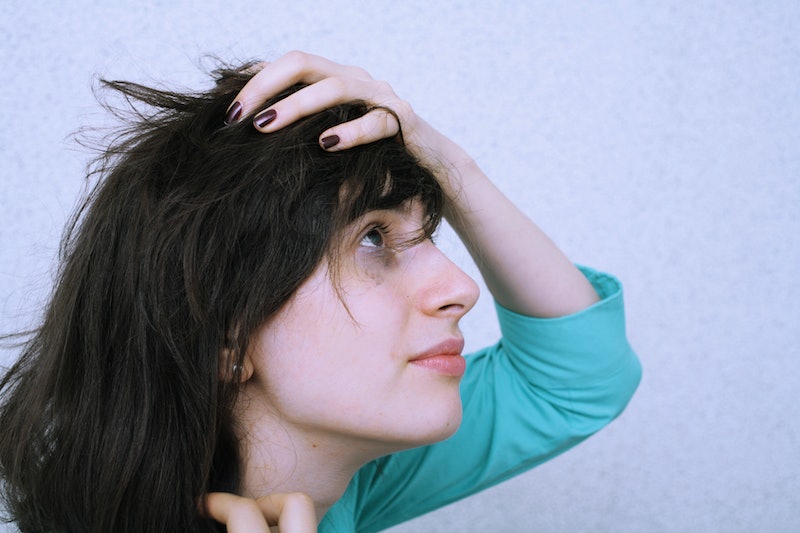 Nobody wants to be That Friend; you know, the one who's always annoyed about something and never stops talking about it. Research has indicated that complaining may actually make you feel worse about what's bothering you — but on the flip side, a recent study also found that complaining selectively can actually make you happier, as long as you're doing it to the right audience. Can we just take this moment to thank the Journal of Social Psychology for their gift to mankind? Anyone that validates the existence of Whiny Wednesday Brunch among my friends gets an A+ in my books.This study is actually the same one that found that people with fewer pet peeves are happier, which isn't a coincidence, Cosmopolitan reports. Researchers asked 410 students to make a list of their complaints about a current relationship or an ex, which was followed by a survey about "happiness, depression, mindfulness, relationship satisfaction, and life satisfaction." Lastly, they were asked to pick out their top three problems and explain them. Unsurprisingly, the researchers found that the people who listed the fewest complaints were happier, more mindful, and more satisfied with their relationships. However, it's not that these people go through life without ever complaining. The secret is that because they're so mindful, they're "more aware of their complaining and more likely to complain strategically — in moderation and to the proper audience," according to co-author Robin Kowalski.

<img alt="fashion animated GIF " src="http://media.giphy.com/media/8y0AxvvpMP8KQ/giphy.gif" class="article-body-image" title="Image: http://media.giphy.com/media/8y0AxvvpMP8KQ/giphy.gif"/>So no, you probably shouldn't be forcing the poor barista to listen to how the grocery was out of your favorite flavor of coconut water, no matter how sympathetic they seem (hint: their sympathy is directly proportional to your tip). You're also gonna want to quash the urge to go on about your terrible ex-boyfriend to your co-worker for the umpteenth time, because heaven knows it can make your life hell if you screw that relationship up. Also, according to a 2012 study, negativity at work reduces productivity even if you're not the one complaining. Plus, it's just no fun to be around. You don't have to restrict yourself to happy avenues of conversation for the rest of your life, though. Discussing negative experiences has been scientifically shown to be cathartic, and sometimes complaining can get things done. Think of it this way: if you're annoyed that your roommate keeps leaving their clothes in the dryer, nothing is going to change unless you speak up. However, if you're constantly going on about the negative things in your life, people are eventually going to stop paying attention to you. As long as you're aware of how much you're complaining and who you're doing it in front of, you can still be a Debbie Downer sometimes. Just don't get too carried away.

More like this
This Psychological Effect Might Be Keeping You From Hitting Your Goals
By Lexi Inks
The Spiritual Meaning Of Angel Number 000, Explained
By Kristine Fellizar
10 Ways To Be More Empathetic To Your Partner
By Raven Ishak and Lexi Inks
Think Your Partner Is Cheating? These Tarot Cards May Confirm Your Suspicions
By Kristine Fellizar
Get Even More From Bustle — Sign Up For The Newsletter