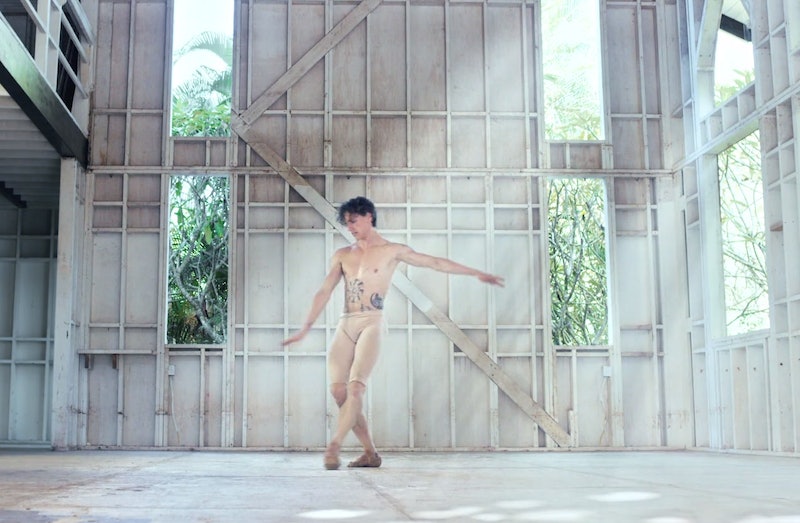 Since the release of Sia's acclaimed "Chandelier" and "Elastic Heart" music videos with modern dancer Maddie Ziegler, dance has been thrust into the world of pop, and the results have been both fascinating and controversial. Regardless of public outcries and misconceptions, the point of these videos is to evoke the most primal emotions of the song, which Sia accomplished. This past year, Irish singer Hozier's single, "Take Me To Church," earned him much acclaim, and its personal lyrics evoke similar feelings from listeners. Recently, luminary director David LaChapelle teamed up with dancer Sergei Polunin to film a beautiful and refreshing interpretation of the hit song. So, who is this incredible dancer Sergei Polunin?

Polunin shines in the LaChapelle-directed video which is filmed within what appeared to be the empty frame of a church, lined with high, arched windows and drenched in natural sunlight. The simplicity of the clip is its driving force. The camera follows only the dancer who uses his entire body to encompass the space, and the artistry in his movement captures the sentiment of the song.

When I stumbled across the clip, I wondered if this was a second official video for the song, being that Hozier had already released a previous one, But it seems as if LaChapelle was just as inspired by the song as many of us are, and Hozier took to his Twitter to share his admiration.

Now, back to Polunin. I'm sure I'm not the only one who admired his dance skills and wanted to know more. Turns out, although he is only 25 years old, Polunin has been a very prominent name and force in the world of contemporary ballet. The Ukraine-born dancer left his home at the age of 13 to dance at London's Royal Ballet School on a scholarship from the Rudolf Nureyev Foundation, created by the legendary Russian dancer. It was not long before his talent began shining even brighter, and his work led him to become to youngest ever principal dancer at the school at the age of 19.

Known as the "bad boy of Ballet," Polunin abruptly announced his exit from the Royal Ballet in 2012 and instead became principal dancer at Moscow’s Stanislavsky Music Theatre. His sudden exit caused waves in the world of dance, and his joking nature and apparent distaste for rehearsing has further inked his reputation as being difficult to work with. Although he does have some blemishes on his record, Polunin is still highly regarded for his technical skill and considered one of the best dancers today.

Aside from dancing, Polunin is a fan of tattoos — which you can see plenty of in this video — and was part owner of The Tattoo Kartel in London. Last year he also starred in a series of ads for Marc Jacobs' fall collection amidst rumors that Polunin was keen on quitting ballet to go to Hollywood. I don't know about you, but he was pretty captivating onscreen so maybe we'll get to see Polunin on the big screen soon. We can only dream.