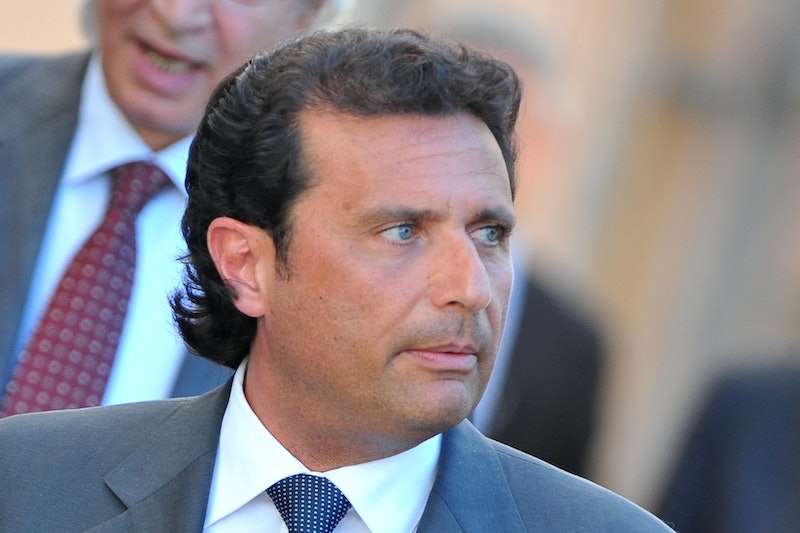 It's been two long years, but there's finally been a conviction in the Costa Concordia case. You may remember Costa Concordia — a high-profile cruise ship crash in January 2012, which left 32 people dead. And in its immediate aftermath, international media and social media alike fixed their attentions on the ship's captain. The 54-year-old was criminally charged both with causing the crash and abandoning his sinking ship with crew and passengers still left aboard, and now his fate is sealed: former Costa Concordia captain Francesco Schettini was convicted of manslaughter Wednesday, bring his trial to an end with a sentence of 16 years in prison.

His trial flew a bit under the radar, in the American media at the very least, so it's not surprising if you're not familiar with the details. Schettino was accused of having directed the Costa Concordia too close to the shores just off Tuscany's island of Giglio, which caused the liner to run aground in shallow waters. He was further accused of having failed to deliver an evacuation order for an entire hour after the crash first happened, and as The Guardian details, that part proved pivotal. He was convicted for multiple counts of manslaughter as a result of that tardy order — on the prosecution's argument that everyone on the ship could've been saved given the extra time that was lost.

For his part, Schettino has been painting a very different tale. Or, at the very least, has suggested he's bearing an inordinate amount of the blame. He had a number of excuses he attempted to raise to justify those last actions of his command — he insisted at one point that he didn't actually abandon the ship, but accidentally fell directly into a lifeboat, for example.

That particular, peculiar claim came back to bite him pretty badly later on, when a cadet aboard the crashed liner rebuked it in court, describing Schettino jumping into the lifeboat when his full duties as Captain were still undone. That one felt pretty easy to see coming — the "I tripped and fell directly into a lifeboat" excuse being a lie is, let's say, not the most shocking revelation.

I have spent the last three years in a media meat grinder. It is difficult to call what I have been living through a life. All the responsibility has been loaded on to me with no respect for the truth or for the memory of the victims.

It's worth noting that the 16-year sentence isn't quite the end of Schettino's legal saga. According to Reuters, in fact, quite the contrary, as the appeals process in Italian courts can take years. And, as it's a virtual certainty that Schettino is going to continue to fight this, that means he may not have to start sleeping in a cell just yet. Also, though it may be cold comfort for him at the moment, his defense team did net him a lesser sentence than what the prosecution was gunning for — they wanted 26 years.