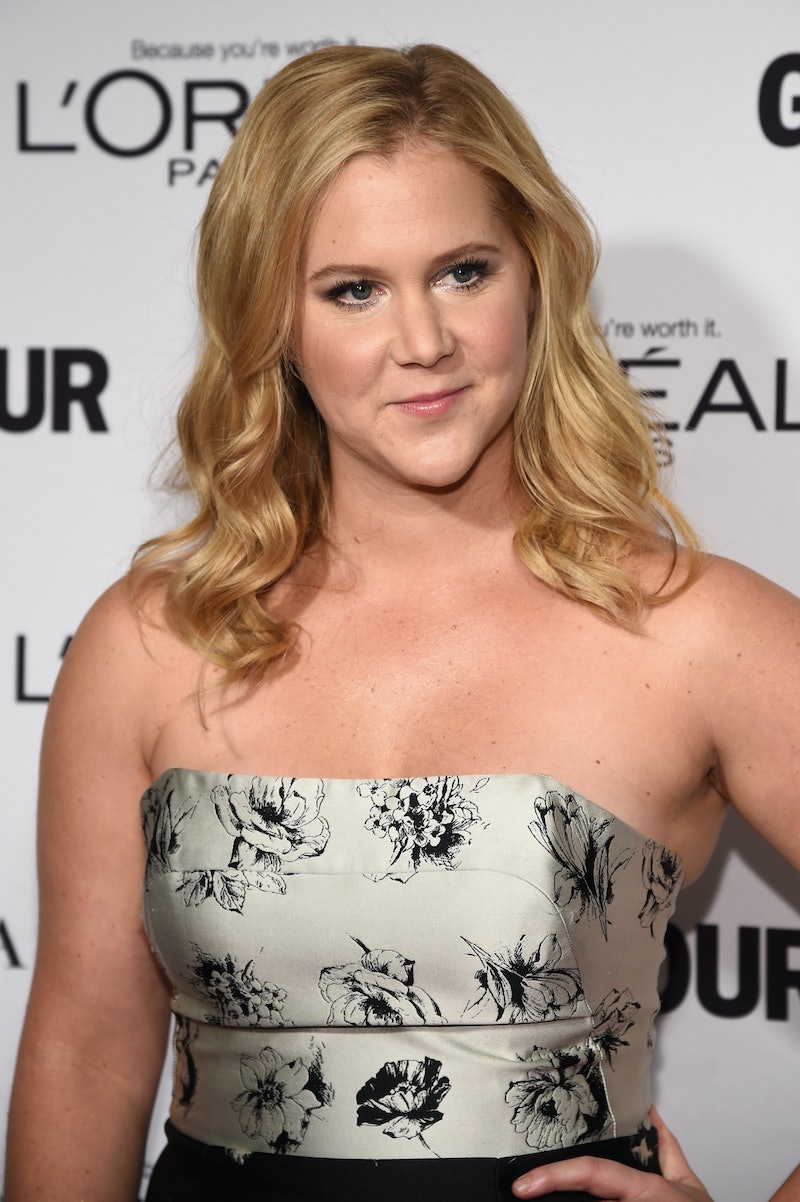 I'm not going to pretend to be above romantic comedies. Give me a box of Snow Caps and a Kate Hudson/Matthew McConaughey vehicle to watch and I will happily suspend my disbelief for an hour and a half as two ridiculously hot people fall in love despite some sort of minimal, overblown conflict standing in the way of their happiness. But, while I'm far from a rom-com hater, I have to say that I found the trailer to Judd Apatow's new Amy Schumer-led comedy Trainwreck completely refreshing — and not only because it stars one of my very favorite comedians, Schumer. Rom-com Trainwreck is here to slay some of the tired tropes common within the genre, and it's about time.

In Trainwreck , Amy (played by Schumer) is a woman who doesn't believe monogamy is "realistic," something that her father ingrained in her head after he divorced her mother. 23 years later, Amy is unapologetically bouncing from hot guy's bed to hotter guy's bed, and has zero interest in dating (unless you count "drunken one-night-stands" dating). But, while Amy may love to party, she's also a fleshed-out character who has a lot of her stuff together. She has a killer job, great friends, and a beautiful, completely-unrealistic-to-rent-on-a-magazine-writer's-salary apartment. Is she a "trainwreck," as the title suggests? Maybe — or maybe she's her own person who doesn't really care if anyone else thinks getting trashed on a Tuesday is a terrible thing.

In other romantic comedies, Amy would be the hot mess best friend of the together, true-love-aspiring lead — a foil who encourages her friend to go out in her lowest-cut shirt and throw back tequila shots. Instead, here, she's the heroine — a heroine flabbergasted by a sports doctor (Bill Hader) who calls her after they sleep together, because that's just not how things are in her world. Nor is it necessarily how she wants this to be — she's not looking for a guy to save her from her cycle of no-commitment as much as she's shocked that she'd even consider "settling down," which, to her, means spending the night post-sex.

Romantic comedies aren't all cookie-cutter, but there are common threads. In most romantic comedies, it's the women who seek commitment and the men who are on the fence. Consider the male-driven That Awkward Moment — the central conflict of the story is that the guys want to avoid settling down with a woman for as long as possible. Then look at a film like the female-led The Ugly Truth — a woman wants to do all she can to appeal to a longterm partner, so much so that she'll take advice from a notorious womanizer.

Relationship roles in films are typically gendered — men want freedom and women want commitment. There's not much room in movies for people who don't fall into one of those boxes, which is why a film like Trainwreck is important — it shows that not all women or men have the same wants, desires, and views on relationships.

Whether Trainwreck will live up to the hype is yet to be seen, but I'm optimistic that this will break the mold of typical rom-coms while still telling the story of a budding relationship. It's Schumer, it's Apatow, and I'm invested.