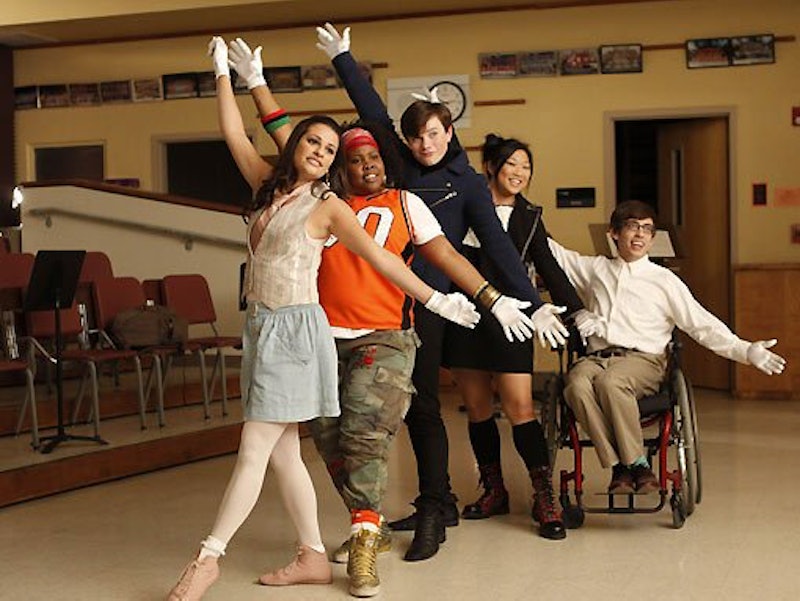 I’ve been told before that I have a hard time letting things go: So, if you see something in the news in the next few days about a girl chaining herself to the Glee set, I'm not saying it's certain, but it’s possible that it’s me. Here’s the thing: The end is near, fellow obsessive, slightly off-kilter Gleeks. Nearly the entire Glee cast has recorded their last (or almost last) songs for the show, they’ve received the final script, and they’ve even begun to film the last episode. And, as expected when the fictional world you’ve become emotionally invested in comes to a screeching halt, I’m slightly devastated. So, my aim is to have you all in as deep of a depression as I am about the whole thing because well, misery loves company. And, I’m selfish like that.

Just kidding, I wouldn’t do that to you guys. But, in the spirit of the cast being equally (or more) despondent and nostalgic than I am, taking to social media to make sure we know that EVERYTHING is the last time, like a bunch of really attractive and talented doomsday preppers, I can’t help but think back to the beginning. So, because we’re all a little mushy and wistful about Glee’s end, let’s look back at the cast’s first performances in contrast to all of their “last” posts.

Because the other thing we share with the cast other than an affinity for musical theater, is masochism.

Excuse me, I JUST HAVE A LOT OF FEELINGS RIGHT NOW.

But now who will be there every week to deliver a power house ballad?

Re: Other things Chris can do after that heart wrenching Instagram post: Pour salt in our wounds, twist the knife deeper into our hearts, kick us when we're down.

The one constant we have to hold onto: That boy has a fantastic head of hair.

Like... is that a good thing? Is it a bad thing? Do you hate it? Have you cried tears and wiped them up with said script?! Let us in, man!