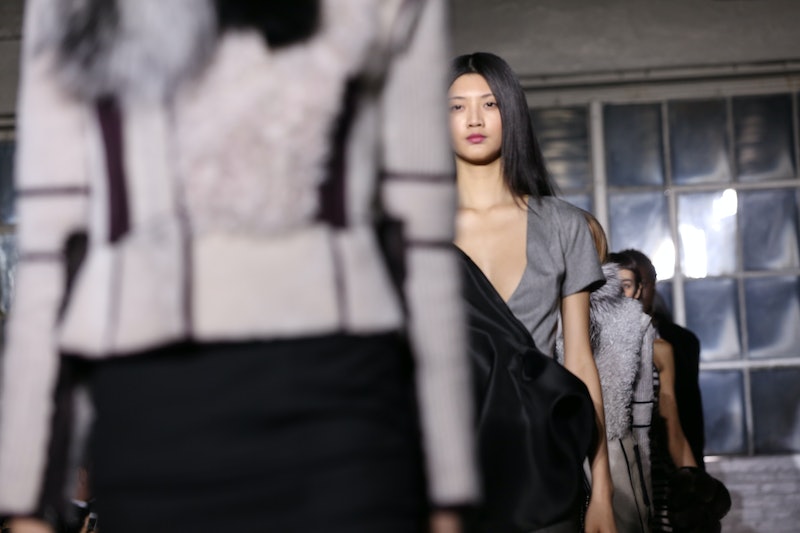 Back in 2010, for the first time ever, the CFDA (Council of Fashion Designers of America), gave its three most prestigious awards to three Asian designers: Richard Chai for menswear, Jason Wu for womenswear, and Alexander Wang for accessories. Since then, Asian and Asian-American designers have been on the ascent, especially as the Asian market for luxury goods has expanded with the region's relatively newfound wealth.

There are several Asian designers who have become close to household names like Wang, who collaborated with H&M this past fall; Vera Wang, unrelated to Alexander; and Anna Sui. But what was surprising to me as I ran through the list of designers presenting at this NYFW was not only the number of Asian designers, but also the fact that I hadn't heard of most of them. This was embarrassing for me since I consider myself a pretty informed consumer of fashion news. (I do write about it, after all.) Even more embarrassing was that many of the designers weren't emerging at all, but veterans of the industry, often leaders and innovators in their home countries, with decade-long careers.

There's always debate about the diversity at NYFW, and that is an important, ongoing conversation. But as Asian models, and all models of color, continue to struggle to find a voice and fair representation on the runway, it is exciting to know that emerging Asian designers are being heard and established, continuing to have influence. So here are nine designers to know when you're watching this NYFW.

Lie Sang-bong's eponymous line of clothing was founded in 1985, and the Korean designer created his first ready-to-wear collection in 1993. Despite his renown in his native South Korea (he is the president of the Council of Fashion Designers of Korea, the Korean equivalent of the CFDA, of which Diane Von Furstenberg is president) and his 12 years of experience showing at Paris Fashion Week, this will only be the third time Lie has shown at NYFW. Lie's designs are minimalist yet geometric, and draw on a wide swath of references, from Korean poetry to Bauhaus architecture. But his stated inspiration for this season is poise.

Ran Fan, a Chinese designer, is making her NYFW debut this season. After attending the Academy of Arts & Design, Tsinghua University, she moved to London to attend Central Saint Martins, and was awarded first place for her graduate collection in 2009. That year, she created her line RanFan. Fan's collections have made use of clean lines and pastels mixed with bright reds, with modern art as a crucial recurring inspiration, and there's plenty of excitement about what collection Fan will bring to Lincoln Center.

OUDIFU was created by Zhuliang Li in 2006. The Shanghai-based luxury ready-to-wear women's brand has over 200 stores in China, and first showed at NYFW last fall. Li is inspired by the ancient Chinese theory of the 2300 year core, which believes that the rules of nature dictate the human condition. This has been reflected in his designs, like the repeating elephant print featured in last season's collection, and the brand's Instagram has hinted that nature will once again, "be the main focus of the show."

Vivienne Hu grew up in China, studied finance at the University of Hohenheim in Germany, moved to New York City to be an investment banker, quit her day job to pursue a more creative path, so went to Parsons New School for Design to study a fashion design. This eclectic, international experience is reflected in her designs, which are clearly designed for an independent, cosmopolitan woman. Although based in New York, this is only Hu's second time showing at NYFW.

Tadashi Shoji started his career as a fine artist in Japan, working for the contemporary artist Jiro Takamatsu who helped to create the modern art movement in the 1960s. Shoji moved to Los Angeles in the 1970s, launched his career in fashion design, and has been working ever since. Not only is his clothing available in major department stores like Neiman Marcus and Bloomingdales, Shoji has also dressed many celebrities for award shows in perfectly draped and executed dresses, including Gabourey Sidibe, Monique, and Christina Hendricks. His philosophy is that every woman deserves to feel comfortable and confident in her clothes, and that love of the woman's body, no matter what shape or size, is evident in his designs. This collection for NYFW will celebrate the "beauty of flight," according to the designer's Instagram, and from what sketches he's shared, it's sure to be full-feathered and glamorous.

Son Jung Wan is one of South Korea's most commercially successful designers, with her clothing available at hundreds of department stores throughout Korea and now in boutiques scattered across the United States. Despite creating her eponymous brand in 1989, she first presented at NYFW in 2011. Son's goal is to capture the "dual beauty of women" through her designs, sometimes hyper-feminine and other times sexy. It'll be exciting to see how this duality is played out with season's inspiration of 1960s fashion.

Born and raised in New Jersey, Brandon Sun is Chinese-American. His pedigree is impeccable for an American designer, including being named "Designer Of The Year" upon graduating from Parsons in 2006. Sun worked as a furrier for J. Mendel and Oscar De La Renta before starting his own brand in 2011. "Collage, texture, insouciance" have been cited as his primary visual inspirations this season, and based on his Instagram, it looks like leather and embroidery will play a big role in achieving that nonchalant look.

Zang Toi moved to New York City from his native Malaysia when he was 20 to attend Parsons. He opened his atelier House of Toi in 1989, and was featured in Vogue the next year, championed by Anna Wintour. And with that, a career was launched, with a legion of devoted fans. With last season's theme of the American Dream, Toi moved away from his traditionally Asian-style designs, but that's not necessarily a bad thing. His stated inspiration for this season's collection is Venice, and it's sure to be as elegant as anything else he's created.

Here are three Korean designers in one show! Concept Korea is sponsored by the South Korean Ministry of Culture to promote South Korean fashion in the United States. This season will be the eleventh time this showcase has been presented at NYFW, and this season, the three featured designers are Resurrection by Juyoung Lee, LEYII, and Beyond Closet, designed by Taeyong Ko.

More like this
Most Comfortable Underwear For Big Butts
By Audrey Williams
42 Black Owned Fashion & Beauty Brands To Support Today & Always
By Mekita Rivas, Shea Simmons, Kui Mwai and Dominique Norman
11 Graduation Guest Outfit Ideas To Wear To Someone Else’s Ceremony
By Phoebe Avison and Claire Fox
Myra Magdalen Is TikTok’s Queen Of Chaotic Maximalist Fashion
By Sophia Moore
Get Even More From Bustle — Sign Up For The Newsletter