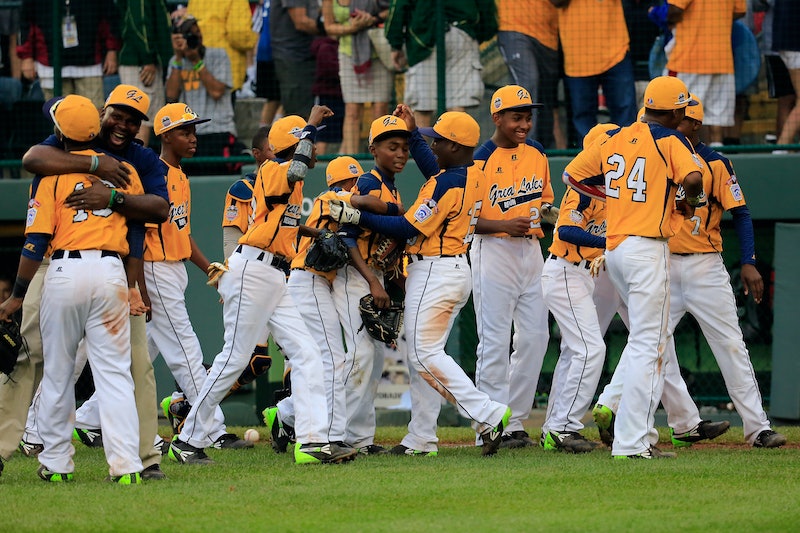 If there was ever a year to pay attention to the Little League World Series, it was 2014. There was, of course, Mo'Ne Davis, the fastball-throwing queen who became the first girl to throw a shutout in the history of the tournament, creating a whole new meaning of the phrase "throw like a girl" way before the Always Super Bowl commercial. And after Davis' Philadelphia team, the Taney Dragons, was knocked out, Jackie Robinson West took our attention from the pitching mound to center field. With players hailing from the South Side of Chicago, Jackie Robinson West became the first all-black baseball team to win the Little League U.S. championship.

Although no one will be able to take those exhilarating winning games away from the young players, Little League Baseball can take away their title. On Wednesday, the baseball association revealed that Jackie Robinson West was embroiled in a cheating scandal, falsifying a district map and using players from other areas, which is a big no-no in Little League. The historic team has been stripped of its 2014 title, but the fallout will be much greater than a trophy. The Little League International president and CEO, Stephen D. Keener, told ESPN:

The real troubling part of this is that we feel horribly for the kids who are involved with this. Certainly, no one should cast any blame, any aspersions on the children who participated on this team.

The 2014 Little League World Series was all about breaking boundaries with a crack as loud as knocking one over the Green Monster at Fenway. While Davis brought the girl power to last year's game, Jackie Robinson West brought the weight. It's been almost 70 years since Jackie Robinson made his debut in the major leagues, but the presence of African-Americans in baseball has been waning. No all-black team had won the Little League World Series before, and if Jackie Robinson West could, it would inspire African-American boys from Chicago's South Side to Oakland.

And Jackie Robinson West did — well, almost. The team took the U.S. championship, but lost in the world championship against a team from South Korea. Still, the U.S. champions returned to Chicago to find rallies and parades in their names. A few months ago, the team traveled to Washington, D.C., to meet President Obama at the White House. Of course, Obama, who made his home in Chicago for decades, stood behind the boys with pride.

"This is persecution. This is not right," the Rev. Jesse Jackson said at a news conference on Wednesday. "They are still champions." The civil rights activist said he hoped the Las Vegas baseball team, which lost to Jackie Robinson West, would not expect the championship title (as rules go, Las Vegas becomes the de facto winners).

"We went down there to play baseball," added Jackie Robinson West player Brandon Green. "We weren't involved in anything that could have caused us to be stripped of our championship."

Jackson is right that stripping the title is unfair to the players, who were most likely unaware that their adult managers were fudging district boundaries and culling ineligible players from neighboring areas. As Washington Post sports writer Barry Svrluga put it on Wednesday: "Plainly put, they cheated. Not the kids. The grown-ups." But baseball is a team sport, and the rules apply to everyone from the third-string relief pitcher to the general manager.

This unfolding cheating scandal is not just a loss to the young players of Jackie Robinson West, but to the future generation of black boys they would have inspired. Baseball, while seeing a rise in Latino players, has been steadily losing African-American players over the last three decades. According to data from the Pew Research Center, African-Americans accounted for just 8.3 percent of major league players on Opening Day in 2014. Thirty years ago, that number was nearly 20 percent — and even higher in the decades following Jackie Robinson's historic debut.

Now that the win has been tarnished, young kids who watched last year's monumental performance might become jaded. And a sport that may have become a new and much-needed outlet may continue to fall back into obscurity.