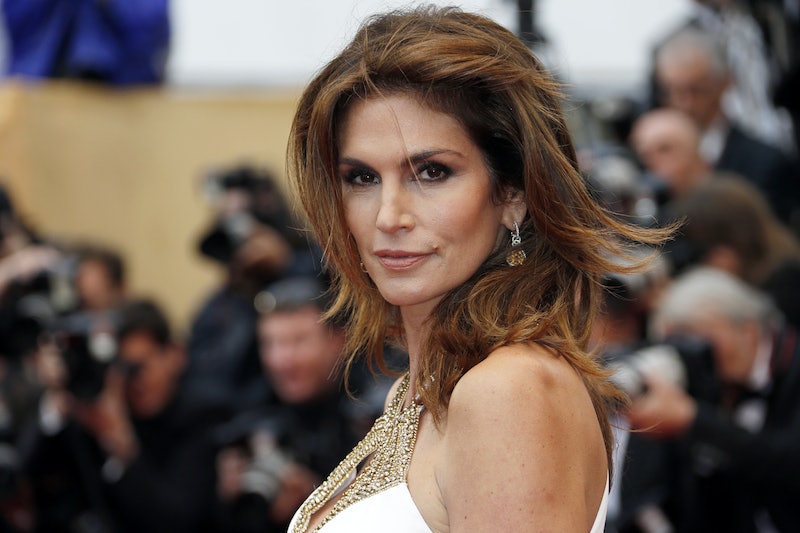 Cindy Crawford has "those days"? No way. Is it even possible that one of the most iconic supermodels in history struggles with confidence from time to time? Apparently, it is — in an interview with Marie Claire at the premiere of her new documentary, Hospital in the Sky, Crawford shared that she doesn't always wake up in the morning feeling like the classic beauty she is.

"I have those days. I don't want to act like I don't — especially now.... When they give me early call times I'm like, 'I'll get up whenever you want...but my face doesn't really like to get up before 7 or 8. I'll be there, I'm just not sure you're going to want to shoot me.'"

Although I'm sure no one in their right mind wouldn't want to have Crawford as a subject, it's refreshing to hear a model talk so candidly about her insecurities. Another point she touched on that made me mentally use that hand-raising emoji: she doesn't deprive herself.

Though Crawford exercises and sticks to healthy eating, she understands that it's possible to go too far. "I try to be a good role model for my daughter in terms of just accepting myself, not saying 'Does this make me look fat?' or 'I can't eat that' or 'I'm on a diet.'"

Hear, hear. Although I've never done it, I know that raising a teenage daughter comes with a special set of responsibilities because I've been one. In a world of so much judgement and pressure to be perfect, parents of daughters have a duty to show their girls how to embrace body positivity, and I'm stoked that Kaia (who's a budding model following in her mom's footsteps) is getting that at home.

So when I wake up tomorrow at 6:30 a.m., look in the mirror, and cringe a little bit (you could call that a daily routine,) I'll take comfort in the fact that Cindy Crawford might be doing the exact same thing. And then I will move on with my morning by channeling my imaginary supermodel, while Cindy moves on with hers while channeling her, well, actual supermodel.