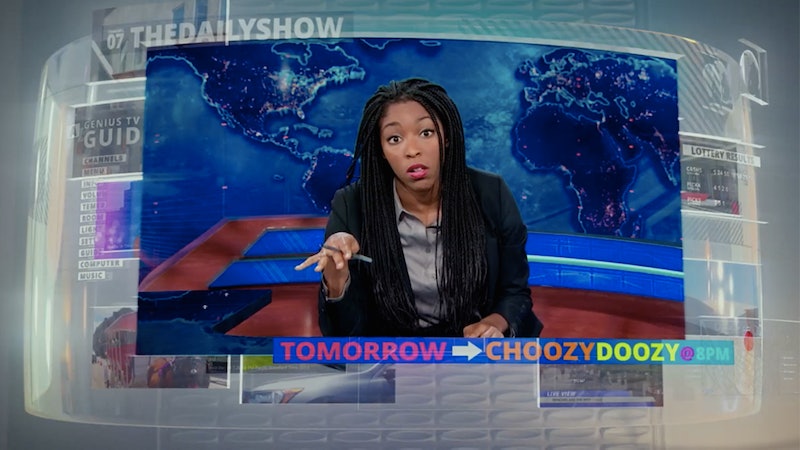 We will always remember where we were when Comedy Central announced that Jon Stewart would be retiring as the host of The Daily Show. It's like when it was announced that The Colbert Report was ending, except worse because The Daily Show will carry on without Jon Stewart and crush us every night with its casual reminder that the days of Stewart are over now. In fact, I can think of only one way in which The Daily Show won't crush me completely, and that's if they make Jessica Williams the new Daily Show host. And, apparently, that is going to become a reality at least by 2025 — at least according to this clip from Hot Tub Time Machine 2, provided to the world by UPROXX due to how timely and accurate it is.

Don't worry. Hot Tub Time Machine 2 isn't actually psychic. The gag about Williams being the new host of the Daily Show was buried among other gags like Neil Patrick Harris being President of the United States and Jennifer Lawrence starring in a Meryl Streep biopic called Streepin' It Real. (Which is kind of dark, if you interpret the biopic as meaning that Streep is deceased in this version of 2025.) However, the fact that it was a gag doesn't mean that it's not a serious wish of the people in 2015 who are currently reeling from the concept of losing Stewart as a host. And if the people aren't wishing for Williams to take the helm here, then they should really start.

Williams has only been on the show for just over two years now and, in that time, she has grown to become more than just the youngest correspondent to be hired or the only African-American woman on the team. From feminism to racism to human rights, there doesn't seem to be a topic from which Williams will ever shy away from tackling with her usual brand of bluntly hilarious rant humor. She is the break out star of the cast, the one whose segments aren't just "segments from The Daily Show" but instead "segments from Jessica Williams on The Daily Show." In short, she's a national treasure and someone that I genuinely enjoy watching night after night, whenever she might appear.

So why should we have to wait until 2025 to watch her, as in the Hot Tub Time Machine 2 universe? If Williams were given the honor of hosting the show, she would be the youngest host, the first woman, and first person of color — male or female. It would be a truly groundbreaking move for the show, a move that is so necessary in the sociopolitical atmosphere that 2015 has started off on. Between the tragedies occurring in Ferguson and all around the country, and the controversy surrounding the shockingly un-diverse Oscar nominees, America is being forced to face the fact that institutionalized racism is still alive now more than ever.

For The Daily Show to close off the year with Stewart passing the torch to a young, African-American woman who has more than earned her stripes in her two years on the show would send such a symbolic message from the show from which many young people derive their news and their values. For The Daily Show to have a young woman of color formatting the news into the satirical, hilarious, informative, educational way that The Daily Show fans, young and old, have come to live by would be such an important move. I'm already excited just thinking about it, and it only happened in a 40 second clip from a comedy film that also told me NPH should run for president.

I'm not sure what the likelihood of Williams actually having a shot at Stewart's chair is — especially since she is not among the correspondents who have ever filled the chair even as a temporary replacement before — but hopefully life imitates art in this case. It would certainly give me a reason to keep tuning into The Daily Show after Stewart has made its exit, not to mention ushering in a new era on the show where you don't necessarily have to be a Caucasian man in their thirties wearing a nice suit in order to deliver people their daily dose of "fake news." Craig Kilborn and Stewart did so excellently from 1996 to 2015, but it's time for a little something different. It's time for Jessica Williams.