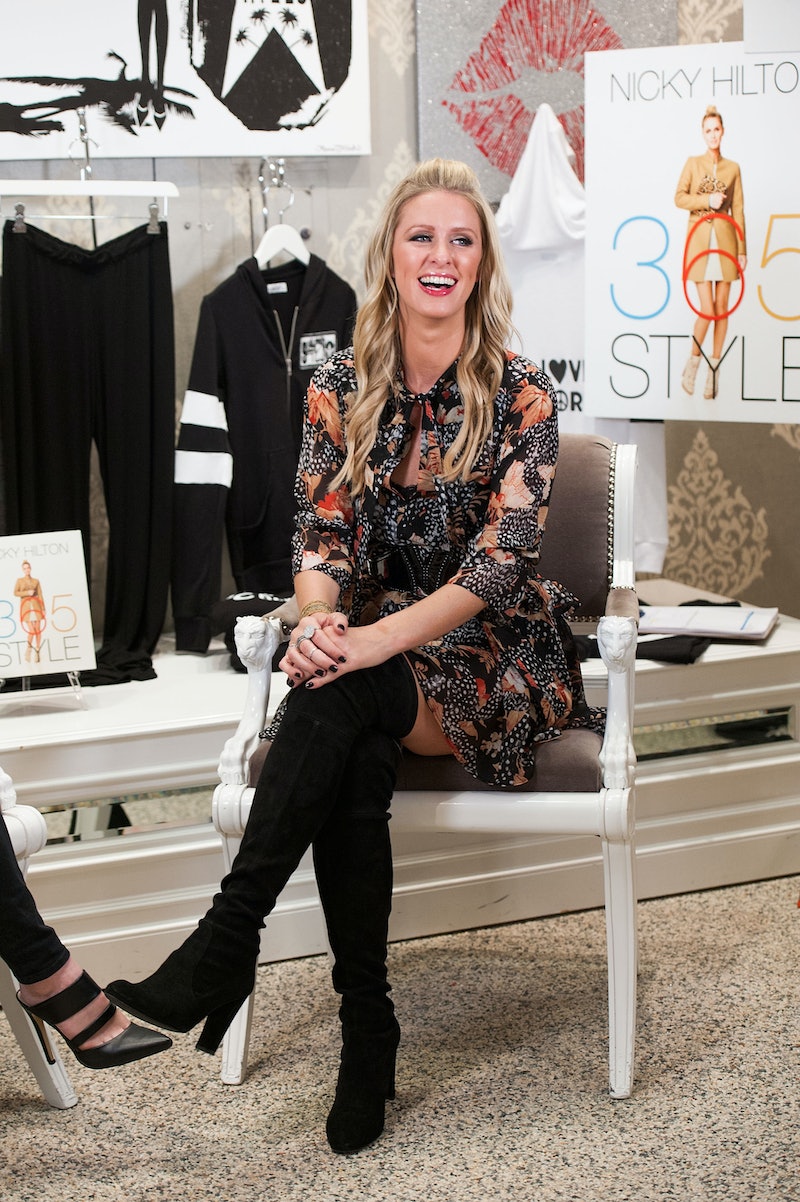 In the PKE — that's the pre-Kardashian era — it was the Hilton sisters who were the reigning reality TV queens and famous-for-being-famous celebutantes. The Kardashian family has long eclipsed the fame of Paris and Nicky Hilton and don't get me started on the Paris/Kim parallels, which start with sex tapes and end with perfume lines. While Paris continues to reinvent herself behind the decks as a DJ, her little (and quieter, in terms of fame) sister Nicky Hilton has created a handbag line with Linea Pelle according to WWD, and it's sounds like it's going to be super, super cute. Really! But why, after all these years, do the Hilts still exert influence on fashion? We'll get to that in a sec.

Here's what we know about the Nicky x Linea Pelle line:

NH Nicky Hilton x Linea Pelle is the actual name of the capsule collection. Hilton has experience with bag designing, since she did so at 18 for Samantha Thavasa. Hilton told WWD that "bags are a huge passion of mine," and that's a good thing, since a girl who loves a good bag will design a good bag. It's a consumer win-win.

Linea Pelle also told the publication that Hilton was a natural choice for the collab, since she is an independent woman with a knack for the art of the high-low mashup, mixing H&M with Hermes.

I'm in. Those are all solid reasons to get behind a bag line. But wait! There's more...

The collection will have 10 pieces comprised of leather and calf hair. There will be black, leopard print, and bone-hued offerings. It will feature clutches and totes.

And the bags were christened after her fave hotels, like the Chateau, Plaza, and Claridges. Wait... but what about the Hilton Garden Inn? Will that be a bag moniker nodding to the family biz? I kid, I kid.

In addition to her partnership with Linea Pelle, Hilton has a cosmetics line on deck and an accessories collaboration with Sephora.

So why after all these years, and with decreased tabloid fame, do the Hiltons still influence fashion? These are three reasons why N. Hilton can pull it off.

1. She Was Never Really Known For Sexploits Or Scandal

While I can't say the same for P. Hilt, Nicky was always the quieter, less famous sister, not known for her sexploits or for flashing the paparazzi when exiting a car. She was always a bit more demure and grabbed less headlines than her flashy big sis.

2. She Has Dabbled In Fashion For A While

With the aforementioned Samantha Thavasa partnership and a mid-'00s appearance on Project Runway, along with her now-shuttered line Chick by Nicky Hilton, which was So Cal-inspired, the younger hotel heiress has always appeared serious about her work in the fashion world.

3. 'Murrica Loves A Comeback Or "When Starlets Grow Up"

Both Nicky and Paris have grown up. They are not wilding in L.A. The fact that they are less famous for nonsense works in their favor when it comes to being taken seriously fashion-wise. They have both shown a chicness with their style as they've entered their '30s.

And that is why they still influence fashion — and why Nicky Hilton x Linea Pelle is bound to be a success.