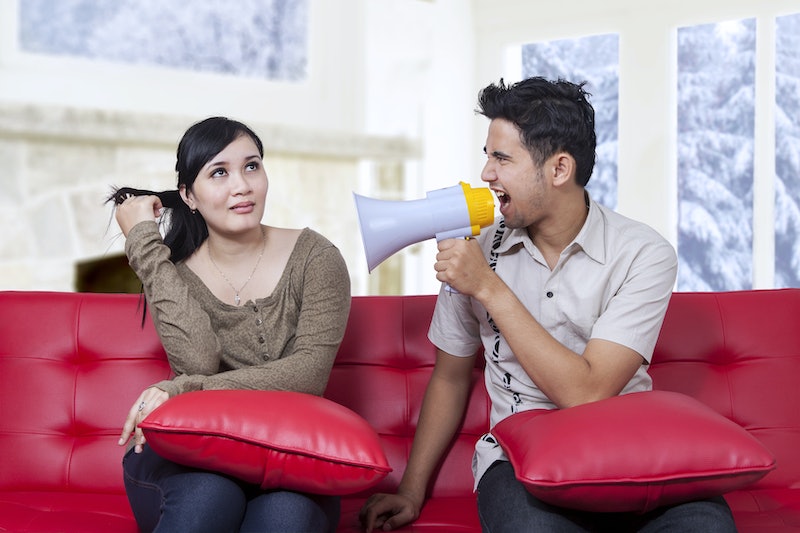 Although you'd probably think cheating would cause the most problems in relationships, a new study out of the UK found that worrying about money causes more relationship problems than cheating. This finding was part of research conducted by the Office of National Statistics looking at how our romantic relationships impact happiness. They identified 10 of the biggest causes for relationship struggles as identified by participants, the top of which was money worries, followed by working long hours, and then cheating. In fact, 62 percent of participants said finances were a potential threat to their current relationship, compared to the 36 percent of people who named cheating in that same category.

Most people's life satisfaction ratings were high, with almost a third of participants rating their life satisfaction at a nine or 10. "Although this high satisfaction rating indicates that all may be well in our family relationships, there are many external factors that can put pressure on them," the ONS explains. That's where the results of this survey come into play, as many couples are facing extreme challenges with finances and working long hours, which isn't a surprise with the slow recovery of the 2008 recession.

Lawyer Gianna Lisiecki-Cunane says that most divorces involve money problems and that unlike stereotypes, in many cases divorces come after years of hardship, rather than just one tragic event that ends everything. It's also possible that the reason there are so many couples with money woes is because it's easier to stay in a marriage if you are having financial struggles, since being on your own usually makes it worse (plus, divorce is expensive). "Those involved recognise that their financial worries are likely to be greater if they are on their own than if they remain in a marriage, albeit one in which there has been adultery," Lisiecki-Cunane reasons.

Could our relationship satisfaction be related to our economic prosperity? Director of the Measuring National Well-Being Programme Glenn Everett thinks so. "Personal relationships are critical to our well-being but can also have a wider impact on society as a whole. For example, good relationships in the workplace have been shown to improve productivity and thus contribute to economic growth," he was quoted as stating.

If you're in a relationship where money worries are causing you trouble, Oakland University psychology professor Terri Orbuch, Ph.D. advises you to start talking about the problem, since many couples will avoid the issue entirely. Find a good, neutral time to discuss the subject and be willing to address the underlying issues that often come from financial woes (like self-esteem, for example). She advises you to work together to create a plan of action and to be accountable on following through.

More like this
How To Do The Intimacy-Boosting Lotus Sex Position
By Laken Howard and Lexi Inks
Kim Kardashian & Pete Davidson’s Relationship Timeline From Start To Finish
By Jordyn Tilchen and Bustle Editors
The Top Mistakes Scorpios Make In Relationships (& How To Avoid Them)
By Nina Kahn
What Is The Forest Personality Test? The TikTok Trend, Explained
By Georgina Lawton
Get Even More From Bustle — Sign Up For The Newsletter