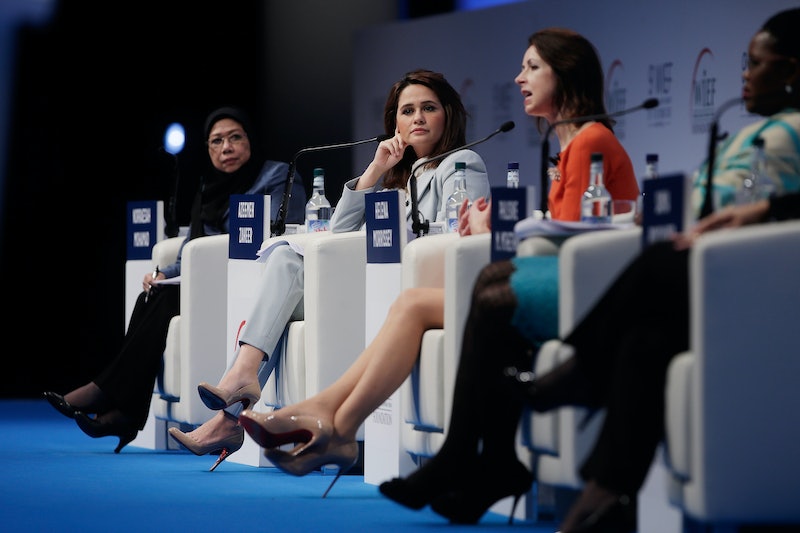 A few months ago, I attended a weeklong seminar for female media professionals. On the first day, each of these dozen women — who I would come to learn were each remarkable in their ambition, smarts, and professional success — wandered into the conference room and participated in standard-issue female professional meeting etiquette: Each placed her shoulder-slash-computer bag at a spot at the table, poured herself a paper cup of coffee from the urn, then proceeded to introduce herself to the others in an open, friendly way that included a requisite compliment on the other’s physical appearance. “Oh, I love how you pair the bright orange dress with the yellow shoes!” “That lip color looks so good on you!” “Love your haircut! Where do you get it done?” “Your necklace is fabulous!” Each one, that is, except me. Now, I’m a girl just like you. I care about my appearance and fret about what to wear when the pressure is on to make a good impression or meet lots of new people. I am not immune to the female complex that equates self-worth with physical beauty. When entering the seminar on the first day, I had a mini-existential accessory crisis about my simple brushed-gold drop earrings upon sight of a glamorous California businesswoman. She was so perfectly turned out, from her teased hair to her chunky jewelry to her polished nails and patent-leather stilettos, that I felt the urge to crawl back into the subway like a filthy rat in my green and black silk Kenneth Cole zippered sheath and no-name black pumps. But I stopped. I observed. And (just being honest here) I judged. Here we were in an environment designed to educate and empower women in business. The very, verrrry first gesture of support we offered each other was to admire clothes, hair and makeup. I’ve certainly done the very thing I was judging. Even on this day I felt the urge to chime in and butter up my new colleague with a question about her intoxicating fragrance. But I restrained myself.

When I see this nonsense going down with women, to calm myself I close my eyes and envision Jamie Dimon and Lee Raymond moseying into a J.P. Morgan Chase board of directors meeting. “Oh my god,” I imagine Dimon saying. “Those cufflinks are killer!” To which Raymond might reply: “That suit! You. Must. Give. Me. Your. Tailor’s. Number. Seriously!” Now, I’m making a bunch of wild guesses here, but I’m pretty sure this doesn’t happen. Because they have other things to focus on. Like ruling the world.

Now, if you’re like my West Coast dynamo pal, your appearance is a powerful asset. If not, it may be a point of consternation. It’s like saying to a stranger over dinner: “Wow! You have a huge appetite!” Maybe that is received as a compliment, evidence of gusto for life. But perhaps the person has an eating disorder and the sum of food she consumes is a very sensitive subject. I would venture that most women have at least minor hangups about their appearances (which is why you’re deflecting your own insecurities by aiming to boost the confidence of your new friend). So let’s just skip that one little part of her whole person for the time being and focus on other things. Instead, try: Where do you live? What do you do for work? How ’bout those Mets, huh? Have you tried those new seaweed snacks?

3. It's bad for the advancement of women.

I know that your compliments are made with the best of intentions. You want to put the other person at ease, connect with her. But studies find that the more attention paid to a powerful woman’s looks, the less likely she is to succeed. One journalist studied female U.S. presidential candidates since 1872 and found – not surprisingly – that the women in these races were the subjects of appearance-focused media attention four times more than their male competitors.

All that attention on Hillary’s hairdos and Sarah Palin’s good looks came at a price: A recent study found that when the media focuses on a female candidate’s appearance, voters are less likely to support her in the polls. This backs earlier findings by University of South Florida researchers, published in the Journal of Experimental Social Psychology. The title of their paper says it all: “Objectifying Sarah Palin: Evidence that objectification causes women to be perceived as less competent and less fully human.” Now you know.

You Might Also Like:Why and How We Should Talk Work With Our KidsHow Talking About Money Can Boost Your Earning PowerWhy I Love My Cupboards (Almost) Bare