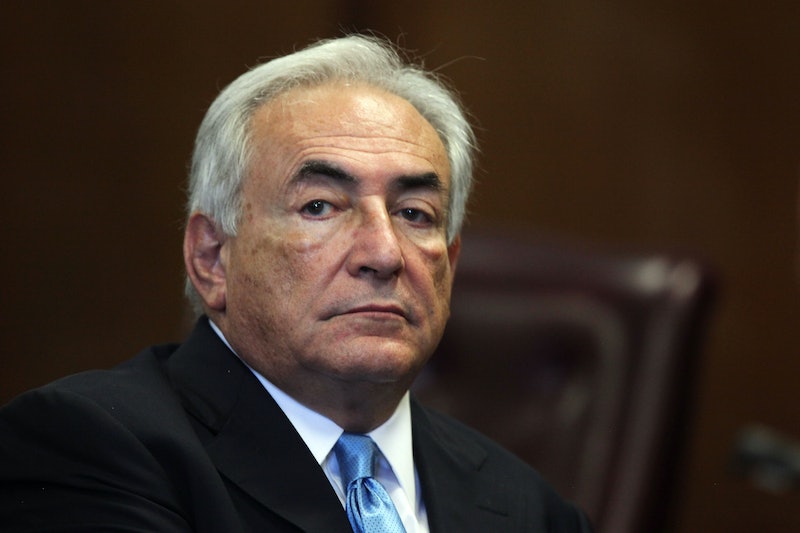 Since embattled former International Monetary Fund (IMF) chief Dominique Strauss-Kahn's trial for alleged pimping got underway in Lille, the spectacle has dominated French headlines. The onetime presidential hopeful is charged of facilitating prostitution, a term known as "aggravated pimping," in France. According to prosecutors, Strauss-Kahn, along with more than a dozen others, operated a prostitution ring out of luxury hotels in Paris, Washington, Lille, and Brussels.

Although France is no stranger to politicians' unorthodox love lives, the travails of Strauss-Kahn (or DSK, as he is known in Paris) have captivated the country in a way that the exploits of past statesmen have not. "It is about sex, power, and money," Alexander Stille, a professor of international journalism at Columbia University, told Bustle. "And those are the things that add up to a classic tabloid story."

Besides heading the IMF, Strauss-Kahn was once considered a top contender and a potential challenger to Nicolas Sarkozy for the French presidency. His problems began in 2011, when he was accused of sexually assaulting a hotel maid in New York. Although the case was ultimately dropped, later that year a French writer accused Strauss-Khan of attempting to rape her in 2003. If those incidents damaged his reputation, the Carlton Affair — the name by which the current trial is known — has effectively destroyed any lingering political aspirations.

But there are plenty of other reasons the DSK story has the French so enthralled.

His Exploits Were Allegedly Over The Top

Lecherous, aging politicos are nothing new in France. Former President François Mitterrand had a daughter from one of his many extramarital dalliances, and the story of current President François Hollande's affair with a French actress was mostly met with a collective, gallic shrug. Politicians' public and private lives are seen are strictly separate in France, with one having no bearing on the other.

His Debauchery Doesn't Jive With His Socialist Platform

All this debauched privilege brings Strauss-Kahn's position as a member of the wealthy and powerful to the fore and stands in stark contrast to his purported socialist ideology. This isn't the first time Strauss-Kahn's lavish lifestyle has come under fire. In 2011, critics referred to him as a "champagne socialist" after an image surfaced of Strauss-Kahn climbing into a pricey Porsche.

Even Strauss-Kahn himself admitted that his position of power fueled his sexual decadence, telling the courtroom in Lille:

I was one of the world's most powerful men. Many people wanted to please me. Women have offered themselves to me ten times. It is nothing unusual to me.

His Fall From Grace Is A Classic Story

Strauss-Kahn's legal woes embody the the classic fall from grace story. "This new scandal is definitely ruining his chances of a political future in France," Fanny Dassié, a French journalist in Paris, tells Bustle. "Now he has lost credibility in the eyes of the French public."

"He did self-destruct in a very public way," Stille agreed. "There is also the schadenfreude — people enjoy seeing the mighty fall, and you don't get more mighty than being on the threshold of the French presidency."

His Attitude & The Trial's Circus-like Atmosphere Are Fascinating

Perhaps the most intriguing element of this whole train wreck? Strauss-Kahn himself. Testifying that he had no idea that the women involved in his sex soirées were prostitutes, Strauss-Kahn has delivered flippant sound bites that could have sprung from the pages of a tawdry comedy of manners. "I had a very hectic life, with just a few outlets for recreation, and these sessions were part of that," he told a courtroom in Lille. Even his lawyer has gotten in on the action, telling the court: "I dare you to distinguish between a prostitute and a naked socialite."

The spectacle surrounding the proceedings has also added to its allure. In addition to the crush of reporters, obscenity-shouting topless activists sprung on Strauss-Kahn's car at the start of the trial — possibly marking the first time that his encounter with half-naked women was not a happy one.