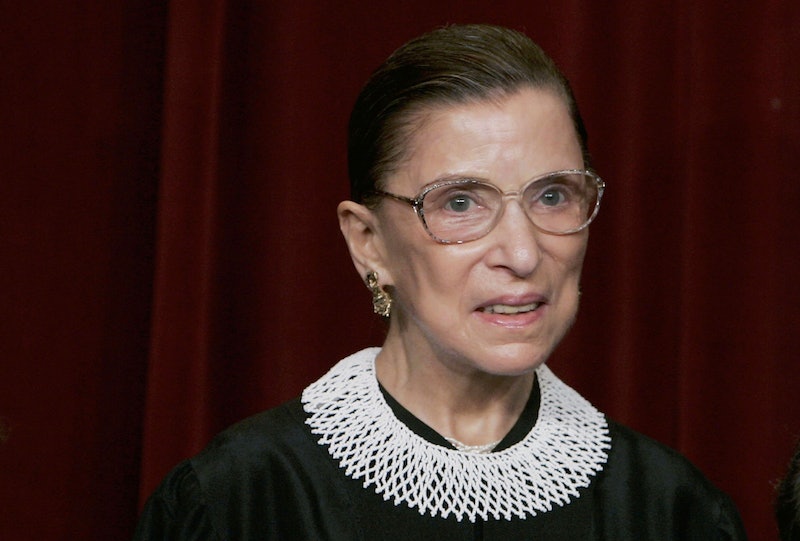 In an interview with Bloomberg on Wednesday, Ruth Bader Ginsburg said that America was ready for gay marriage, because our collective attitude toward the subject has shifted tremendously in the last few years. That's largely due to a monumental decision the SCOTUS made in June 2013, and it's expected to inform another historic decision scheduled for this June, when the high court decides whether same-sex marriage is a constitutional right. According to Ginsburg, it "would not take a large adjustment" for the nation to accept it as one.

During the interview, when Bloomberg asked whether Ginsburg was concerned that parts of the country might not accept same-sex marriage as a constitutional right, the Supreme Court Justice answered that it was "doubtful." She added:

The change in people’s attitudes on that issue has been enormous. In recent years, people have said, "This is the way I am." And others looked around, and we discovered it’s our next-door neighbor — we’re very fond of them. Or it’s our child’s best friend, or even our child. I think that as more and more people came out and said that, "This is who I am," the rest of us recognized that they are one of us.

These are serious words of encouragement for anyone who is more than ready to see marriage equality across America — especially since RBG is a member of the high court who will decide on that very issue. This April, the Supreme Court will hear cases to overturn gay marriage bans in four states — Tennessee, Kentucky, Ohio, and Michigan — and then will decide in June whether gay marriage is a constitutional right or if individual states can enforce bans.

If the Supreme Court rules in favor of making gay marriage a constitutional right, it would prevent any future confusion like the people of Alabama saw this past week. In January, U.S. District Judge Callie Granade struck down Alabama's gay marriage ban, a ruling that was supposed to go into effect on Monday — but then on Sunday night, Alabama Supreme Court Chief Justice Roy Moore ordered the state's probate judges not to issue any marriage licenses in accordance with the previous gay marriage ban. Judge Granade is expected to hold another hearing on Thursday that could potentially settle the matter.

Needless to say, it would be nice to prevent any headaches like this in individual states going forward, and that's exactly what a SCOTUS decision would do. Two years ago, the Supreme Court struck down parts of the Defense of Marriage Act to grant federal benefits to all same-sex married couples, no matter their state, in a landmark decision that started to move the needle toward national acceptance.

Now, with same-sex marriage legal in 37 states, Ginsburg isn't worried that the Supreme Court will face much protest if they were to rule in favor of the constitutional right. America is ready; hopefully the Justices are too.