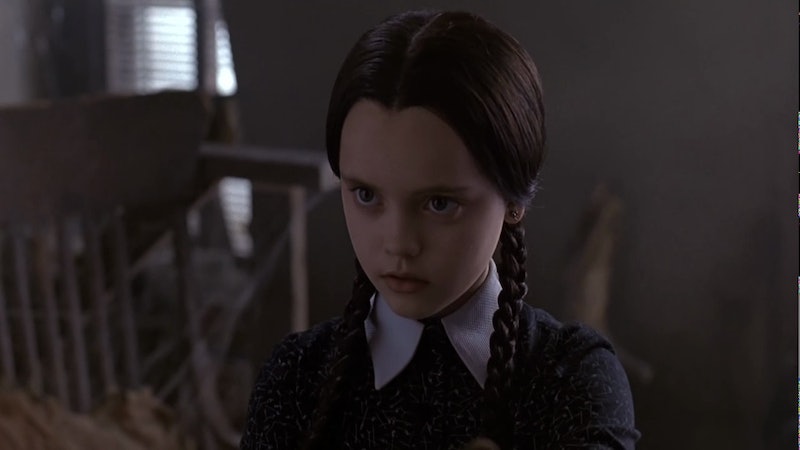 "Adult Wednesday Addams" is a glorious web series which, duh, imagines Wednesday Addams all grown up. Created by, and starring, the clearly genius Melissa Hunter, adult Wednesday Addams takes on some Axe body spray wearing catcallers in her latest adventure. After being randomly catcalled in the street by two assholes driving by, Wednesday does what we all wish we could do: She exacts the most glorious revenge while making a strong point about the nature of street harassment. Tracking the catcallers down, she pays them a house call, bringing three terrifying henchmen with her. Just when you think the henchmen's job is to physically destroy the perverts in question, Wednesday explains that they'll be standing outside on the side walk "paying compliments" to the now terrified catcallers.

The threat of physical violence women feel when they're catcalled is very real. It's visceral. You can feel it in your guts. And perhaps the only way to make men truly understand that is to make them feel it too. Adult Wednesday Addams gets it right: Education is sometimes completely experiential. Wouldn't it be wonderful if, instead of explaining to men how their catcalling makes us feel, we could make them feel exactly the same way? Watch the video below and cheer into your computer screen:

Here are some more, albeit unnecessarily violent (and definitely not advisable, but probably often fantasized), reactions Wednesday Addams might have towards catcallers:

1. Burning their homes to the ground

2. Threatening to slit their throats

3. Going on an axe-wielding revenge mission with her mother

5. Practicing her cross bow aim by shooting at an apple held in their mouth

Basically, I feel like Wednesday Addams could handle any lecherous dude situation.