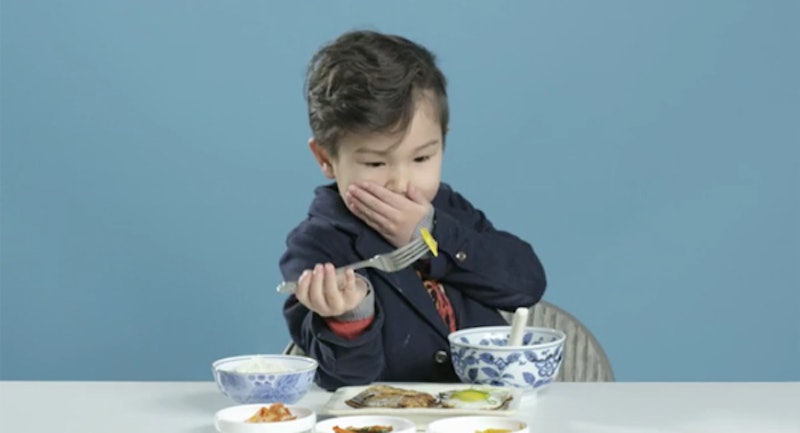 “I just found a dead fish in it” is not a thought most of us have had while eating breakfast, but we might—if we lived in Korea, that is. This video takes seven children on a gustatory journey across the world, challenging them to try traditional breakfasts from Korea, Finland, Brazil, Poland, Vietnam, and the Netherlands. The results of the experiment are hilarious and completely adorable as the kids work their way through such delicacies as kimchee, coffee, anchovies, and something called a “century egg” (which, the video helpfully tells us, is an “old ass egg”).

The video was inspired by a fascinating article in The New York Times, in which Malia Wollan investigates the way that children eat breakfast all over the world. As Wollan points out, children’s tastes are conditioned from a very young age, so that while an American child—used to breakfast foods like cereal, eggs, and toast—might recoil from eating fish for breakfast, “a child in the Philippines might happily consume garlic fried rice topped with dried and salted fish … at 6 in the morning.” Considering the notorious pickiness of young eaters, the children in this video deserve props for being surprisingly game about the whole thing. Although they aren’t shy about their distaste for certain foods, they are nevertheless willing to try them. Some of the kids’ comments and facial expressions are hysterical—for example, this child’s reaction to drinking coffee (a standard part of a kid’s breakfast in Brazil) is completely priceless:

He’s then asked what he thinks coffee tastes like. His response: “Cow poop.” Sir, as a committed tea drinker, I applaud you.

Check out the whole experiment here: