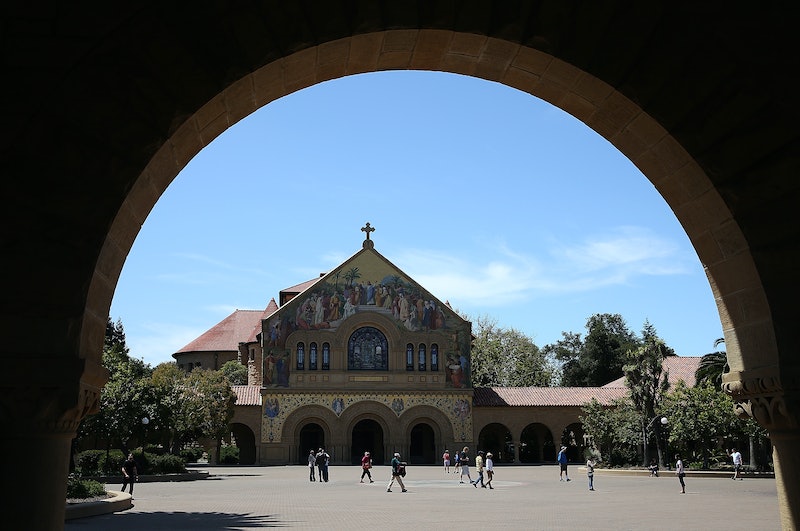 Colleges across the country have come under fire of late for how they handle — or, rather, mishandle — sexual assault and rape cases filed by students. Yet another high-profile case has emerged at Stanford University, this time involving an undergraduate and her mentor, a Silicon Valley tycoon. The New York Times reported Ellie Clougherty's claims that Joe Lonsdale, who helped found the data-mining company Palantir Technologies, raped her and continued an abusive relationship for a year.

Clougherty met Lonsdale on a trip to New York, where a photographer Clougherty knew from previous modeling work introduced the two. They struck up an email conversation and when Clougherty returned to Stanford for her junior year in the fall of 2011, he asked her to meet him for a drink. In the spring, Clougherty started E145, a class for her management science and neuroengineering major in which teams of four students were matched up with two mentors. Lonsdale was matched up with Clougherty's team and the two began meeting regularly with the team and alone.

Clougherty says that early on in the mentorship, Lonsdale picked her up from campus around 10 p.m. for what she expected to be a casual dinner to talk about the class project. Without asking, she says, Lonsdale drove to his house, where he pulled her into the bedroom and raped her. Lonsdale denies these allegations. The then 21- and 29-year-olds began a year-long relationship that Clougherty claims involved rough sex that she that she didn't consent to.

After finishing her degree online, Clougherty and her parents flew back to Stanford in May 2013 to ask the university to investigate, submitting a written account of her assault allegations that included texts and emails. Around the same time, students across the U.S. were criticizing their college's actions toward sexual-assault cases. In 2011, the Office of Civil Rights in the Department of Education sent letters to every college that receives federal funding reminding them that under Title IX, the 1972 law aimed toward preventing sex discrimination in education, universities must respond to and prevent sexual violence.

The letter also stated that universities should switch to a lower standard of proof for determining the outcome of a case, meaning that if the person was more likely than not guilty (above 50.1 percent likely), they should be found guilty. Stanford adopted this new policy, as well as another to require full investigations of reported sexual harassment or assault.

Stanford appears to have only investigated whether or not Lonsdale broke the university's rules against relationships between teachers or mentors and students at this time. The university found Lonsdale guilty of violating this rule, and suspended him from mentoring undergraduates for 10 years. Not pleased with the minuscule punishment, Clougherty recruited a lawyer to represent her in negotiations with Stanford, which led to a settlement deal from Lonsdale, containing a nondisclosure agreement that Clougherty did not agree to. Lonsdale denies making this settlement offer.

Stanford then opened another investigation into the allegations, and found that Lonsdale dated another student after his relationship with Clougherty. The school was also receiving backlash at the time from another investigation involving three female students who all reported sexual violence from the same male student. The man didn't deny the allegations, but was allowed to stay on campus any way. Following the new investigation into Lonsdale's actions, the university found him guilty of sexual misconduct and harassment during his relationship with Clougherty. He was banned from the Stanford campus, but since the ban, he has visited for a private lunch. In January, Clougherty filed a civil lawsuit against Lonsdale for sexual abuse. Lonsdale still denies the allegations and sued Clougherty for defamation.

This case is yet another example of the expanding movement of college students condemning their universities' sexual assault policies and investigations. At Columbia University, Emma Sulkowicz carried her mattress around campus in protest of her alleged rapist being allowed to stay at the school. With so many women coming forward to complain about the treatment of their cases, universities clearly need to improve how they handle these claims.

On the other hand, Clougherty's case also portrays the difficult spot universities are sometimes put in. Because Lonsdale wasn't a student or university faculty, the school didn't have much power. Banning him from the campus, although it wasn't fully enforced, seems like the most they could do.

It also becomes increasingly difficult to investigate a sexual assault allegation that happened years ago for an institution that doesn't typically deal with criminal cases. In Clougherty's case, filing a civil suit seems like the best way to obtain the harsher punishment.