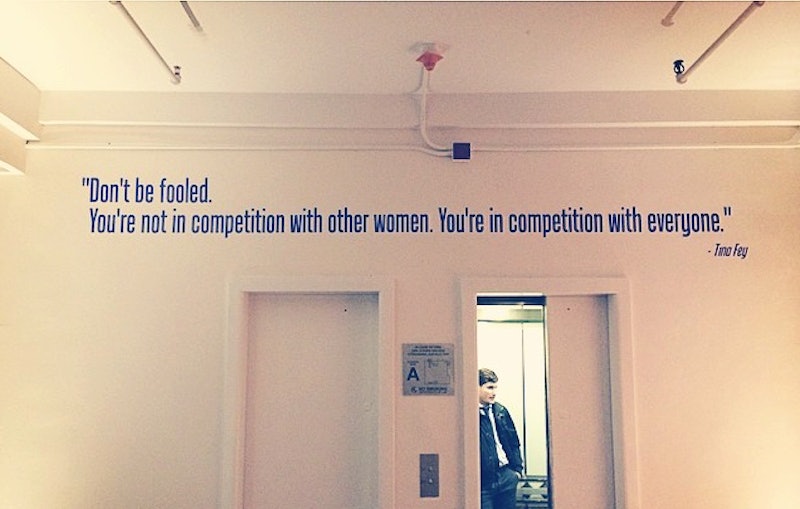 Being competitive isn't synonymous with being an asshole. Sure, a lot of hyper-competitive people are assholes. But you can have a competitive edge in the workplace without serving it up with a side of frat bro style "whoop ass". You can be ambitious, driven, and nice. I mean, you don't have to be. You can be as mean as you like, but I happen to think that when you're a good person, your successes will be sweeter, and you'll be generally happy. That's just how it works: When you project happiness outward, happiness reflects back onto you. On the other hand, being nice and happy isn't synonymous with being a pushover. As a human with the capacity for containing endless complexities, you're very much allowed to be hard and soft at the same time—and it will serve you very well to do so in a professional setting. The benefits you'll reap from finding that balance will be greater than the ones you'll have being either completely meek or totally cutthroat ruthless.

Look at Leslie Knope ("Don't mind if I do!" said everyone ever): She might be a fictional character but she's nailed the balance of passionate competitiveness in the workplace while still being an awesome person. She's vulnerable and sweet and earnest and not only cares about people, but manages to turn caring about people into a professional strength. Yes, she is a fictional character who basically lives in a cartoon wonderland where no one is a terrible person and good guys always win, but that doesn't negate the authenticity of the point: You can be a high octane achiever and also a nice person, even in the real world. It's not even as hard as it looks! All it takes is concentrating on the job at hand, focusing primarily on your own personal goals, and not shooting down anyone you've deemed as your "competition" by any other means than just doing impeccably good work. Here are six things you can do to remain professionally completive without turning into a total asshole:

The best way to be competitive is to be good. No one can take that away from you. Aim to perfect what you do, and no one will ever be able to diminish how much you deserve everything you've achieved.

2. Take responsibility for your own mistakes

Everyone knows that in a workplace hierarchy, shit rolls down hill. You'll often find yourself picking up slack from higher ups or taking the flack when directions from on high don't yield the expected results. That's just how corporate bureaucracy works, unfortunately. But when it comes to making mistakes within your own level or team, own it. Don't try and pass the buck off to someone else in an attempt to bring them down and/or build yourself up. Everyone makes mistakes. If you take responsibility for the ones you make, and take the time to fix them, you'll learn, grow, and become better at your job. You also won't be an asshole who throws co-workers under the bus for things that are just as much on your head as anyone else's. Being competitive should be about personal excellence based on merit, not on stepping on other people to get where you want.

If you're trying to get ahead at work, shut your damn mouth around the water cooler, especially when you're talking about the way other people do their jobs. Again, when you're competing, you should be competing against yourself so that you're rewarded on your merits, not for the fact that you bad mouthed Sue Bloggs so much she became unpopular around the office and you rose up instead of her. Building work friendships are great, but it's too risky to try to do so at the expense of others. The fact is, you can try to inflict damage on everyone else's reputation, but the worst reputation anyone can have is a backstabbing gossip, so...just sayin'.

The thing about doing a job well is doing the job well. Put your head down, your headphones on, and have a Flashdance montage moment (except replace dancing with whatever it is you do, unless dancing is what you do, in which case, congrats on making that your career since I understand that to be quite a hard thing to accomplish). Hard work pays off, especially if you're patient. People notice hard work. Promotions are given to hard workers. And even if you don't nail the work exactly, your dedication, commitment, ability to take criticism and re-tool your product, diligence and heads down bums up approach to the job will reward you.

Being that high-strung competitive person in the office to whom every work scenario is like life-or-death Dante's Peak opening scene style drama is not only fun, it's a drain on your co-workers. Put things at work in perspective: If things don't go exactly right, it's not the end of the world. Take things in your stride, and try to remain cool, calm and collected. Don't go Luther tantrum on your desk. Sometimes it's okay to call it quits after a 16-hour day of putting out fires and go have a glass of wine. If you stress too much, you'll end up putting unwarranted pressure on your team-mates, and everyone in the workplace will know you as that asshole who throws a fit whenever there's a slight hiccup. And no one likes that asshole at work.

6. Use your success to guide people beneath you

As you become more successful, channel your inner Drake: You started from the bottom, now you're here. Being competitive is great, but professionally, that shouldn't be to the detriment of others. Cultivate relationships with people below you and pass on your wisdom. There's enough room for everyone to do well. And if you're kind to the people beneath you (but stern too, obviously, it's still work), they'll work harder for you, and potentially form a relationship with you that will reward you as they start to become successful too. Being competitive in the professional arena doesn't need to be a solitary endeavor—the more you help others, the more you'll be helped in return.

More like this
Black Women's Equal Pay Day Highlights An Upsetting Problem
By Brandi Neal
3 Zodiac Signs Most Likely To Be The Center Of Attention
By Nina Kahn
How To Communicate With A Scorpio, According To An Astrologer
By Nina Kahn
This Tarot Card Means It's Time To Reach Your Magical Potential
By Brittany Beringer
Get Even More From Bustle — Sign Up For The Newsletter