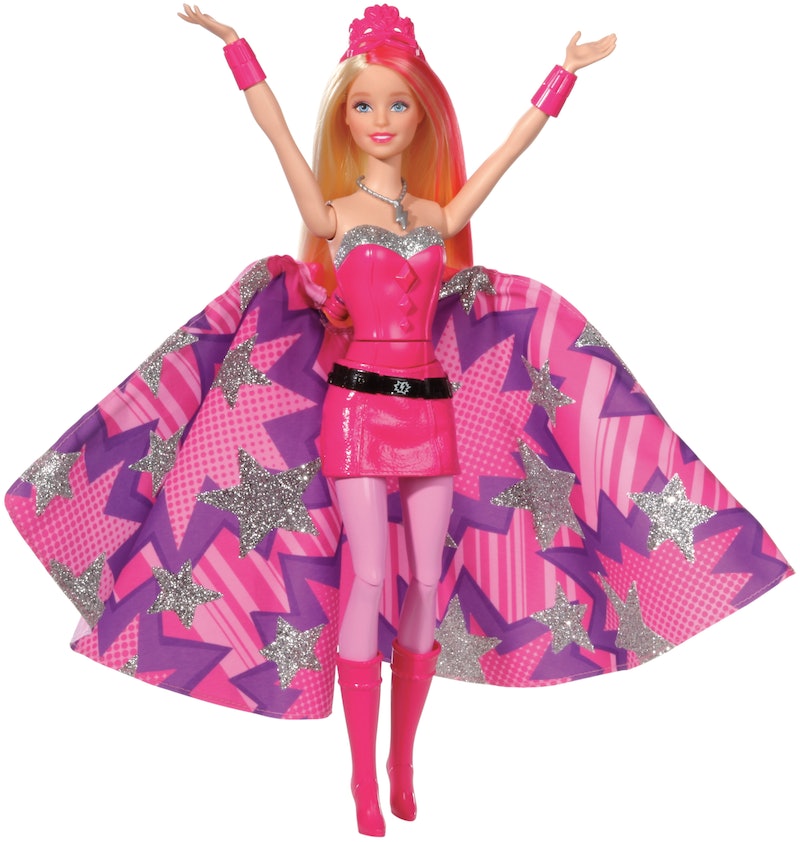 There's something a little different about Barbie in 2015 — she's not just a doll anymore, but a full-fledged superhero. Mattel's Barbie in Princess Power is debuting this week at the New York Toy Fair. Why the change? In the official press release, Barbie is emphasized to be unique in its branding being "for girls, BY girls." Mattel found that girls wanted to have a superhero they could look up to and play with —not surprising, since there aren't many superhero's designed for girls or who are women themselves (can you think of any besides Wonder Woman?). They conducted a survey with over 2,400 participants around the world of girls ages three to 10 and found that 90 percent wished there were more superheros designed for girls. In response, Mattel created a new feature film, line of dolls, costumes, and more under the Barbie in Princess Power name.

While many might say that you can't save the world and wear lipgloss, Mattel disagrees and doesn't want to force girls into masculine roles. "While some popular toy brands push a mom/parent’s POV on girls saying that they can’t be a princess AND an engineer, Barbie knows that they see the duality and want both," they say.

I love this message, since femininity is often devalued in our society and powerful women who are too feminine often pay the price of misogyny. Letting girls explore gender roles without imposing one way of being feminine onto them is very empowering. It's important to also consider though if this is really changing anything. Girl's see all of their role models dressed in pink and wearing tight clothing, so it's questionable how transformative this new Barbie really is.

While the new doll is making her first appearance at the New York Toy Fair, the DVD movie of Barbie in Princess Power will be released in a few weeks. The new collection of Barbie toys and dolls is currently available online now, though.

In addition to all of that, Mattel has also created a social media campaign #BeSuper "to celebrate everyday acts of being super." You can go to BeSuper.com to join the action squad, shop the collection, and even create your own comics. It seems that Barbie has got a lot on her plate!

Mattel is aiming giving girls the power to create their own stories and is empowering them to dream big. Girls are being given the agency to make their own decisions and define what being a girl means to themselves...sort of. If they like pink, are feminine, are white and have a thin body. I think a lot of this seems to be great on the surface (even I was sold for awhile!), but doesn't really do anything to address the core issues that girls face. Empowerment is great and all but shouldn't the messages be more inclusive?

Is Barbie a feminist? Is her new image empowering? Is she just reinforcing beauty standards? The answer isn't clearcut, but nonetheless Mattel still has a lot of work to do.

More like this
10 Organizations To Support On Latinx Women's Equal Pay Day
By Caroline Burke and Mia Mercado
30 Rihanna Outfits From The Early 2000s You Totally Forgot About
By Amy Sciarretto
20 Christmas Movie Quotes That'll Get You In The Holiday Spirit
By Alexis Morillo
Dyson Is Dropping Futuristic, Air-Purifying Headphones
By Rachel Lapidos
Get Even More From Bustle — Sign Up For The Newsletter