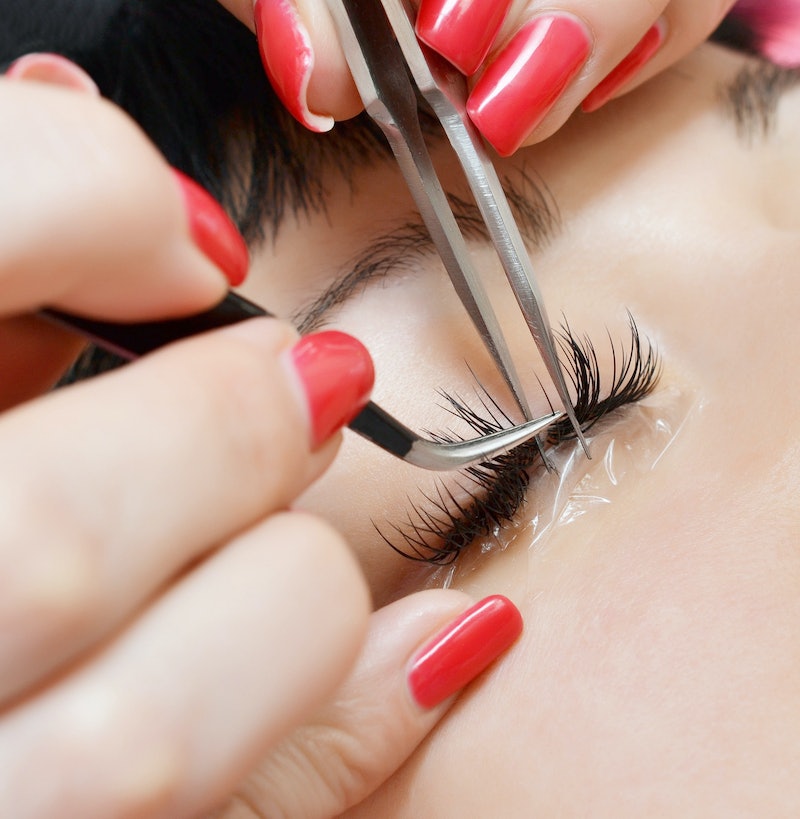 When my older sister first told me about her eyelash extensions, I totally balked at the idea of it. The thought of spending upwards of $70 and two hours of my life to have fake lashes pasted onto my eyes one at at time was bananas. B-A-N-A-N-A-S. I could think of a million things at the top of my head that I'd rather put that money and time towards. I also didn't want to be one of those girls who, when asked, "Are those real?" had to shamefully reply, "No." And then one day, it happened. I bought a Groupon and met a lovely cosmetologist named Mika. Two hours later, I was a new woman — a woman with long, Kardashian-esque eyelashes. My sister was right. There was no turning back.

That was almost a year ago and since then I've gone back every four to five weeks to get my extensions refilled and touched up. Even though it's become a pretty regular part of my life, I haven't quite gotten used to the entire process. Because, in case you haven't heard, it's a serious process. And no matter how many appointments I've sat, er, laid through, I still experience the same exact roller coaster of emotions every single time. And here's exactly what that feels and looks like.

This is the part where I do a quick little breathing exercise to prepare myself for having my eyes shut and poked at for the next hour and a half. It's a lot of inhaling and exhaling and telling myself things like, "It's going to be OK" and "You got this!"

2. The "I Need to Think About Something Else" Stage

It's probably only been five minutes into the procedure and I'm already feeling restless. Which is not good, since I have more than 60 more minutes to go. Eek. At this point, I'll usually pop in some headphones to listen to Invisibilia or another podcast to distract myself from thinking about what's actually going on.

3. The "Why is This a Thing That Exists?" Stage

The last stage quickly evolves into this stage — the part where I start to hate myself for succumbing to such a silly beauty practice. It's also the part where I think of all the people in my life and beyond who would judge me so hard right now. Like my dad. And maybe Jane Goodall. Or the Pope.

About an hour into the appointment, I start to feel panicked. Because FYI: They tape your eyes shut. Like they would if you were dead or something, probably. I'm slightly claustrophobic, so at this point, I start to freak out a little bit. I'll try to open my eyes only to realize that I can't. That's when I'll revisit stage 1, and try to take some deep breaths. Total confession: one time, I almost had a panic attack. In the middle of getting my lashes done, I got up, ripped the tape off my eyes and stepped outside for some air. The lesson to be learned: Don't drink coffee before you get your lashes done.

6. The "How Much Longer Is This Going to Take?" Stage

After I've calmed down, I enter the stage where I get really antsy and start counting down. I'll try to figure out how many more lashes she needs to put on, without actually asking her, because that probably gets super annoying. It's like the equivalent of "Are we there yet?" so, I refrain.

7. The "I feel SOOOO Pretty" Stage

Finally, it's over. At this point, my cosmetologist will hand over the mirror and I'll bat my newly-glued lashes at myself with pride. I quickly forget the panic and agony I had literally just experienced because OMG, have you seen how pretty my lashes look?

More like this
42 Black Owned Fashion & Beauty Brands To Support Today & Always
By Mekita Rivas, Shea Simmons, Kui Mwai and Dominique Norman
Most Comfortable Underwear For Big Butts
By Audrey Williams
14 Fall Lipstick Colors That Are Trending For 2022
By Audrey Noble
11 Fall 2022 Makeup Trends You Can Start Wearing Now
By Olivia Rose Ferreiro
Get Even More From Bustle — Sign Up For The Newsletter