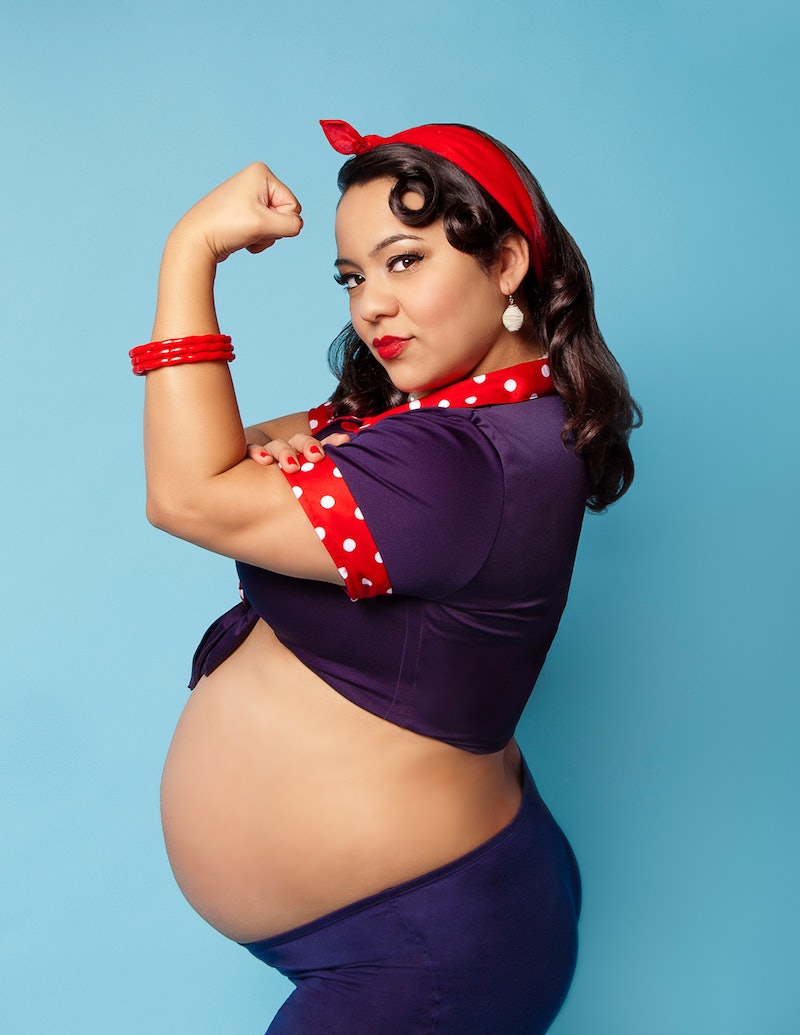 For reasons I've never been able to understand, whether or not a woman can be simultaneously feminine and feminist is constantly questioned — but just in case there were still any lingering doubts, photographer Sophie Spinelle and her team at Shameless Photography are here to put the debate to rest. The simple answer? Heck yes, women can be feminine and feminist — and what's more, they've got the pictures to prove it.

Shameless Photography specializes in shooting pin up-style portraits with a fiercely feminist, body positive, inclusive point of view. Founded in 2009 by Sophie Spinelle, its goal is to create a space for women to feel “safe, beautiful, and empowered,” no matter who they are. Write the team on their “About” page:

“The tools of makeup, lighting, and photography can create images that are part fantasy, part reality. It is a powerful thing to enter the realm of fantasy, and to know that you can do so whenever you choose. No model or movie star owns the realm of fantasy — we all do. In some small way, we hope that our business can help women to feel more empowered and embodied — and to see femininity as a space of play and possibility rather than shame.”

Spinelle's first career involved working for change at a policy institute; since taking up photography and starting Shameless, though, she hasn't looked back. The first line of her bio tells you pretty much everything you need to know: “Sophie believes the complexity and power of glamour, and thinks rhinestones can be radical.” Ayyyyy-men.

Although pin up images are often associated with the term “cheesecake” (the female equivalent of “beefcake”), Shameless uses them to challenge the idea that being "sexy" is by nature exclusive — that you're either smart or sexy, fat or sexy, skinny or sexy, pregnant or sexy, and so on and so forth, through as many adjectives and descriptors as you can imagine. In the world of Shameless Photography, it's not "sexy or," but "sexy and." Said Spinelle recently to Mic, “I think of pin up as a strong, radical genre. The first women I met who dressed in a pinup style were smart, self-possessed and politically aware, and I'm sure that's influenced by perception of the genre.” She added, “Femininity and competence aren't mutually exclusive, but you'd be surprised how many people need a lesson in that.”

And you know what? I can't think of a better medium in which to teach that lesson than in pin up photography. It's an example of something old being given new relevance by changing with the times. As Shameless photographer Carey Lynne put it, “Old pin up was lacking in body and race diversity. Today women of all sizes, races and abilities are embracing their femininity by… becoming their own pin ups.”

Shameless is also a deeply personal project for Spinelle. In an interview with BUST magazine, she spoke of how her mother fought to break the cycle of negative body image. “[My mother] always told me I was beautiful,” Spinelle said. “And not just that I was beautiful now, at a certain moment, at a particular size and shape — but that I had always been, and would always be, beautiful.” It took Spinelle some time to internalize this perspective; “I didn't believe her, of course,” she noted, observing that “our culture scrutinizes women's bodies, and I scrutinized my own.” But, she said, “when I began to emerge from that self-hatred, I realized that I was longing to do a photo shoot — to model in one — in a safe and supportive space. I started Shameless because I wanted something like this to exist; I needed it just as much as it turned out other people did.”

And we do need it, even if we don't model for it ourselves. Just having these images available for to see, for them to be so visible, their boldness writ large and their claim on the world and themselves staked, is hugely empowering. My favorite thing about the photos? Each woman's personality shines brightly through. The pin up style enhances what's already there, rather than drawing over it, hiding it, or replacing it with something else.

And while we're on the topic, all the photographs that are displayed for the public (including the ones seen here) have the “explicit and enthusiastic consent” of the models who star in them. Said Spinelle, “Every person should get to decide whether their images are for their eyes only, or whether it would be empowering for the world to see and admire them.” The power is left entirely in each individual woman's hands — something of which I can't stress the importance enough.

Check out more of Shameless Photography's work over at their website, and connect with the studio on Facebook and Instagram (@shamelesspinup). You might even think about booking a session for yourself. Not going to lie: I definitely am. They're pricey, but something tells me it'll be so, so worth it.