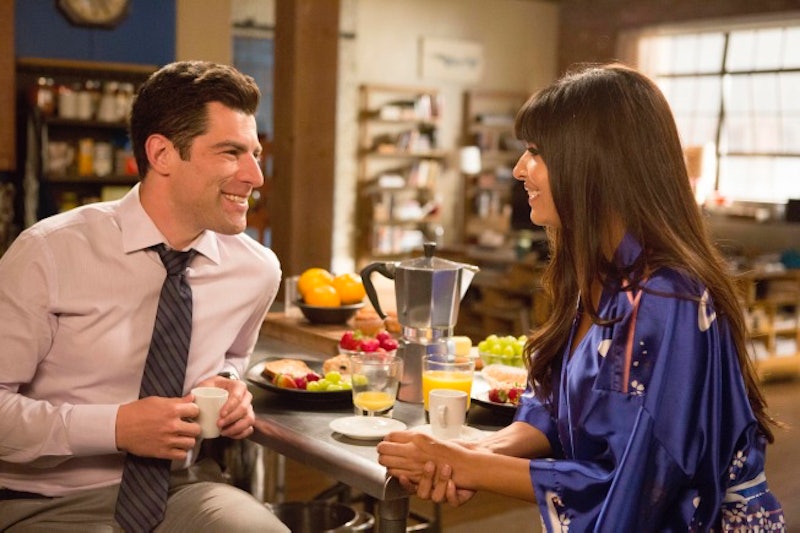 When I first started watching New Girl, I loved Schmidt. I thought Max Greenfield deserved the 2011 Primetime Emmy more than anybody, especially Modern Family's repeat-winner Eric Stonestreet. He brought life to the show, balancing obnoxiousness and immaturity with charming naïveté and heart to create a character that seemed new, fresh, and delightfully unexpected. I bought into his unrequited feelings for Cece, sympathized with his obsession with hair gel, forgave his initial mean-spiritedness and selfishness towards Elizabeth in the second season, and even looked past his occasionally revolting vanity.

But my devotion has gotten me nowhere. Now that Nick and Winston have matured into three-dimensional, relatable characters with evolving aspirations, hang-ups, and personalities, Schmidt has become totally static. Think about it. Nick went from being a grumpy bartender too emotionally stunted to express himself to a somewhat less grumpy bartender in a healthy relationship where he voluntarily communicates his feelings. Similarly, Winston went from being a cocky former Latvian basketball player with, let's be honest, a bit part intended primarily for comedic relief, to a self-possessed, vulnerable radio host who stands up to his cheating girlfriend, begins a much better relationship with a gorgeous cat named Ferguson, and is a bona fide New Girl star.

My heartbreak comes from the fact that he was on the path to change for two full seasons before this upsetting backslide. In Season 1, he revealed that under his douchey exterior was a sensitive human being capable of feeling deeply for another person (i.e. Cece). When he lost Cece, yes, he proceeded to pout and engage in crazy hijinks throughout Season 2. But then he grew. In his quest to make Cece jealous at her own wedding, he tracked down his plus-sized former girlfriend, Elizabeth. Yes, he was a shallow jerk to her at first, but then he recognized his general awfulness and started dating her. They were an awesome couple, Schmidt stopped seeming so superficial and vain, and there was peace in the world.

Then, Cece's wedding fell through, and she wanted Schmidt back. This could have been a turning point for the character. By choosing Cece, he would have to deal with the messy feelings behind their first breakup, including the pregnancy issue; by choosing Elizabeth, he would openly defy society's (and his own) narrow beauty standards. Instead, he chose both, became a gross, reprehensible cheater, and reverted to his Season 1 self.

What's worse, now that Schmidt's been discovered by both Cece and Elizabeth as the big cheater he is, he's not doing any soul-searching or expressing contrition. Actually, he's actively trying to come between Nick and Jess, who after a shitshow of a courtship process are finally happy. Why? Because instead of blaming himself for the loss of both Elizabeth and Cece like a normal mature adult, he blames his two best friends. The preview for the episode suggests one of the reasons for this reaction is comedic effect. Oh, what will Schmidt do now? That crazy character!

Look, I'm not saying I want him to put on a pair of stick-in-the mud pants and stop being this person:

I'm just saying for New Girl to stay interesting and watchable, he needs to stop being such a static bozo, own up to his actions, and mature once and for all. That doesn't mean he has to stop being funny, or even stop being a man-child (Nick Miller, everybody). It just means the writer's room must get it together and put the time and energy into this character they once did.