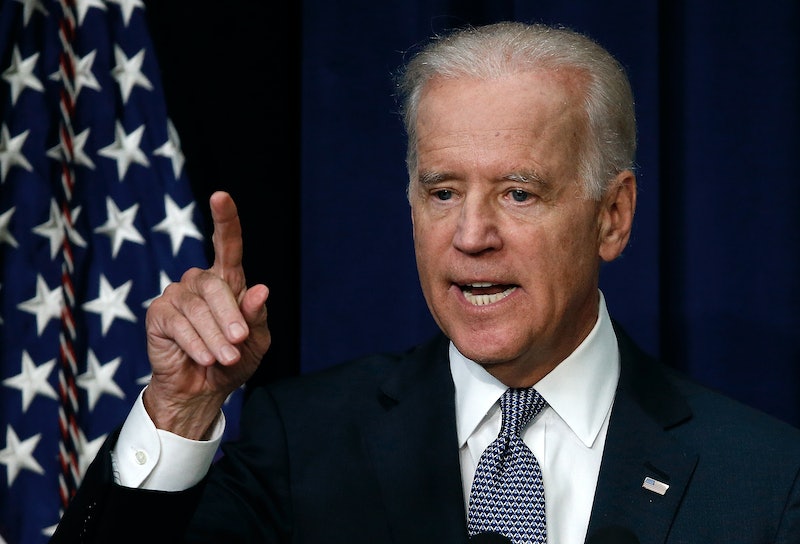 Joe Biden, the man at times more akin to an awkward uncle than a vice president, said this week that he will decide whether he will mount a campaign for the White House by the "end of the summer." If Biden chooses to vie for the presidency, then he'd be forced to develop a platform for his campaign, which might end up looking similar to what President Obama twice ran on — but Biden's experience as second-in-command might leave him more cautious in what he unveils as a platform.

Recent comments by Biden at Drake University reveal that he would likely stand close to the Obama administration.

These comments are telling. We know that if he runs, he won't be shy about his close association with the administration. But we also should take note of the phrase "have done" — effectively, what has worked. So what platforms might this indicate for Biden 2016? And how might they be different from what Obama ran on in 2008 and 2012?

As a candidate, Obama advocated for closing Guantanamo Bay. That never panned out, and the president has taken the flack. The population at Guantanamo has been reduced, but a full closure appears far off.

Biden says he'd run on what has been done, and in the case of the military prison, that isn't much. So he might be more careful in making promises that are more feasible, and not addressing the controversial military site.

Perhaps the starkest difference between the platforms would be education. During the 2012 campaign, Obama's campaign website did not even include "education" as an issue.

Biden and his wife Jill, a community college professor, have both heavily promoted Obama's plan for free community college. A Biden campaign might have a much stronger focus on affordability of higher education.

This one ties into education. If Biden seeks addition education reforms to expand the federal department, he will require tax revenue to do it. Obama ran on “asking the wealthiest and corporations to pay their fair share.” Biden might attempt to riddle critics by using education as the basis for levying tax increases.

During his appearance at Drake University, Biden later added:

Some say that would amount to a third term of the president. I call it sticking with what works.

Biden's platform may not necessarily exactly mirror the platforms of Obama, but he will certainly take into account what policies he thinks has worked and further develop those ideas into a campaign strategy.