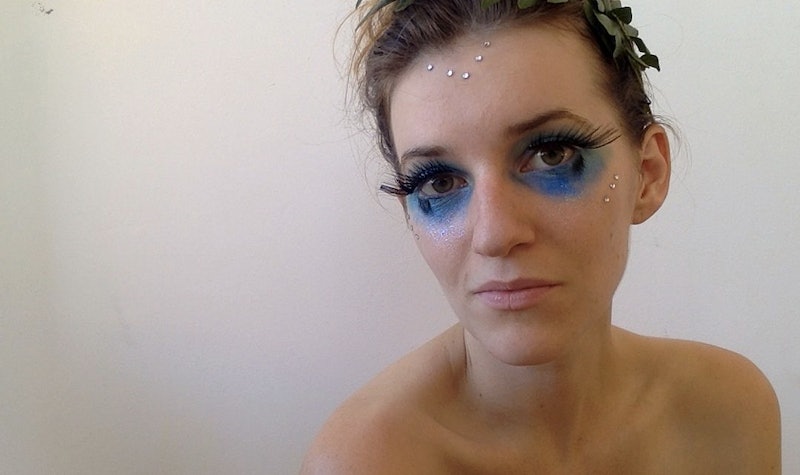 Happy (month of) Halloween, readers, and if you're anything like the rest of our spook-obsessed society, you're probably already planning your costume, scouring thrift stores, and despairing over the perfect zombie "wounds" and incredible vampire "blood" that makeup artists recreate so effortlessly. Thankfully, you've got me: Your guinea pig for the week. Today, I put honey in my eye for you. Tomorrow, who knows? Maybe I'll wrestle a skeleton, just to learn its secrets.

Confession: I'm not good at doing makeup. I have one brush that I never clean, I have no idea how to contour, and I couldn't tell you the first thing about illuminating creams, except that apparently they make you look like Barbie. I'm just a normal girl, standing in front of the computer, asking you to not judge me, because I'll be attempting to create five different costume looks this week, just to show it can be done. Consider this your idiot-proof guide to Halloween makeup: If I can successfully deal with fake blood and glitter, you definitely can, too.

First up: A fairy. Everyone wants to be a fairy, right? They're gorgeous, they can do magic, they can fly, they're in every Disney movie, they can be evil, they can be good, they wear a lot of glitter in their hair, and they often have green eyes (check) and are known to bite when irate (check!).

I was going to use a video tutorial, but then I watched this video and wanted to die (please just listen to the voice), so I did what any normal girl would do and started a Pinterest board for inspiration. Check it out!

I picked my favorite elements from the board (the dreamy colored eye, the glitter on the cheekbones, the flowers in hair) and began to DIY my face off — or on, to be specific:

1. Using light, sparkly teal eyeshadow (typing out that sentence made me feel about five years old) and my one makeup brush, I drew a huge, vaguely cat-eyed shape around each eye, stopping about a millimeter from the brow.

2. Then, with this horrible "grease" makeup I got out of a $7.99 Halloween makeup kit from Walgreens (it includes a vat of something called simply "Creepy Skin"), I dabbed a darker blue all around my eyes, using my finger to get a sort of imperfect, cloud-like shape.

It's so sad being a partially-completed fairy!

3. Next up: Major glitter on the cheekbones, inspired by this amazing picture. None on the eyes, because that's cliché. Also, some nude lipstick, because while fairies aren't undead, they're not exactly alive, either.

4. Now it's time for the best part —applying rhinestones to your face! Again, I avoided traditional placement (if there is such a thing as "traditional rhinestone face placement") because this fairy is indie as folk(lore).

One last partial smile before my eyes began to sting like crazy.

Fairies only read creepy vintage books (this one is called Synchronicity: Science, Myth, and the Trickster).

5. Even more fun stuff: This is the point when you get your hair did (I bobby-pinned some tree branches into mine: Insta-woodland fairy!) and put on some false eyelashes, aka the patriarchy's way of trying to blind womankind once and for all. OUCH! I may or may not have stuck mine on with honey, figuring that if it got in my eyes, at least it wouldn't be as poisonous as adhesive.

Go ahead, play around with indulgent props, because you're a fairy now! Human social obligation simply do not apply.

Dreaming of being mortal.

More like this
M.A.C. Is Launching An ’80s-Chic Stranger Things Makeup Collection
By Olivia Rose Ferreiro
Madelaine Petsch's Beauty Routine Is All About Carving Out "Me-Time"
By Olivia Rose Ferreiro
10 Talc-Free Makeup Brands For Safer Eyeshadows, Powders, & More
By Audrey Noble
Alicia Keys’ Keys Soulcare *Finally* Launches Makeup
By Tomi Otekunrin
Get Even More From Bustle — Sign Up For The Newsletter