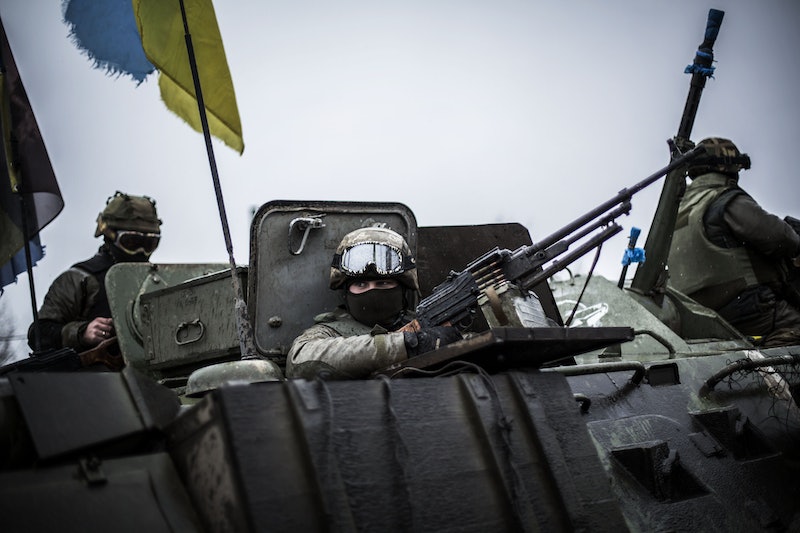 Even after a new peace deal was brokered Sunday, in which both sides agreed to a ceasefire, fighting raged on in Ukraine on Friday, killing 11 Ukrainian soldiers and leaving 40 more injured in the past 24 hours — proving that the 16 hours-long Minsk talks the day before involving a frantic Germany and France, as well as Russia and Ukraine, was far from a solution to the conflict over the future of the territory.

The most intense fighting took place in Debaltseve, a strategic railway hub and the center of recent battles, where pro-Russian separatists and Ukrainian forces agreed on a humanitarian truce last week to allow civilians to evacuate. Both sides accused each other of killing civilians, reported Reuters.

Due to start at midnight on Sunday, the new ceasefire deal involves the withdrawal of heavy weaponry from the front line and border control, reported The Guardian. The earlier 12-point Minsk Protocols, signed in September last year, crumbled after heavy fighting in eastern Ukraine broke out, and the new deal includes the implementation of many of the points. But indicative of the deal's poor success rate, one rebel told Reuters:

What sort of ceasefire? Don’t make me laugh. This is already the second or third ceasefire.

According to BBC, the group in charge of overseeing the ceasefire said that there was "quite serious live fire" in a few areas. European leaders have cautioned Russian President Vladimir Putin — who has been accused of arming the rebels — that they will impose further sanctions if the new peace deal isn't respected.

Although Germany Chancellor Angela Merkel said, following the announcement of the new peace deal, that there was a "glimmer of hope," the situation remains bleak. Ukrainian President Petro Poroshenko conceded that none of the leaders involved in the new peace deal acknowledged a "solid conviction" on either side of the fighting to uphold the bargain. He told reporters frankly:

I don’t want anyone to have any illusions or for me to seem like a naive person. We are still far from peace and no one has any solid conviction that the peace conditions agreed in Minsk will be fulfilled firmly.

More than 5,000 people have died since the Ukraine conflict began last year, thought UN officials have expressed concern that the actual death toll may be "considerably higher." Germany and Russia's latest, urgent push for the new cease-ire came amid the Obama administration's refusal to rule out sending weapons to arm Ukrainian soldiers — though it agreed to hold off on making a decision for now — in the fear that it might further escalate the fighting. But a diplomatic solution, a mere day after its conception, has thus far proved less than effective.