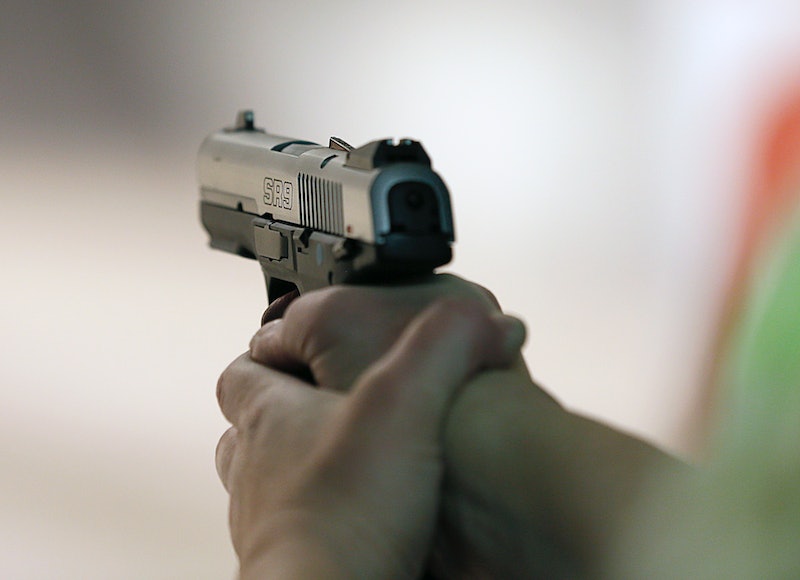 What is this, Fidel Castro's Cuba? Nope, it's the U.S. state of Wyoming. On Thursday, the Wyoming House passed a bill approving firing squads as an alternative form of execution. The bill was first considered last year when chemicals used in lethal injections, which is the state's main form of execution, became increasingly difficult to obtain in the country. Now the bill for firing squads is awaiting a crucial vote before it can advance to Gov. Matt Mead for his approval.

Needless to say, some lawmakers are not on board with a form of capital punishment that dates back to days of the guillotine.

On Thursday, Senate File 13 passed the Wyoming House of Representatives 32-28 after an amendment was made on Tuesday that required death row inmates to be administered anesthesia and made unconscious before being fired upon. Because of this new stipulation, the bill needed to be voted on again, and now awaits the Senate's decision, which will be made next week.

In order to offer a solution to the limited supply of lethal injection chemicals, which was a result of manufacturers in the anti-death-penalty EU refusing to export chemicals to the states, the Joint Judiciary Interim Committee began drafting SF 13 last May. At that time, the state had completely run out of the chemicals needed for execution, according to Bob Lampert, director of the Wyoming Department of Corrections, who testified before the committee.

In the event that we had an execution scheduled and we couldn't carry it out as a result of lack of substances, I suggested to the Joint Judiciary that we may want to consider having an alternate means of execution, such as the firing squad.

Currently, Wyoming does have an alternative method of execution — lethal gas — but the bill was proposed regardless because the state does not have a working gas chamber. It's also opposed by some Wyoming legislators.

One of the reasons I chose firing squad as opposed to any other form of execution is because frankly it's one of the cheapest for the state. The expense of building a gas chamber I think would be prohibitive when you consider how many people would be executed by it, and even the cost of gallows.

Plus, Burns considers the gas chamber to be "cruel and unusual." While it's true that the firing squad is widely considered to be one of the most quick and humane forms of execution, that's only if it's done precisely.

According to Wyoming's Casper Star Tribune, Representative Ken Esquibel, D-Cheyenne, pointed out that "there is (a higher) margin of error in this method of execution than others."

Representative Stephen Watt, R-Rock Springs, has also expressed his opposition to the bill, and can speak from firsthand experience that being shot may not be the most humane solution. Watt, who lost an eye when he was shot by a suspected armed robber in the 1980s, told the committee:

I’ve been shot. And I don’t care how quickly death comes from firing squad. It still hurts, and it’s still terrifying. And I think it’s cruel and unusual.

There's a reason why the description "cruel and unusual" has come up multiple times when discussing alternative forms of execution. In this day and age, the concepts of death by firing squad and gas chamber both feel incredibly antiquated and crude, but perhaps only further bolster the idea that capital punishment is far from a perfect system.

But despite how outdated a firing squad feels, it is set to be introduced in Wyoming. In addition, both Utah and Oklahoma can use firing squads if their main forms of execution are deemed unconstitutional. The last person to be executed by firing squad in Utah was in 2010. Images: Wikimedia Commons (3)