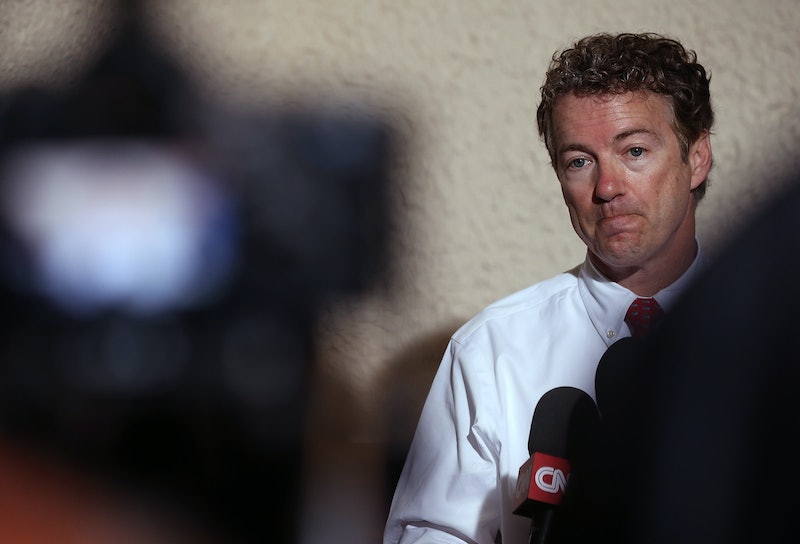 Uh-oh. Rand Paul is in hot water over the revelation that, as it turns out, Paul lied about having a bachelor's degree. The Washington Post fact-checked some of the senator's comments, and concluded that, despite having a medical degree from Duke University, Paul has seriously misled the public about his undergraduate history.

First off, let's examine a conversation between TechCrunch founder Michael Arrington and the senator, printed by The Post:

ARRINGTON: Let’s talk about economics because maybe you can actually explain this to me. I have an econ degree which means I know just enough not to understand any of what our government is [inaudible]…

PAUL: Mine’s in biology and English so this is going to be a great conversation.

No, not quite. Paul may have a medical degree from an Ivy League equivalent school, but he certainly doesn't have an undergraduate degree, let alone two. If there's any doubt about what he said, the two later talked about Bitcoin and Paul said: "I have a biology degree." Right.

So, here are the facts. Paul studied at Baylor University for three years, but never graduated. He then attended Duke University Medical School where he did earn a degree. Leaving us with the question: how did he get in? Well, at that time, Duke did not require applicants to have an undergraduate degree.

How much not having a bachelor's degree matters is a hot issue at present: possible presidential nominee Scott Walker is facing criticism that he left college during his final semester. Meanwhile, Paul — another possible 2016 nominee — completed less than that. The problem with Paul isn't that he lacks an undergraduate degree, but that he lied about having one.

While in college, Dr. Paul did study biology and English. He has no college degree and has a medical degree.

Darling later emailed an extended response to The Washington Post, explaining his logic that the senator was not, actually, lying.

[An] M.D. Degree is the study of biomedical sciences according to the Duke University School of Medicine. In other words, a M.D. is a biology degree. Merriam-Webster defines biology as ‘a branch of knowledge that deals with living organisms and vital processes.’ Dr. Paul never said he had an undergraduate degree in biology, and it is accurate for him to say that he has a biology degree. You are making inferences from his statement that are unwarranted. It is common knowledge that the study of medicine is the study of human biology, and a MD has a doctorate degree in one area of study of the science of biology.

OK. Even if that's why Paul said he has a "biology" degree, that still doesn't explain the part about him also holding one in English. This senator has told too many lies to explain away in one day.