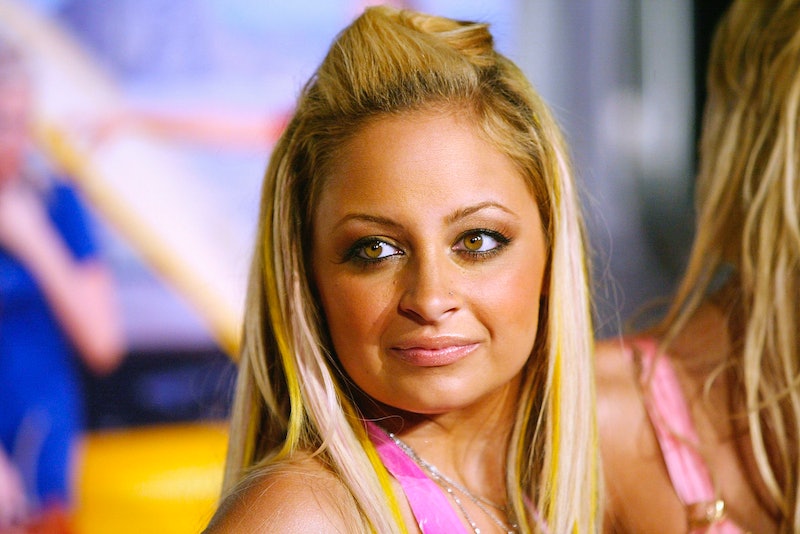 Let's just be honest here. We've all made some regrettable fashion decisions at some point in our lives. But hopefully, if we're anything like Nicole Richie, we'll all be able to laugh at ourselves one day. The former reality star definitely had some questionable fashion choices, but luckily she has a sense of humor about it these days. Nicole Richie sat down with Refinery 29 to discuss her early 2000s fashion choices, which got me thinking about how we could update those looks for the modern era.

For the most of us in the millennial generation, Richie included, the majority of our poor fashion choices occurred within the years of the early 2000's — the era of itty bitty baby tees, Von Dutch trucker hats, Juicy Couture velour track suits, and pleated denim mini skirts. That was a particularly dark, confusing time in my life when I thought graphic tees made me witty and that platform flip flops were the epitome of causal sexy. Yeahhh not so much... Thankfully, the social media age had not fully descended upon the world yet, so the majority of photographic evidence of my shame remains buried. Celebrities from that period, however, were not as lucky.

With all of their fashion faux pas immortalized forever on the Internet, celebs might try and fail to forget the age of the sequin mesh bag and furry boots. Nicole Richie on the other hand, is proud of her glittery, tiny tee past. She may be a chic and sophisticated designer these days but a few years ago, the former party girl was embracing those 2000's trends with the best of them. And, amazingly, has no shame. The Candidly Nicole star recently opened up to Refinery 29 about her fashion choices of yesteryear and has a surprisingly good attitude about it.

There's never a moment where you're gonna look back at yourself and not, at some point, say, 'What was I thinking?' As much as I would never wear this outfit now, fashion and how you express yourself is just in the moment.

Nicole couldn't be more right! Butterfly hairclips and Baby Phat made me feel good in the moment, so what's wrong with that? That should be celebrated! While the rhinestone overload trend may have died before 2009 and my old middle school pics might make me scream 'What was I thinking?!,' that doesn't dull my love of sparkle, bright colors, and minis. They just need a bit of a 2015 update! Check out more of Richie's thoughts on her fashion past and how to modernize those early 2000's pieces you still have hanging in your closet (from WTFs to OMGs).

"I was definitely going through a pop star phase," Richie told Refinery 29 "My ‘I love Britney and Christina' days."

The early 2000's mini was flippy and fun, but the modernized mini can be just as flirty. By turning up the structure and volume you can easily add sophistication, like with this tulip-like number from ASOS. Less childlish, but just as much as fun to twirl around in!

"However you wanna do it right then, that's how you have to do it — not worry about in 10 years if you're gonna look back and be totally embarrassed, because you're always gonna be embarrassed," Richie said.

While I want Nicole's easy-breezy attitude, she can keep her 2003 all denim ensemble. Today's denim on denim is anything but monochromatic. Break up the pieces by using denim in different tones and soften the look with a chambray shirt (aka avoid going topless under a denim jacket like my girl Nicole).

"I think I was just really into being like sassy," Richie told Refinery about this particular look.

The asymmetry of yesteryear was flowy and choppy, resulting in a sloppy silhouette that could make you look shorter and clunky. Asymmetrical pieces nowadays are more tailored and fitted, like this wrap dress from MissGuidedUS.

"It is really interesting to see how denim has kind of evolved and changed over the years. That was my cut back in the day, and flare jeans are something that I hardly wear now," Richie said.

Time to dust off those 2004 jeans, Nicole, because the flare is back! All trends eventually make a comeback and the '70's-inspired denim flare has been making the rounds on the runways. My middle school self is squealing. Will we be cringing when we look back on our 2015 pics 10 years down the line? Probably. But that has never stopped Nicole from expressing her fabulous self in the moment, so why should it stop any of us?