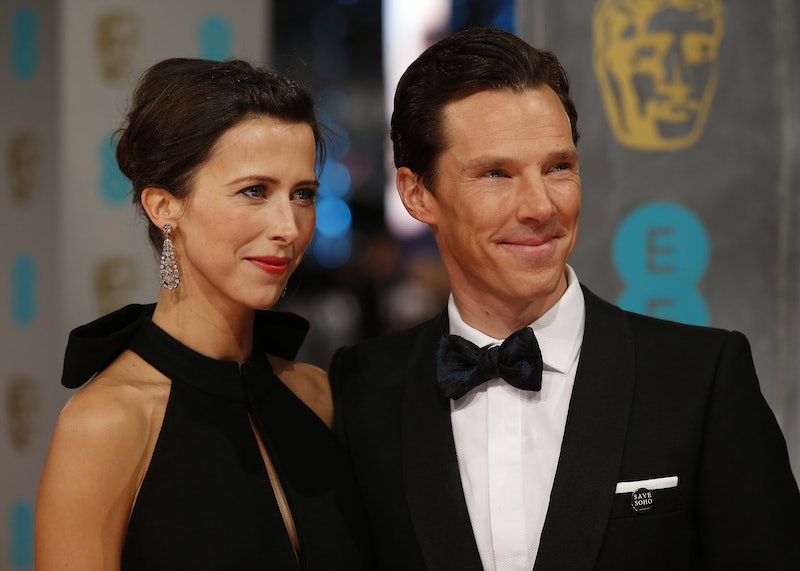 To quote the wise Ron Burgundy: "Well that escalated quickly." After getting engaged on Nov. 5, announcing that they were expecting a baby on Jan. 7, and a report only coming out on Friday that this was even happening, according to People, Benedict Cumberbatch and Sophie Hunter got married on Saturday, February 14. Yep, Valentine's Day. As if these two hadn't already melted all of our cold, dark hearts with their old time-y engagement announcements, they went and got married on the day of love. And most shocking of all, with them, that doesn't even seem cheesy.

News first broke that the couple would wed on Feb. 14 in an Us Weekly report which explained the couple would get married on The Isle of Wight in England. In addition to this, The Daily Mail reported that the wedding would be on a "spectacular period property" and would consist of mainly friends and family. Honestly, I would expect nothing less from a person named Benedict Cumberbatch.

According to People's report, Cumberbatch and Hunter wed exactly like the rumors predicted: That "spectacular period property" turned out to be the St. Peter and St. Paul's Church in Mottistone, Isle of Wight, England, and the reception was held at the historic Mottistone Manor nearby. Yes, both look positively breathtaking, in case you were wondering:

The wedding was reportedly "low-key," which sounds pretty perfect for the couple.