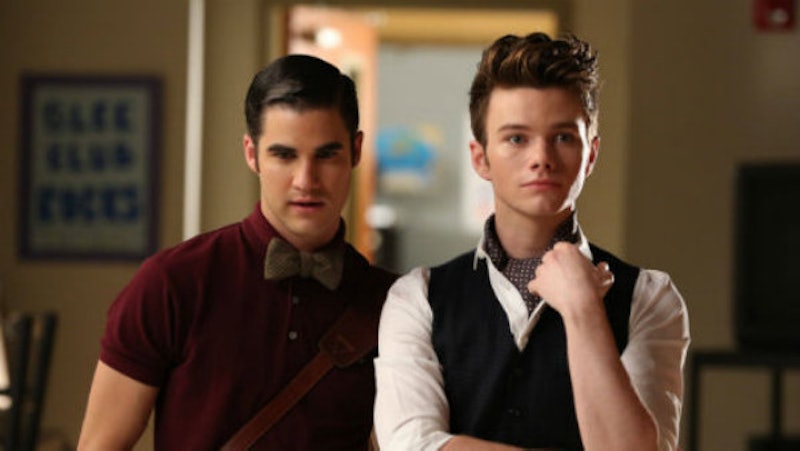 Why must this nonsense continue? Ryan Murphy, Ian Brennan and Brad Falchuk are terrible, horrible teases. On Glee's Season 6 episode "Transitioning," Kurt and Blaine almost had the chance to get back together, and everything was ruined in one short scene. We've all known that there's been a ticking clock on the relationship between Blaine and Dave Karofsky, and I don't think that many Klaine fans really even took Kurt's relationship with the older (yet still pretty attractive) Walter seriously. But apparently Kurt is more willing to try and make things with Walter work out. Because despite Klaine sharing a kiss and a romantic scene/duet, Kurt stayed with Walter and didn't attempt to talk to Blaine after their encounter. By now most non-Klaine fans even want the two to get back together, especially since Karofsky told Blaine that he knew Blaine was always still in love with Kurt. So when will we all get to see a Blaine/Kurt reunion?

There's no doubt in my mind that Murphy, Brennan and Falchuk are going to get Klaine back together. If they didn't there would literally be musical rioting in the streets (because that's how us Glee fans like to fight, duh). But how long are they going to make us wait?

Let's set the stage for the kiss, shall we? During a New Directions lesson about transitioning (thanks to Rachel's freakout that her dads sold her childhood home), Artie created a wheel of duets to help people choose at random with whom they'd sing a duet. During Kurt's turn, he purposely turned the dial so that it would land on Blaine. Blaine was obviously pleased about the duet but worried about telling Karofsky about it, thanks to him thinking Klaine still had lingering feelings for each other. That Karofsky is a smart guy. Blaine gives Kurt the awkward hug from above and runs off.

But the former couple duets it up big time with a great song at the last party in Rachel's house, and they sound great together. After the song is over however, the two reminisce about their times singing together and being with each other. And when Kurt explains how funny it is that people can mean so much to you at one point in your life and you barely think of them at another point, Blaine plants a wonderful kiss on him to his absolute surprise.

Here's the only thing that sucks about the kiss: Blaine did it while he was still dating Karofsky. I know that Blaine and Kurt stopped kissing rather quickly and Blaine walked away, supposedly he even stopped talking to Kurt for a few days because of the surprise lip lock as Karofsky later says Blaine had been acting weird since the party. I just wish the couple had broken up so that Blaine wouldn't have the bad feeling of cheating in a relationship yet again.

Nevertheless, Blaine tells Karofsky and the two break up relatively amicably because Karofsky sees his love for Kurt, and Blaine immediately runs over to McKinley to confront his one true love. Unfortunately Kurt is still with Walter and is even going on a double date with Rachel and Sam. So first thing that needs to happen is that Blaine needs to tell Kurt how he feels and that he's broken up with Karofsky, even if Kurt is with Walter. Then the ball is in Kurt's court about how to move forward.

It's nice that Kurt wouldn't immediately go and break up with Walter just because Blaine kissed him because until he knows for sure that Blaine wants to actually be with Kurt and still loves him, there's no point in ending a potentially fun romance with Walter, who's actually a pretty cool man. Still, I predict that by the end of next week's episode, which features Santana and Brittany's wedding, we'll see a Klaine reunion. Because with only 5 episodes left in the sixth and final season, there's only so much hesitation and waiting fans and the Glee writers can do. Let's get things moving folks! It's time to head to the finish line.