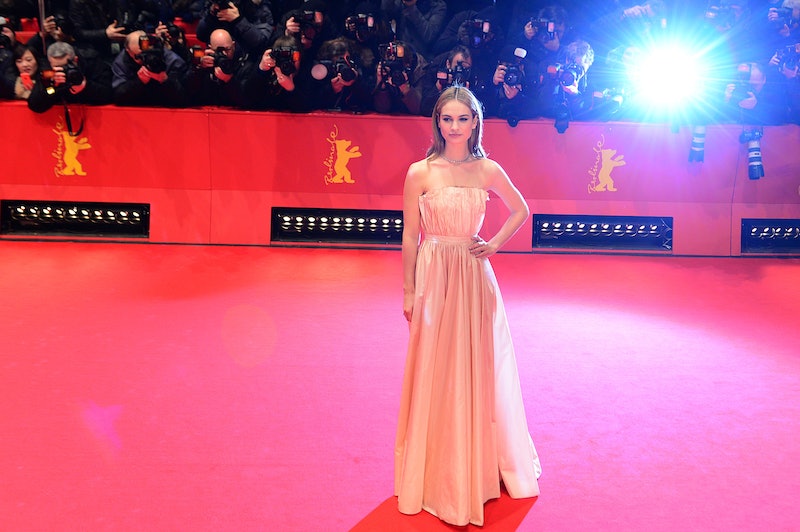 The thought of Cinderella immediately conjures visions of her blue dress, which was a perfect fit for the ball, in every way. But, that’s because you haven’t seen Lily James at the Berlin Film Festival premiere of the live-action Cinderella movie. Her Dior gown proves that a pink dress would have suited the princess just fine!

And if anyone was ever doubting the ability imagine James as anything other than a Downton Abbey star, fear no more! Lily James’ fairy godmother (okay, stylist) has transformed her into Cinderella right before our very eyes — and we haven’t even seen the movie, yet! Although, from the looks of the trailer, it's going to be every bit as magical as one would expect. Less than a month to go, people!

James practically floated down the red carpet, looking as elegant as any princess should in her pink Dior gown. Unlike her on-screen counterpart, James did not have the help of any bird or mice friends when going down the red carpet. Instead, Cate Blanchett acted as a stand-in and dropped the Wicked Stepmother act to help James with her train. How’s that for a Cinderella moment?

James’ soft hair and make-up and simple De Beers diamond necklace helped to highlight the lovely silhouette of the dress and were just the perfect touches for finishing the look.

No Cinderella-esque ensemble would be complete without a pair of glass slippers, of course. James did not disappoint in that department, either! Wearing Jimmy Choo Swarovski-encrusted heels, she served the right amount of modern day princess vibes.

All that’s missing is the horse drawn carriage and the Prince. Guess I’ll have to wait for the movie for that, but until then, I’ll just be here staring at Lily James’ perfectly pink dress!