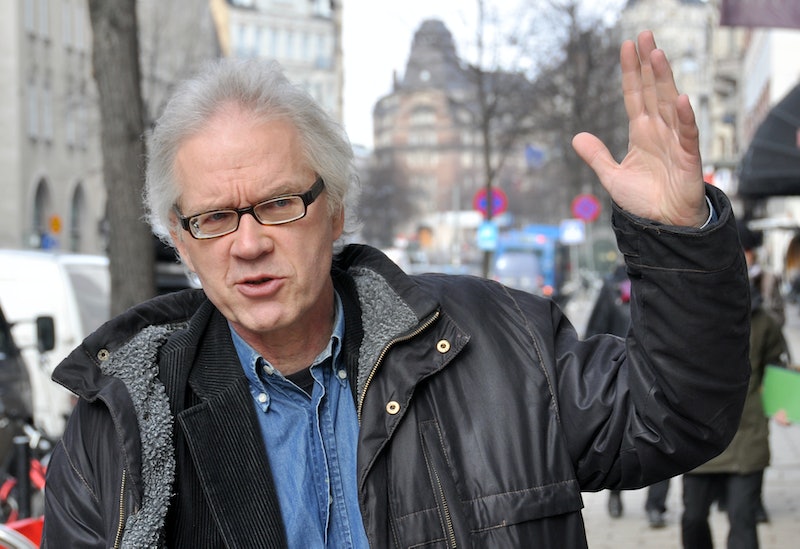 As megaphones and mouthpieces for a number of causes, the life of a journalist is one that is fraught with both incredible danger and seemingly intangible reward. But lately, the former has been on the forefront of the international psyche, as terrorist groups like ISIS have continuously attacked reporters, photojournalists and journalists in their extreme acts of violence. Last month's attacks on Paris' Charlie Hebdo offices and Saturday's shootings in Copenhagen, which are thought to have targeted Lars Vilks, a famed and infamous cartoonist, have only served to emphasize the risks inherent to a journalist's career. But while journalists dedicate their lives to telling others' stories, it is infrequent that the spotlight is turned upon them — so who is Lars Vilks, the incendiary and controversial cartoonist who (once again) narrowly avoided death at the Krudttønden cafe on Saturday?

Born on June 20 in 1946 in Helsingborg, Sweden, Vilks is, first and foremost, an artist. In 1987, he graduated with a Ph.D. in art history from Lund University, and continued to the Oslo National Academy of the Arts, where he worked until 1993. He also taught art theory at the Bergen National Academy of the Arts for a number of years, but until recently, was most famed for his creation of sculpture. In 1996, he determined that the site of his two wooden pieces, Nimis and Arx, was to be an independent country he called Ladonia.

But none of this attention compared to the public outrage he invited with the publication of one, very particular cartoon. For the last eight years, Vilks has been the center of considerable negative attention following the publication of his 2007 drawing depicting the Prophet Mohammed as a dog in local Swedish newspaper, Nerikes Allehanda. The piece, which was declined for show by numerous art galleries who cited security concerns, was reminiscent of a similar series of cartoons published by Jyllands-Posten in 2005, which prompted a massive outcry throughout the Muslim world for its caricatures of the prophet. Vilks' cartoon was unilaterally condemned by much of the Middle East — at the time, the Egyptian ministry released a statement saying, "Such an irresponsible act is not conducive to friendly ties between the Islamic world and the West." Jordan government spokesman Nasser Jawdeh expressed similar sentiments, telling reporters, "The publication of this cartoon, which seeks to attack the character of the Prophet Muhammad, is unacceptable, rejected and condemned."

Vilks' work was similarly lambasted by the governments of Iran, Pakistan, and Afghanistan, each of whom released strong statements of their own, in addition to a joint protest orchestrated by the Organization of the Islamic Conference, a group representing 57 nations. The hand-drawn sketch quickly became an international point of contention, and after the August publication of the cartoon, then-Swedish Prime Minister Fredrik Reinfeldt met with the ambassadors of 22 different Muslim countries in attempts to ease tensions and diffuse the spark Vilks undeniably lit.

Reinfeldt told reporters, "We are eager to ensure that Sweden remains a country in which Muslims and Christians ... can live side by side in a spirit of mutual respect," but added that Sweden held freedom of expression in the highest esteem. Said Reinfeldt, "We are also eager to stand up for freedom of expression, which is enshrined in the constitution ... which ensures that we do not make political decisions about what gets published in newspapers."

Despite Sweden's attempts at appeasing offended parties, many fell upon deaf ears. Soon after Vilks emerged in an infamous spotlight, terrorist organization Al Qaeda issued a $100,000 bounty for the artist's murder. An additional $50,000, claimed the Internet broadcast, would be offered if the cartoonist were "slaughtered like a lamb."

Al Qaeda was not the only organization invested in his demise, however. Vilks himself began to receive numerous death threats following the emergence of the cartoon, and became the victim of a number of assassination plots. In 2009, Colleen LaRose, a Pennsylvania native who took on the name "Jihad Jane," conspired with two other American citizens to murder the artist. LaRose managed to make her way to Sweden, but her plan was foiled soon thereafter, and in 2014, she was sentenced to 10 years in prison for her role in the scheme.

While the scheme proved unsuccessful, it clearly outlined the need for a more robust security detail. That same year, two brothers were arrested for arson after their personal effects were found near his house following a Molotov cocktail attack. Seven people were also arrested in Ireland for plotting Vilks' murder, and the artist was attacked while giving a speech at Sweden's Uppsala University. In 2011, another four men were arrested for attempted murder at an art fair in Gothenburg, but the charges were later dropped.

Since 2010, Vilks has lived under constant surveillance and protection from the Swedish police. The failed 2010 terrorist plot in Stockholm, which ultimately injured two and killed the bomber, cited Vilks' drawing as motivation for the attack. In emails received just 10 minutes before the explosions, the sender declared in an audio message, "Our actions will speak for themselves. As long as you don't end your war against Islam and the humiliation against the prophet and with your stupid support to Lars Vilks the pig."

Vilks is no stranger to the infamy and its associated violence. As a close friend of fellow cartoonist (and apparent instigator) Kurt Westergaard, who received similar negative attention for his 2005 drawings of Mohammed with a bomb in his turban, both men are only too familiar with the physical and verbal abuse such works incite. But this has only spurred their devotion to the craft. Two years ago, Helle Merete Brix founded the Lars Vilks Committee, dedicated to the freedom of expression and the press. In 2014, the freedom prize from the committee was awarded to Stéphane Charbonnier, the editor-in-chief of Charlie Hebdo, who was killed in January's attacks on the Paris office.

Still, Vilks and artists and journalists like him will not put down their pens. Said Vilks, "The problem is that we already have a very high level of censorship when it comes to Islam and religion and things like that. There have been a few magazines that have tried to keep going as normal and Charlie Hebdo was one of the few." Following the January shootings, Vilks told The Wall Street Journal,

Almost the entire Muslim world is subject to a theological rule that has a strange outcome when it comes to human rights. You can’t ignore that. Then you’re talking tactics, how should one go about to change that. Some say, you should be very careful, but that’s just postponing the problem. Sooner or later you have to explain what you’re criticizing.

So Al Qaeda's most wanted or not, it seems as though Vilks will remain a prominent figure on the radical art scene for years to come.