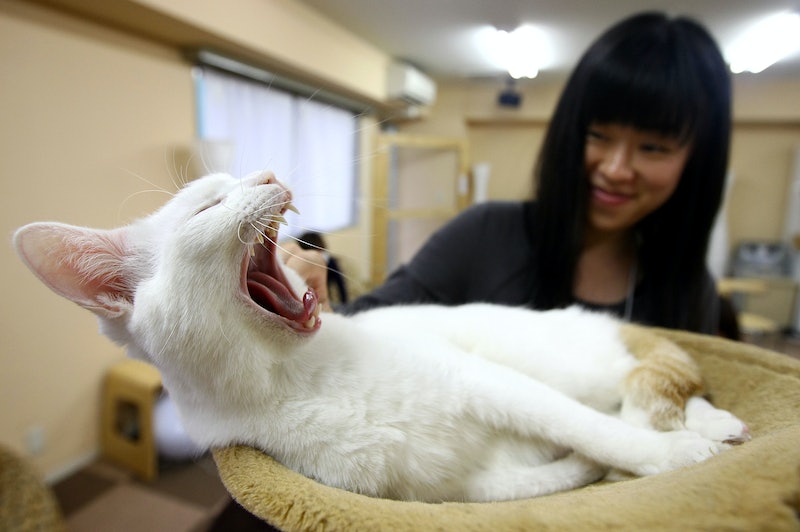 You've probably noticed that after you go out, your diet the next day is a nutritionist's worst nightmare. But as it turns out, that's not because you're somehow still a little tipsy from that fourth vodka tonic (although that might have something to do with it); according to recent research, sleep deprivation could be messing with your eating habits. It's not exactly an eat-ALL-the-ice-cream, get-out-of-jail-free card, but it does at least explain why you can't seem to stop craving hamburgers.The study was published in Scientific Reports last month, Cosmopolitan reports. Out of the 46 male participants, 34 were kept awake for three days, while the remaining 12 maintained regular sleeping habits, and they were all given daily MRIs to see how this affected their brain activity. Meanwhile, their eating habits were also monitored, and the results were pretty striking: sleep-deprived participants ate an average of 1,000 extra calories at night, without eating less during the day to make up for it. That's not the craziest part, however; researchers also noticed that they ate different kinds of food overall, consuming more fat and fewer carbs. Considering people's sleeping habits in college, it's really no wonder that McDonald's drive-through workers know most university students by name. (No comment on whether that's still true for me.)

Researchers found the explanation in those handy-dandy MRI scans. According to Cosmo, staying awake for that long intensifies the brain's salience network, which is responsible for linking "sensory stimuli... to signals of pleasure." You know what's pretty stimulating? High-fat foods like French fries that look and smell delicious. When your sleep-deprived brain is confronted with a bunch of French fries, the sight of which are now even more connected than usual to your neural pleasure centers, it's pretty hard to resist eating everything in sight. Did I mention sleep deprivation is also associated with less self-control?

This is far from the only research to show how vital a good night's sleep is to your health. Studies upon studies have demonstrated the negative effects of sleep deprivation, from the effect on your cognitive performance to its acceleration of skin aging. Getting your snooze on is pretty important, no matter how much you may love coffee, and it only gets more critical as you age. (Luckily, there's actually data showing that sleep gets better as you age, despite the common wisdom.) So if you're trying to eat healthier, you might want to keep all this in mind next time your coworker invites you out dancing when you know you have to catch a 7 a.m. flight the next morning.Or, you could just go out anyway and be sure to avoid any and all McDonald's drive-throughs the next day, because YOLO.