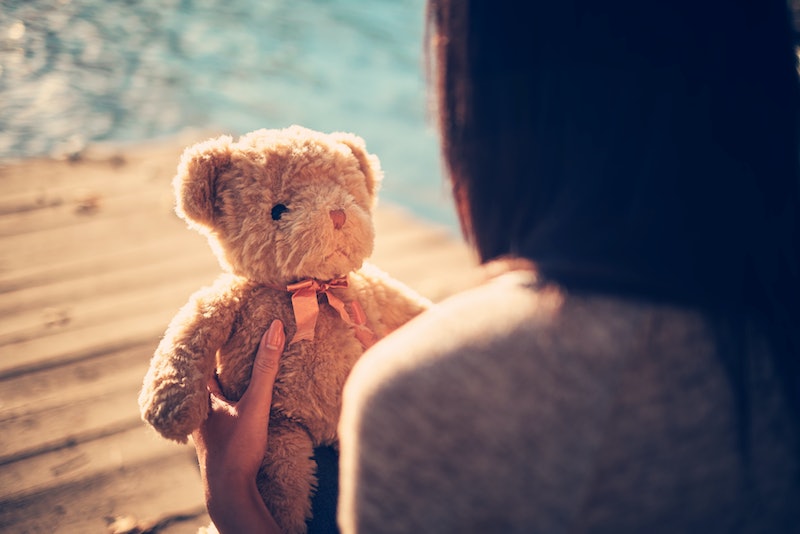 Do you have a prized stuffed animal from your childhood? Is it in your (otherwise very grown-up) apartment right now? If so, you're certainly not alone: teddies and other comfort objects are very common: 60 percent of small children have them (and up to 35 percent of adults!). Older conventional wisdom from the 1970s suggested that kids who depended on "loveys" were somehow lacking in secure attachment to their mothers, and that this dependence would threaten their proper development into well-adjusted adults. However, not too long ago studies began to suggest that comfort objects don't threaten children's mental health, and may indeed be developmentally advantageous.

Children with comfort objects are less shy and more focused than children without them. This is probably because the comfort object, or "transitional object," helps the child to feel brave in unfamiliar situations by its presence, and because the child learns to interact with the object in a low-pressure environment (teddy doesn't judge!).

Even newer research shows that children anthropomorphize toys only when it is their comfort object. In other words, children don't really (mistakenly) believe that all of the inanimate objects around them have inner psychological lives, but they do empathize with that special teddy. Having an emotional attachment to the comfort object tempts the child to think of it as a human-like friend, even if they know on some level that it's not. They can practice telling stories to, and thinking from the perspective of, this atypical "friend."

Still think that comfort objects show immaturity and lack of mental sophistication? Notice that children show a strong aversion to "copying" their comfort objects, and reject apparently identical replacements. That children believe their objects have special essences has already been learned the hard way by any parent who tried to quickly purchase a replacement stuffed animal when the original went missing — the child thinks the impostor animal is a stranger, who can't possibly fill the shoes of its predecessor. I know that when I left Brownie (pictured) at a rental-car bus shelter at the San Francisco airport and believed she was lost forever, I cried until I broke the blood vessels under my eyes (and I was well over 10 years old at the time).

Comfort objects like stuffed animals really do have special properties to children, and are not just soft things for them to grab when they feel sad or lonely. They require a complex web of beliefs to support in this role, since having one does not otherwise lead children astray in understanding the world. So, far from being "wacky toddler behavior," choosing a comfort object, conferring unique properties upon it, and treating the object as a sacred part of daily rituals is actually extremely sophisticated behavior on the part of small children. If you have a comfort animal, or meet a kid who has one, let the cuddles begin — it's a perfectly healthy, if slightly weird, human behavior.