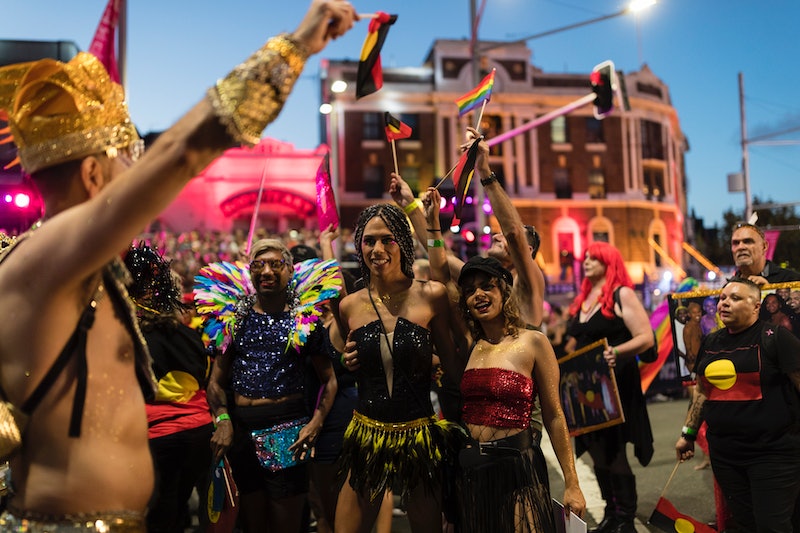 It's hard to believe that Mardi Gras celebrations were ever more than just a bead throwing, alcoholic beverage drinking, jazzy New Orleans-based celebration. But Fat Tuesday has a surprisingly rich backstory (for instance, the reason why Mardi Gras is called Fat Tuesday might surprise you). And perhaps we should all know its powerful origins so we have the ability to celebrate properly, our brains chock-full of fresh Fat Tuesday knowledge.

According to historians (and, um, History.com), it all began thousands of years ago as a few local celebratory events honoring spring and fertility among Roman Catholics. Then the debauchery spread to other European countries such as France, Germany, England, and Spain, because, duh, everyone loves a good party, and finally made its way overseas to America with early settlers at the beginning of the 18th century. And the reason "Fat Tuesday" is the English translation of the French term "Mardi Gras" is because members of the Christian faith would stuff themselves with beef, bread, and anything else that was left in their homes on the last day before Ash Wednesday, which kicked off the 40 days of Lent leading to Easter Sunday.

So essentially, Mardi Gras was to them what every Sunday night before a new diet starting on Monday is to me. Huh. I'll analyze that one later.

Lent is a 40-day period of fasting and sacrifice, traditionally observed by Christians. And in order to find the strength and willpower within to go 40 days without your favorite edible things, the period of sacrifice needs to kick off the opposite way — with all the edible things your stomach can hold before you pass out covered in beads.

Fat Tuesday moved throughout the U.S. in the 1800s when French settlers threw parties in New Orleans and other French settlements across Louisiana. These parties consisted of masked balls, monstrous feasts, and people going wild in the streets. Since then, they've added multiple parades, decorating the floats of said parades, tossing beads, and the heavenly consumption of King Cake — a colorful ring-shaped doughy cake similar to coffee cake. And the color scheme wasn't just a random selection of hues selected by the drunken bead tossers. According to IBTimes, in 1892, Rex, the King of Carnaval (another name for Mardi Gras) chose purple for justice, gold for power, and green for faith.

Also, fun fact: Louisiana is the only state in the U.S. where Mardi Gras is a legal holiday. So if you aren't there this year, just go ahead and call in sick.