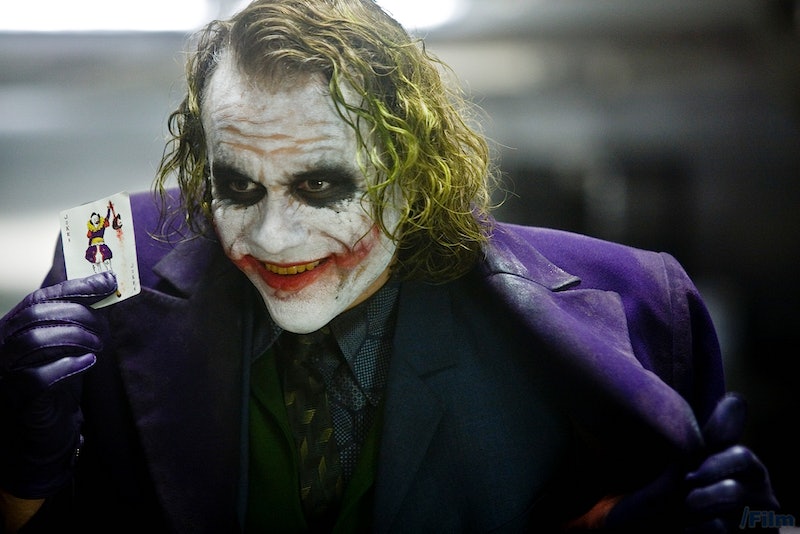 There are a lot of Batman villains, but one of the many things that sets The Joker apart is his very distinct set of scars in some of the comics, The Dark Knight, and the original Batman. But in the trailer for the next episode of Gotham, Jerome, a new character who's been promised to have more than just a few similarities to the Joker (even though Gotham hasn't confirmed that he's going to be the Joker exactly), there are no scars in sight, just a huge grin and a manic laugh.

Even though in The Dark Knight the Joker teases a few backstories for how he got his scars (leading to one of the most memorable lines in the movie), there's no reason really given — it's just one of many ways Heath Ledger's Joker is the inverse of Batman, a mysterious man who seemingly had no reason to exist before a superhero came to Gotham City, someone without any justification for how evil he is. He's just a purely chaotic spirit.

In Tim Burton's Batman, we see the origin of Joker's mangled face, and it's the result of some botched plastic surgery following an industrial accident that was supposed to kill "Jack," a mobster who was hooking up with the kingpin's young girlfriend. The doctor is able to repair Jack's face, but leaves his mouth in a permanent, terrifying grin not unlike a bad facelift. For some reason, the procedure also turns his face white, even though I'm pretty sure that's just so there can be a scene where the Joker wears makeup that drips off at a crucial juncture and reveals his deformed features to his horrified witnesses.

The next episode of Gotham is called "Red Hood," which is a reference to the Red Hood Gang that in one version of the Joker's origin, is responsible for pushing him into a vat of chemicals that leave his face deformed and scarred. But I don't quite know how all that will connect to the other big introduction in this week's episode, Mary Lloyd and John Grayson, at Haly's Circus, the place where their future son Dick Grayson, Robin the Boy Wonder, will work.

But it doesn't really matter how the Joker gets his physical scars — it's the emotional scars that really matter. Ultimately, the Joker's scars represent his scarred emotional state, how instead of a normal man he has an exaggerated, menacing sense of humor that leads him to commit violent acts that mean nothing to him.