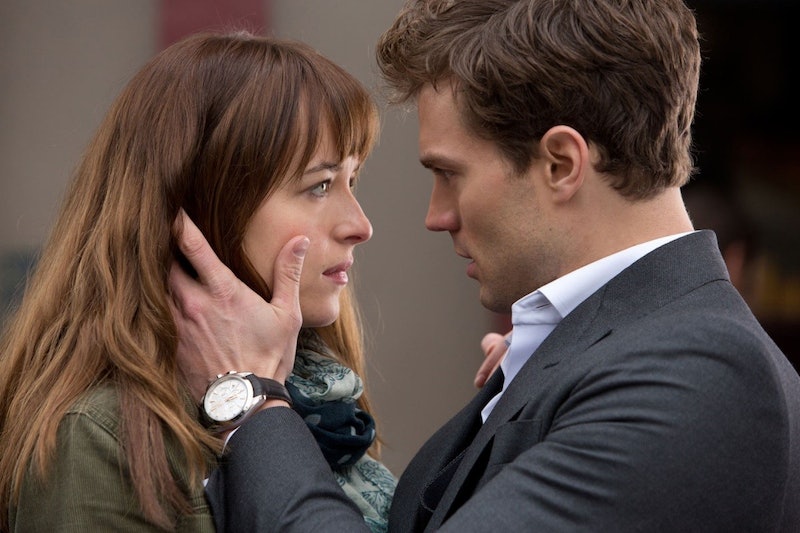 It was all because I refused to miss out on my friends' very own Parks and Rec-inspired Galentine's Day. Well, and because of my pesky curiosity. Whatever the reason, though, I went to see Fifty Shades of Grey, and went into the experience semi-blind, as I have never read the books. It's not like I didn't know what the film was about, though — it's sort of hard not to know, especially when your friends were infatuated with the books. But, I wasn't aware of the, um, specifics, so to speak. So, I figured I'd go. At the very least, the aesthetic would be pleasing, because, let’s face it, Jamie Dornan is a looker. And apparently, by all accounts, sex involving him was imminent.

Remember that hilarious episode of New Girl when Jess and Nick went to the hardware store and expertly parodied all of the double entendres that existed there in regards to their glaringly obvious sexual tension? Fifty Shades did this, similarly. Except we were supposed to take it seriously.

Am I honestly expected to believe that Christian Grey, a BILLIONAIRE businessman, has only No. 2 pencils at his disposal? There wasn't even a $1.99 pack of Bic pens laying around that office? (Does he watch tapes on his VCR and listen to albums on cassettes in his tricked out boom box? Does his secretary carve meeting notes into stone?) Anyway, that's actually the least of my worries. Pencils are truly forever ruined for me as they closed in on Anastasia toying with a pencil that read "GREY" in big bold letters in and around her mouth.

I was an English Major once. Before I denounced my own four years of study. Why? Because Ana's supposed to be an English Lit major and yet she doesn't punch Christian in the face after he delivers line after cliché line. And that just doesn't fly with me.

This may be not totally fair to attribute entirely to the movie as I've always been terrified to fly, but you know what? Anger isn't rational and these are my feelings: Spin me around in a death defying act on our second unofficial date and I. Will. End. You.

"Laters, Baby." Laters? As in future later times, but like, a lot of them all at once? HOW ABOUT NEVERS, BABY.

After seeing this movie it has come to my attention that every word of a contract is inexplicably sacred and I should have probably better looked through the iTunes update. And that thing I signed when I wanted to ride that bull when I was drunk. And my student loan agreements.

What a beautiful, classic instrument. The perfect place to brood post-domination and then dry hump on, therefore desecrating it and everyone who ever innocently let their fingers tickle the ivories.

They can make all "Emotional Damage" checks payable to Schroeder.

After Christian mama birded Ana with a squirt of Pinot that ran down her mouth mixed with two different salivas, I think I'm good on wine for... well, forever.

Nothing turns me on quite like a man delicately braiding my hair before hanging me from the ceiling by my wrists.*

*NO DISRESPECT TO CHRIS PRATT.

Gone are the days where slow-mo was used in films to sculpt cheesy yet sentimental montages of couples running to each other in a sun stroked field after an extended period of absence.

Now, slo-mo has helped us witness every detail of a sexual whipping.

13. Finally and most importantly: Theaters

No, not just movie theaters.

I just don't think I'll ever feel truly at home again after knowing that $247.8 million worth of people had a collective sexual experience in one on opening weekend.

I now see them as seedy, cheap motel rooms. Except no one is offering to take anyone out to breakfast afterwards.

THANKS FOR NOTHING, CHRISTIAN GREY.