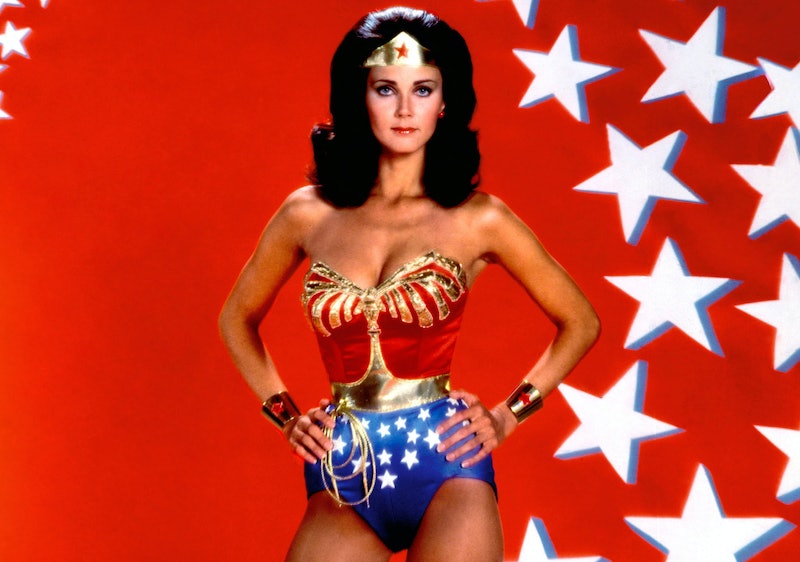 Our favorite Amazonian superhero is all the rage these days, and with a bunch of new films coming out devoted to her awesomeness, including her own starring vehicle 'Wonder Woman' in 2017, she's starting a bunch of conversations — not least about powerful women. Sure, everyone's waiting with excitement to see how a major action movie starring a female superhero will fare. But Wonder Woman's famous posture itself is also now being touted as a great shortcut for any woman feeling left out or hidden, particularly in the workplace. That's right, there's a new power pose in town, and it's called the Wonder Woman: hands on hips, feet wide apart, shoulders back, staring confidently forward. (No wonder Gal Gadot's Wonder Woman looks like the best bit of the upcoming Batman Vs Superman: Dawn Of Justice film — she clearly thinks she's awesome.)

The Wonder Woman power pose had its first major boost in a TED talk by Harvard sociologist Amy Cuddy in 2012, who talked at length about how standing like the Amazon warrior and pretending you're armed with your own lasso and headdress can communicate to others that you're serious, powerful, and in control. Standing in that "power pose" helped people in her study of the problem get hired for (fake) jobs, simply because they radiated confidence. It's since garnered a lot of attention, with one of Slate's journalists crediting it with helping her ask for a raise and negotiate a quick service with a dry-cleaner.

So let's look at the science behind the Wonder Woman pose, and why it's an idea you should spread — even if it doesn't make you feel like a glowing superhero right away.

The Science Of The Power Pose

The psychology of the power pose? It's all about taking up as much space as possible, looking big and visible; being the powerful person in a situation means extending yourself out as much as you can, even if you're a tiny 5'1". Other power poses include putting your feet on your desk, rolling your shoulders back and crossing your arms, planting your hands on the table and leaning forward, and, bizarrely, squinting slightly. Doing this stuff can apparently raise your testosterone levels by up to 20 percent, leading you to feel more dominant.

Perhaps more interesting, however, is the effect that the Wonder Woman pose has on the people doing it. Posture, we're now realizing, isn't just a way to communicate to an audience: it's actually a boost to your self-esteem. A 2012 study by scientists Pablo Binol, Richard Petty, and Benjamin Wagner on how body posture might affect "self-evaluation" — what we think of ourselves and our capabilities — showed that people who stood in a power pose (they called it "confident posture," with chest pushed out and erect spine) were much more prone to rate themselves more confidently than people in a "doubtful posture," slumped and self-contained.

So standing like Wonder Woman isn't just a way to look impressive when asking for a raise or arguing for your rights if you've been short-changed; it's a way to improve your own sense of self-worth. This is being touted as a shortcut if you happen not to have radiantly healthy self-esteem bursting out of your eyeballs. Fix your posture, pretend your invisible jet is just around the corner, and you might feel more in control of a situation as well as looking it.

Why Posture Is A Feminist Issue

It's pretty crucial to notice that the stance is the Wonder Woman stance, not the Superman one, even though he was pretty well-known for standing around with his hands on his hips too. It's an act that gives women a context in which to stand powerfully and make confident demands — particularly in the workplace, which is something we massively need.

Studies show that women often simply don't stand up and make themselves heard in office situations: a Business Insider survey from 2013 asked workers about gender equality, and many responded that they kept their heads down, hoping to be noticed on their merits. Meanwhile, the men were loudly praising themselves, putting themselves forward, and standing like Wonder Woman all over the place.

Whether you believe that this "confidence gap" is an inherent quality holding women back in the male-dominated world, or you think that our lack of confidence just comes from well-founded insecurity about our position in the workforce, taking command definitely seems like a good way to inject feminist power into the proceedings.

I personally am very tired of being told that women need to "act more like men" to get ahead — and, despite all the woman-positive Lean In conversations, that's still largely what we're being told. The idea of being "powerful" is still very much confused with being "masculine."

But the Wonder Woman stance is an excellent feminization of power. Ladies can be in control, and they don't need to act like men to do it. They can act like Amazons, instead.

More like this
8 Epic Must-See Moments To Relive From The Lionesses’ Euros Win
By El Hunt
It’s Official: 'The Bachelorette' Is No Longer A Fairy Tale
By Samantha Allen
Beyoncé & Madonna’s “Break My Soul” Remix Honors A Group Of Black Icons
By Stephanie Topacio Long
Beyoncé Shared A Rare Photo Of All 3 Kids Ahead Of Her ‘Renaissance’ Album Drop
By Radhika Menon
Get Even More From Bustle — Sign Up For The Newsletter