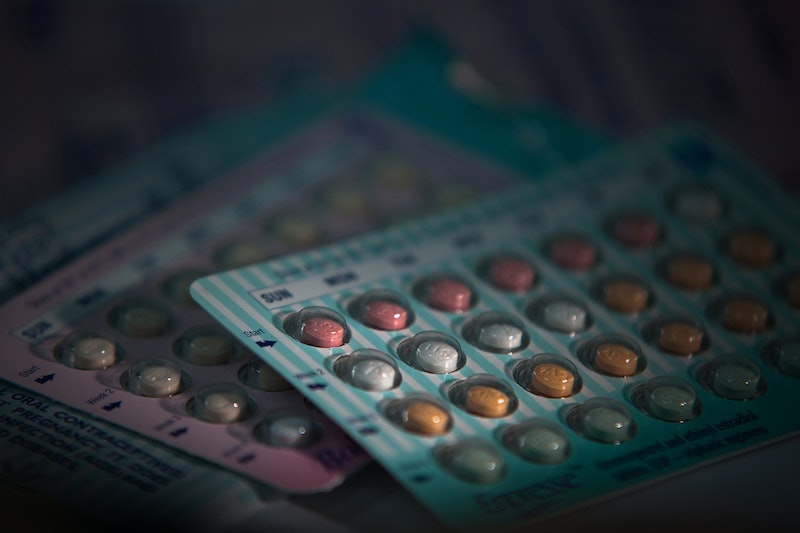 If your birth control isn't surgical — as in, you don't have an IUD or an implant that prevents pregnancy, and you haven't had a birth control shot — then you're going to have some equipment to store. Unfortunately, though, when people are handing out condoms or prescribing the Pill, they rarely specify that you need to store them correctly, which can be a massive problem. Keeping birth control in the wrong conditions can reduce its efficacy and increase the risk of bacterial nasties in your intimate parts. That is the opposite of a fun situation.

It's not like most birth control methods are seriously delicate; they're usually made to withstand as much as possible, because people have busy lives and can't keep everything in laboratory conditions. However, there are some precautions you need to take to do things correctly, from keeping them at the right temperature to avoiding damaging their surfaces. And some are touchier than others: the NuvaRing and other birth control implants you do yourself require some attention to detail, (and I'm not just talking about in putting them in properly which is hilarious in and of itself).

Optimum place: Not your wallet. At least not long-term. Keeping a wallet in your purse "just in case" might seem useful, but sticking it in and forgetting about it is a massive risk: the friction of opening and closing your wallet, and of other things rubbing against it, might rip the condom or cause tiny holes, even if it's safe inside the packet.

If you really want to keep them on you and don't want to simply pull one out of your stash for the nights you think you'll get lucky, keep them in a separate coin purse or bag, or an Altoids tin, and replace them regularly so they don't expire.

Do not keep the Pill in your bathroom, even in a sealed cabinet. It has to be kept away from moisture and excess heat, and your showers are not helpful. Otherwise, storing it is pretty straightforward: keep it tightly sealed, don't take the pills out of the packaging until you take them, and try to keep it at room temperature.

The NuvaRing and similar products are a little touchier than pills or condoms: they need to be kept under 85 degrees fahrenheit at all times, and for the first four months of their life span they need to be stored at under 77 degrees. The NuvaRing is also definitely not allowed to live in your purse. The pharmacist who gives you the NuvaRing needs to keep them in the fridge, but that's not necessary for you — and it can't be thrown down the toilet when you're finished with it.

Ortho Evra and patches like it, which you apply once a week for the first three weeks of your cycle, mostly get attention on the slapping-on stage, to avoid damaging them or putting them on skin that gets too much sun. But the patch has temperature requirements before you put it on: it needs to be kept at 77 degrees F, although you can get away with hotter or colder temperatures very briefly, and it needs to be kept in a dark, dry place. So the bathroom is, once again, out.

If you clean and store a diaphragm properly, it can last for up to three years (longer if it's silicone) but it needs care. Don't store it with oil-based lubricants or powders, make sure it's washed with soap and warm water before you put it away each time, and examine it regularly to see if the silicone or latex is damaged in any way. It'll come with its own nice storage container, where it should live: don't be tempted to get something that looks fancier.

The cervical sponge is designed to soak up sperm, so obviously it needs to be discarded immediately after each use. But it's not the sort of sponge you can chuck in with the kitchen wipes while you're waiting to use it. Because it contains spermicide, it needs to be kept somewhere very clean, cool, and dark. And don't get one wet: that activates the spermicide and it needs to be used immediately or thrown out.