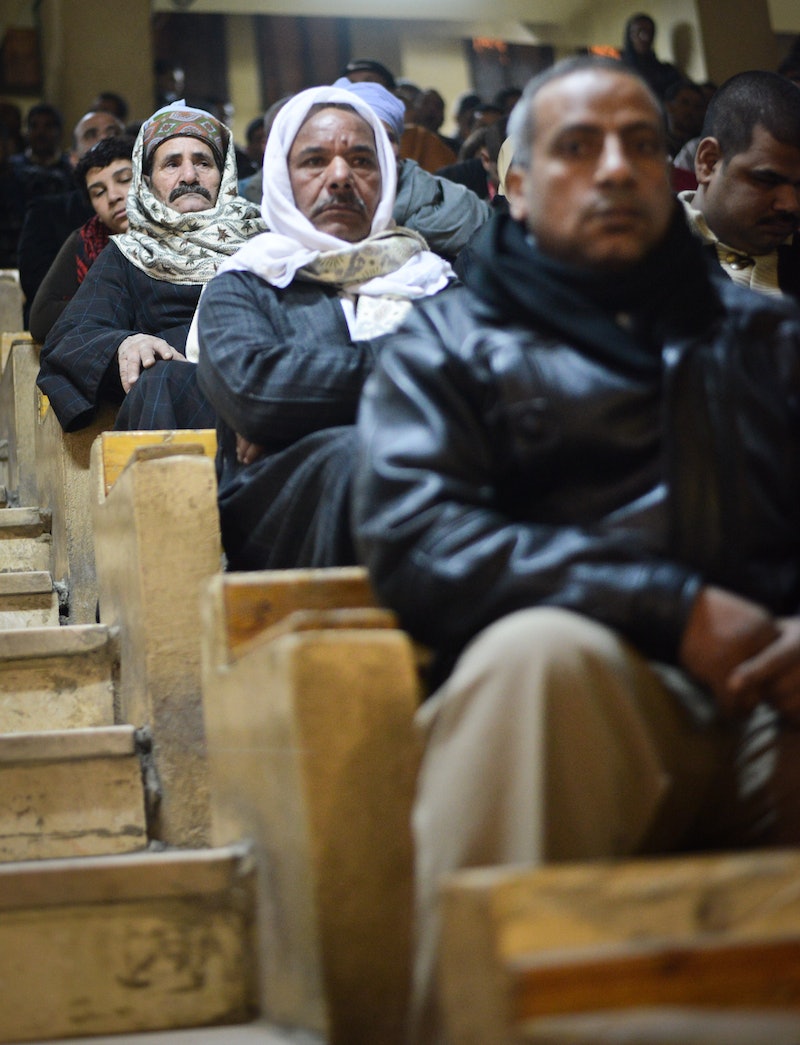 On Sunday, a video released by the extremist group showed ISIS purportedly beheading 21 Coptic Christians abducted in Libya, after frantic efforts by the Egyptian government to respond timely to the kidnapping of its almost two dozen Christian citizens appeared to have failed. The video detailed the captives in orange jumpsuits on a beach, being forced onto their knees as one of the militants, dressed different from the others' black attire, addressed the camera in English with a North American accent, referring to the Christian Egyptians as "crusaders." He said:

All crusaders: safety for you will be only wishes, especially if you are fighting us all together. Therefore we will fight you all together. The sea you have hidden Sheikh Osama Bin Laden’s body in, we swear to Allah we will mix it with your blood.

The militants then lay them face-down on the sand before beheading them. The speaker also said that the beheadings were revenge for "Muslim women persecuted by Coptic crusaders in Egypt."

Widely shared on the Twitter accounts of the group's supporters, the five-minute video is entitled “A Message Signed With Blood To The Nation Of The Cross." Like previous execution videos released by the group, the footage is reportedly slickly edited with high production values. Multiple media agencies said they were not able to verify the video's authenticity.

Many Egyptians live and work in Libya — itself facing a highly unstable political situation — and the Egyptian government has warned its citizens not to travel there, and for those already there to avoid high-tension areas. Egypt's largest Christian minority group, the Copts, have recently been targeted by ISIS, and Friday's release of the pictures of the 21 abducted Coptic Christians prompted the Egyptian government to offer to evacuate thousands of its citizens, who are guest workers in Libya.

The mass beheading sparked criticisms of the government's handling of the situation. Mina Thabet, a researcher at the Egyptian Commission for Rights and Freedoms, told The Guardian that Egyptian officials were to blame for the executions because of what he said was a delayed response to the hostage crisis. Thabet added:

There is blood on the hands of the authorities who could have saved them but failed to.

Egyptian President Abdel Fattah al-Sisi called for an urgent meeting of the country's top national security officials and declared seven days of mourning. Despite its earlier refusal to declare ISIS militants apostates — to much criticism within the Islamic community — Al Jazeera reported that Al-Azhar, the prestigious Cairo-based center of Islamic learning, denounced the killings in a statement:

Al-Azhar stresses that such barbaric action has nothing to do with any religion or human value.

Those executed were reportedly captured in Sirte, a coastal city that was Libyan dictator Muammar Qaddafi’s hometown that ISIS claims to have control over. Following his violent murder in 2011, Libya has been mired in a manifold civil war pitting a ragtag coalition of armed supporters of the elected government against Islamist fighters. The chaos has made the country ripe for ISIS to expand its territory outside of Iraq and Syria in its bid to establish a caliphate.