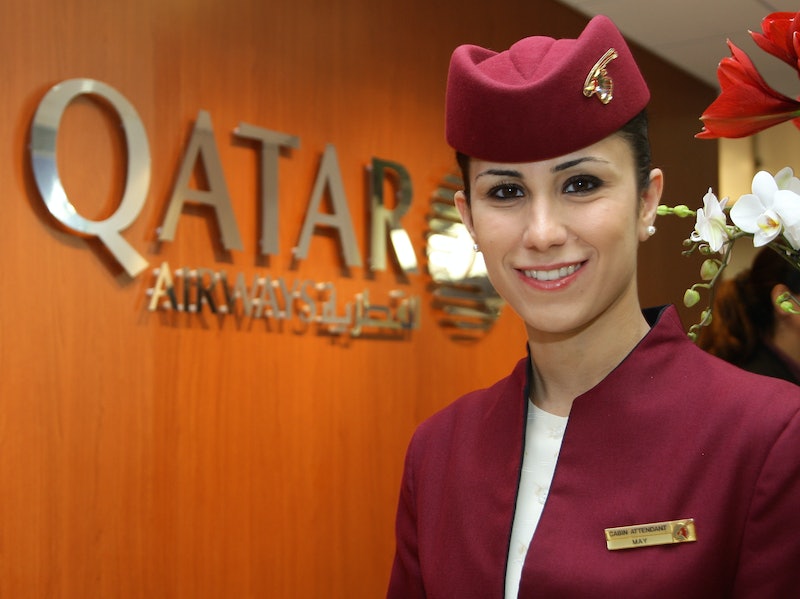 Update: Following the publication of this post, a Qatar Airways representative reached out with additional information. The airline clarified that its employment contracts use the term "single status," a common term of employment in the Gulf region which means that the company is paying for the employee's living expenses, but no additional expenses (as would be incurred by the primary breadwinner of a family). Cabin crew do not need to remain single. Additionally, Qatar Airlines notes that many members of its cabin crew are married and that crew members no longer have to ask permission to marry. Finally, the airline defends its pregnancy notification requirement on the grounds of "regulatory, health and safety reasons."

Being a flight attendant in 2015 is more about facilitating passenger comfort and safety than serving as eligible eye candy... right? Wrong! With its super retrograde policies and unapologetic management, Qatar Airways is taking its flight attendants (or "stewardesses," as they used to be known) on a throwback to the mid-1900s. Not only does the airline require its employees be single, Qatar Airways depends on the fact that young women in need of jobs will agree to these super strict rules.

How bad are the Qatar Airways policies, you ask? Pretty bad, as reported in the Washington Post:

According to the International Transport Workers’ Federation, a major trade union group, female flight attendants can only be hired by Qatar Airways if they’re single. They must remain so for five years after starting work. If they want to marry, they have to ask the airline’s permission. If and when they get pregnant, they must notify the airline as soon as they know. Even though pregnancy is a breach of contract and can lead to firing.

That's right — you have to promise you're single to get a flight attendant job with Qatar, and stay that way for five years, even if dating or marrying would have had no effect on your performance in the actual position. You also have to notify your employer as soon as you find out you're pregnant.

To be fair, other Asian airlines are somewhat strict with their requirements of (female) flight attendants, too: hair color, hair style, makeup, and even nail length choices are closely policed. Beauty pageant-style competitions amongst new or prospective crew members are not unheard of, and may even include a swimsuit segment. Still, Qatar seems like the worst offender even amongst a bad bunch, and its higher ups refuse to back down from their policies even when they come under fire in the media.

As a libertarian, I think companies should be legally allowed to hire whoever they want (and for whatever reasons, and on whatever terms). But that certainly doesn't mean that we have to approve of these choices. Public opinion and pressure from consumers changed companies' policies in the civil rights struggles of the past, and they'll continue to do so in the future. Keep your dollars away from airlines who require their female employees sign their whole lives over to their draconian employers. And for a quick (uplifting) historical look at how far many other airlines and their flight attendants have come over the past few decades, check out this slideshow on flight attendants from the Chicago Tribune.